Ten days after they were rescued in the Mediterranean Sea, Italy has allowed all the migrants stuck on an Italian coast guard ship to disembark.

Early Sunday, 137 migrants left the Diciotti, stepping onto the dock at Catania, Sicily, where police photographed them for ID checks, a requirement for asylum-seekers.

Italy's populist government had not let them leave the ship earlier, demanding that other European Union countries take them. Only Ireland did, pledging to take 20. Non-EU Albania will take 20, while Italian Catholic bishops said they would care for about 100.

On Aug. 16, the Diciotti's crew rescued 190 migrants, most from Eritrea, from a smuggling boat. The others, including minors and ailing migrants, were allowed off earlier.

Italy has threatened economic reprisals against the EU for not helping it enough with migrants.

Italian Prime Minister Giuseppe Conte announced the end of 10-day standoff over the asylum-seekers Saturday, but made clear Italy could avenge a perceived lack of overall European Union solidarity by refusing to approve the bloc's next multi-year budget.

"Italy must take note that the spirit of solidarity is struggling to translate into concrete acts," Conte said in a statement. Conte referred to declarations made at an EU summit in late June promising to help Italy and other  Mediterranean countries deal with the burden of migrants rescued from human traffickers' unseaworthy boats.

In his role as head of a nearly three-month-old populist coalition government, Conte said Italy under current conditions "doesn't consider it possible to express adhesion to a proposed budget that underpins a policy so incoherent on the social level." 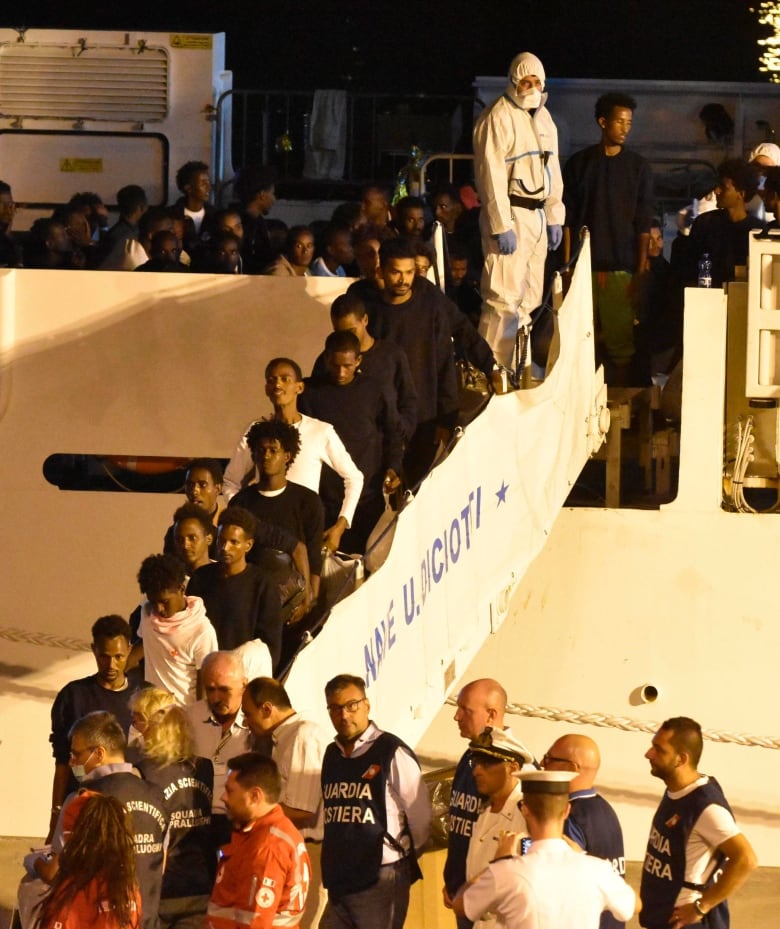 Ireland pledged to take 20 of the migrants, while non-EU Albania will take 20, and Italian Catholic bishops said they would care for about 100. (Orietta Scardino/Associated Press)

Earlier in the week, some in Italy's government threatened to withhold nearly 20 billion euros ($ 30 billion Cdn) in contributions to the EU if member nations didn't volunteer to take the last group of rescued migrants reaching Italy. Brussels sharply reminded Italy it was legally obliged to pay.

Interior Minister Matteo Salvini, who leads the anti-migrant League party, refused to let the migrants off the coast guard vessel Diciotti until other EU nations pledged to take the asylum-seekers, most of them young men from Eritrea.

Just before Conte announced the drama's resolution, Salvini told party supporters at a rally in northern Italy that a Sicily-based prosecutor, Luigi Patronaggio, had put him under investigation for suspected abduction for refusing to let the migrants disembark.

If the prosecutor "wants to interrogate me or even arrest me because I defend the borders and security of my country, I'm proud of it," Salvini tweeted. Many of his supporters blame migrants for crime.

Earlier in the week, the government's rights office for detained persons concluded this week that the migrants were being unjustly held by the government.

Salvini took credit for convincing bishops to take many of the migrants. The bishops agreed to "open up their doors, heart and wallet," he told the rally.

Fifty others of the 190 people rescued at sea on Aug. 16 by the Italian coast guard were previously allowed off the ship, including all the minors and ailing adults. 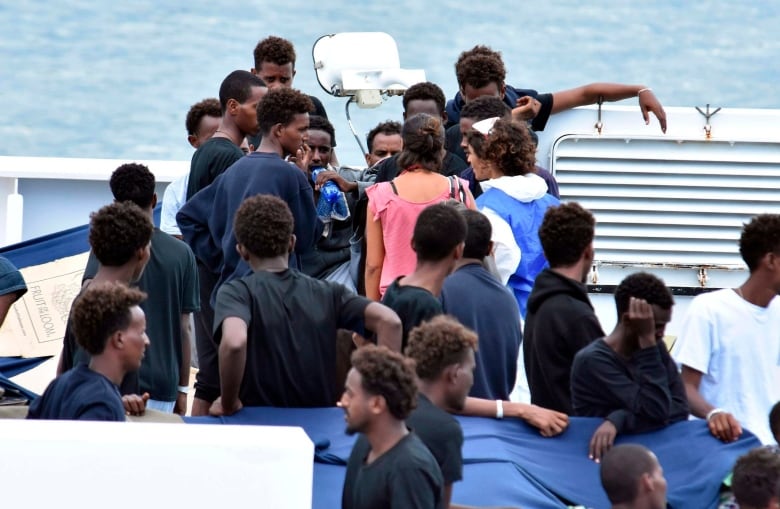 Rescued on Aug. 16 in the Mediterranean Sea, minors and the sick were allowed off the Italian Coast Guard ship Diciotti in recent days. (Orietta Scardino/ANSA/AP)

A few hours before Conte's announcement, Italian Red Cross ambulances waiting at dockside took away six ill men, suspected of having tuberculosis, pneumonia or other infections, and seven of the 11 women who were still aboard.

Authorities had said the women recounted how they had been raped while in Libya for months, awaiting the opportunity to leave in migrant smugglers' boats.

Four other women chose not to leave the ship because their husbands were blocked aboard.

'Race to the bottom'

The standoff prompted an impassioned appeal by the UN refugee agency's chief to Italy to let them disembark and to EU countries to take responsibility for the asylum seekers, most of them young men fleeing harsh conditions in Eritrea.

UN High Commissioner for Refugees Filippo Grandi, speaking in Geneva, said it's time to end a "race to the bottom on who can take the least responsibility for people rescued at sea."

He urged European countries "to do the right thing and offer places of asylum for people rescued from the Mediterranean Sea in their time of need." 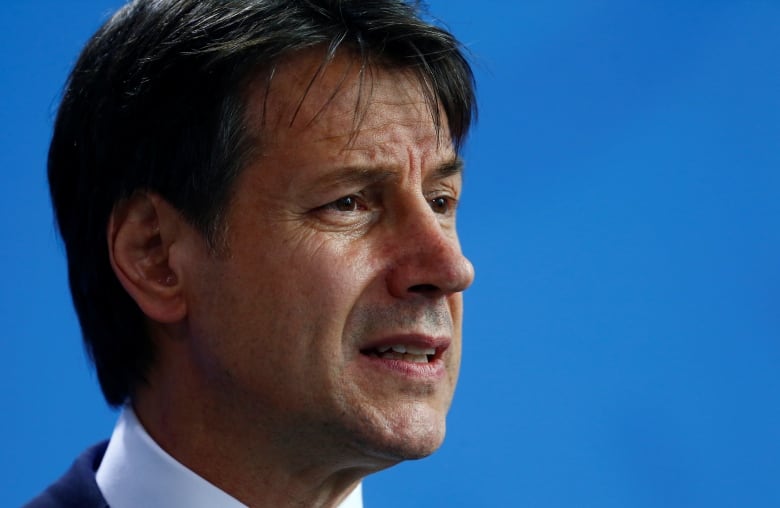 Albania, which isn't in the European Union, saw thousands of its citizens flee to Italy across the Adriatic Sea aboard dramatically overcrowded rickety ferries and fishing boats in hopes of a better life in the 1990s.

'More than a health emergency'

Prosecutors would have to seek the government's permission to question a minister.

Local Italian Red Cross official Stefano Principato told reporters that Italy's health minister ordered an inspection of sanitary conditions for the migrants, who have been sleeping on the ship's deck and coping since Aug. 16 with a baking sun and limited toilet facilities.

Doctors have said many of the migrants on the ship have scabies but "more than a health emergency, it would be better to speak of a psychological emergency," Principato said.