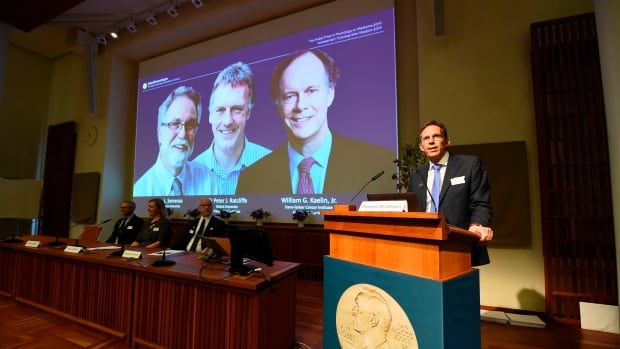 The 2019 Nobel Prize for Physiology or Medicine has been awarded to scientists William G. Kaelin, Jr, Peter J. Ratcliffe and Gregg L. Semenza for their discoveries of “how cells sense and adapt to oxygen availability,” the Nobel Committee announced Monday.

The discoveries made by the three men “have fundamental importance for physiology and have paved the way for promising new strategies to fight anemia, cancer and many other diseases,” said the Karolinska Institute.

The trio — Kaelin and Semenza are Americans, and Ratcliffe is British — will share equally the 9 million kronor (around $ 1.2 million Cdn) cash award. It is the 110th prize in the category that has been awarded since 1901.

Kaelin works at Harvard, Semenza at Johns Hopkins University and Ratcliffe is at the Francis Crick Institute in Britain.

In announcing the prize, the Nobel Committee said the work by the three laureates has “greatly expanded our knowledge of how physiological response makes life possible.” The Committee said that Semenza, Ratcliffe and Kaelin found “the molecular switch for how to adapt” when oxygen levels in the body vary, noting that the most fundamental job for cells is to convert oxygen to food and that cells and tissues constantly experience changes in oxygen availability.

BREAKING NEWS:<br>The 2019 <a href=”https://twitter.com/hashtag/NobelPrize?src=hash&amp;ref_src=twsrc%5Etfw”>#NobelPrize</a> in Physiology or Medicine has been awarded jointly to William G. Kaelin Jr, Sir Peter J. Ratcliffe and Gregg L. Semenza “for their discoveries of how cells sense and adapt to oxygen availability.” <a href=”https://t.co/6m2LJclOoL”>pic.twitter.com/6m2LJclOoL</a>

Thomas Perlmann, the secretary of the Nobel Committee at the Karolinska Institute, said he was able to call all three laureates Monday. But he reached Kaelin via his sister who gave him two phone numbers — the first one was a wrong number.

“He was really happy,” Perlmann told a news conference.

The announcement kicked off Nobel week. The Nobel Physics prize is handed out Tuesday and the following day is the chemistry prize.

This year’s double-header Literature Prizes — one each for 2018 and 2019 — will be awarded Thursday and the Peace Prize will be announced on Friday.

The economics prize will be awarded on Oct. 14.

The 2018 literature prize was suspended after a scandal rocked the Swedish Academy. The body plans to award it this year, along with announcing the 2019 laureate.

Prize founder Alfred Nobel — a Swedish industrialist and the inventor of dynamite — decided the physics, chemistry, medicine and literature prizes should be awarded in Stockholm, and the peace prize in Oslo.

The economics prize — officially known as the Bank of Sweden Prize in Economic Sciences in Memory of Alfred Nobel — wasn’t created by Nobel, but by Riksbanken, Sweden’s central bank, in 1968. It is the Royal Swedish Academy of Sciences that was tasked with selecting the winner.