Forty-one people on board a Russian Aeroflot passenger plane were killed on Sunday, including two children, after the aircraft caught fire as it made a bumpy emergency landing at a Moscow airport, Russian investigators said.

Television footage showed the Sukhoi Superjet 100 crash bouncing along the tarmac at Moscow’s Sheremetyevo airport before the rear part of the plane suddenly burst into flames.

Many passengers on board SU 1492 then escaped via the plane’s emergency slides that inflated after the hard landing.

The plane, which had been flying from Moscow to the northern Russian city of Murmansk, had been carrying 73 passengers and five crew members, Russia’s aviation watchdog said.

Svetlana Petrenko, a spokesperson for Russia’s Investigative Committee, said in a statement that only 37 out of 78 people on board had survived, meaning 41 people had lost their lives.

No official cause has been given for the disaster.

The Investigative Committee said it had opened an investigation and was looking into whether the pilots had breached air safety rules.

“We took off and then lightning struck the plane,” the Komsomolskaya Pravda daily cited one surviving passenger, Pyotr Egorov, as saying.

“The plane turned back and there was a hard landing. We were so scared, we almost lost consciousness. The plane jumped down the landing strip like a grasshopper and then caught fire on the ground.” 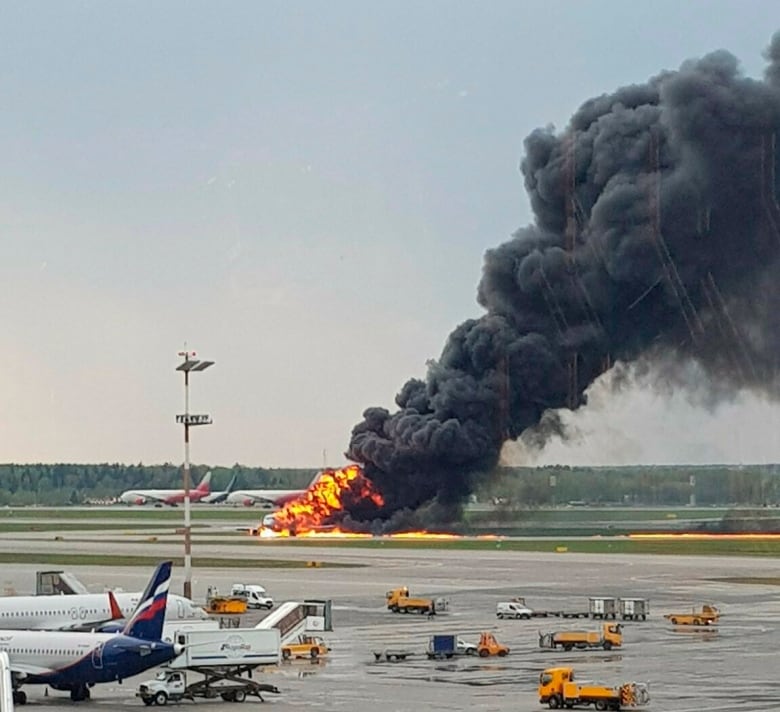 Thick black smoke billowed from the plane after it landed Sunday. (Riccardo Dalla Francesca via AP)

State TV broadcast mobile phone footage shot by another passenger in which people could be heard screaming.

President Vladimir Putin and Prime Minister Dmitry Medvedev expressed their condolences and ordered investigators to establish what had happened.

The Interfax news agency cited an unnamed “informed source” as saying the evacuation of the plane had been delayed by some passengers insisting on collecting their hand luggage first.

Russian news agencies reported that injured passengers were being treated in hospitals.

Debris in the engines

The Flightradar24 tracking service showed that the plane had circled twice over Moscow before making an emergency landing after just under 30 minutes in the air.

The plane’s under-carriage gave way on impact and its engines caught fire.

Interfax cited a source as saying the plane had only succeeded making an emergency landing on the second attempt and that some of the aircraft’s systems had then failed.

The emergency landing was so hard that debris had found its way into the engines, sparking a fire that swiftly engulfed the rear of the fuselage, the same source said. 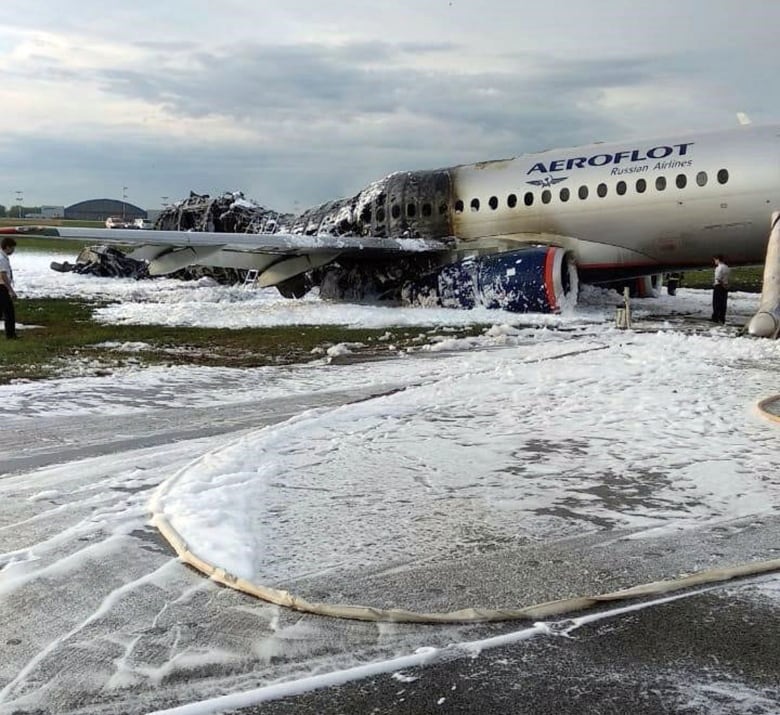 The Sukhoi SSJ100 operated by national airline Aeroflot had 73 passengers and five crew members on board. (Moscow News Agency photo via AP)

Russian investigators said they were looking into various versions.

Russian news agencies reported that the plane had been produced in 2017 and had been serviced as recently as April this year.

Aeroflot has long shaken off its troubled post-Soviet safety record and now has one of the world’s most modern fleets on international routes where it relies on Boeing and Airbus aircraft.

Russian officials are keen for Aeroflot to buy more Sukhoi Superjets, a regional airliner, for domestic flights to support the country’s fledgling civil aircraft industry. The plane is built in Russia’s Far East. 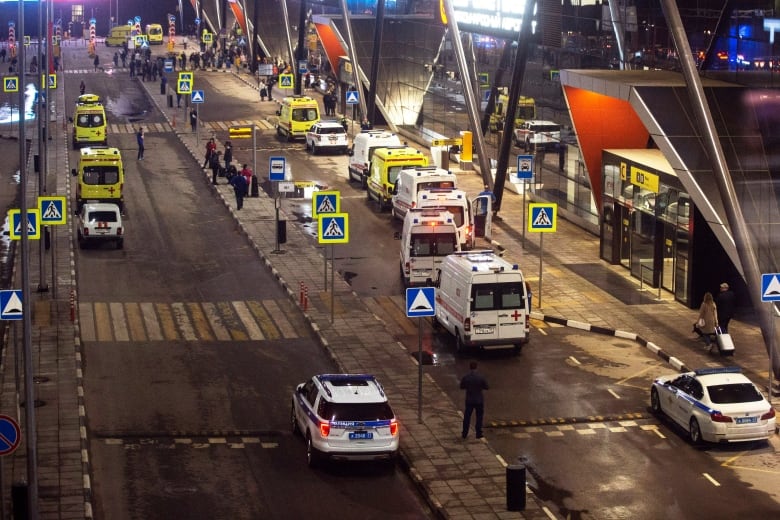 Emergency service vehicles are parked at the entrance of Sheremetyevo airport in Moscow on Sunday. (Alexander Zemlianichenko/Associated Press)

A Sukhoi Superjet crashed in Indonesia in 2012, killing all 45 people on board in an accident blamed on human error.

The Superjet entered service in 2011 and was the first new passenger jet developed in Russia since the fall of the Soviet Union.

It has been hit, however, by sporadic concerns over safety and reliability, including a December 2016 grounding after a defect was discovered in an aircraft’s tail section.

Russian officials said on Sunday it was premature to talk of grounding the Sukhoi Superjet for now. The plane is predominantly used by Russian airlines like Aeroflot, but is also used by a few other foreign operators, including a low-cost Mexican airline.

Dozens of flights at Sheremetyevo were delayed because of the disaster.