STAVANGER, Norway – If Canada is going to claim its first-ever mixed doubles world curling title, the duo of Jocelyn Peterman and Brett Gallant will have to battle through more nations than ever before.

In the largest mixed doubles field in world curling history, 48 teams make up this year’s championship in Stavanger, Norway. In fact, five teams are making their world curling championship debuts — Kosovo, Nigeria, Saudi Arabia, Ukraine and Mexico are all hitting the pebbled ice for the first time at an elite event.

Peterman, 25, joins her partner Gallant, 29, to make up Canada’s mixed doubles team. They earned the right to wear the Maple Leaf by winning the national championship last month in Fredericton.

“The ice was great for practice today. We got a lot of out of that. The rocks were in perfect condition,” Gallant said after their hour-long practice Friday, before competition begin Saturday.

Both Gallant and Peterman have worn the Canadian colours at world events before, so this is nothing new for the team.

“The world championships to us is something we look forward to,” Gallant said. “We relish this opportunity. We’re comfortable here.”

Peterman says this one is extra special. The two are not only a couple on the ice, but off it as well.

“It’s pretty cool, actually. I hadn’t stopped to think about that, wearing the Maple Leaf together. It’s awesome,” Peterman said.

“Brett is the best teammate I could ask for. I wouldn’t want to be here with anyone else.”

Canada is in a pool with seven other teams — Belarus, Denmark, Hong Kong, Japan, Romania, Sweden and Ukraine. Their first game is Saturday afternoon against Romania.

Canada will also have two key games within its pool against Sweden and Japan.

Other notable names in the field include 2018 mixed doubles Olympic bronze-medallists Kristin Skaslien and Magnus Nedregotten of Norway, and 2018 men’s Olympic gold-medallist John Shuster and partner Cory Christensen of the United States.

This is the 12th time the mixed doubles world curling championship is taking place — never before has Canada won it all. In fact, over the years Canada has only won three medals at his event, one silver and two bronze.

But team coach and mixed doubles coordinator, Jeff Stoughton, says it’s not until recently Canada has started to put a serious emphasis on the newer discipline.

“We’ve got the right team this year to do it. I’ve been doing this the last three year and we finished fifth, got a silver and a bronze,” Stoughton said.

“I think we’re due for a gold medal.”

This is his fourth time traveling to worlds with Canada’s mixed doubles team. He says each year the Canadian teams are growing and learning different strategies. Stoughton was also coach of Canada’s Olympic gold medal mixed doubles win in South Korea las year, represented by Kaitlyn Lawes and John Morris.

Now Stoughton feels Peterman and Gallant are ready to bring another gold home to Canada.

“When you get down to the playoffs you just never know what’s going to happen. But the experience is there for these two to bring it home,” he said.

“We didn’t get a gold in the men’s or the women’s, it would be nice for mixed doubles to end it with gold.”

Switzerland has been the team to beat over the last number of years, including having won seven of the last 11 the mixed doubles title. 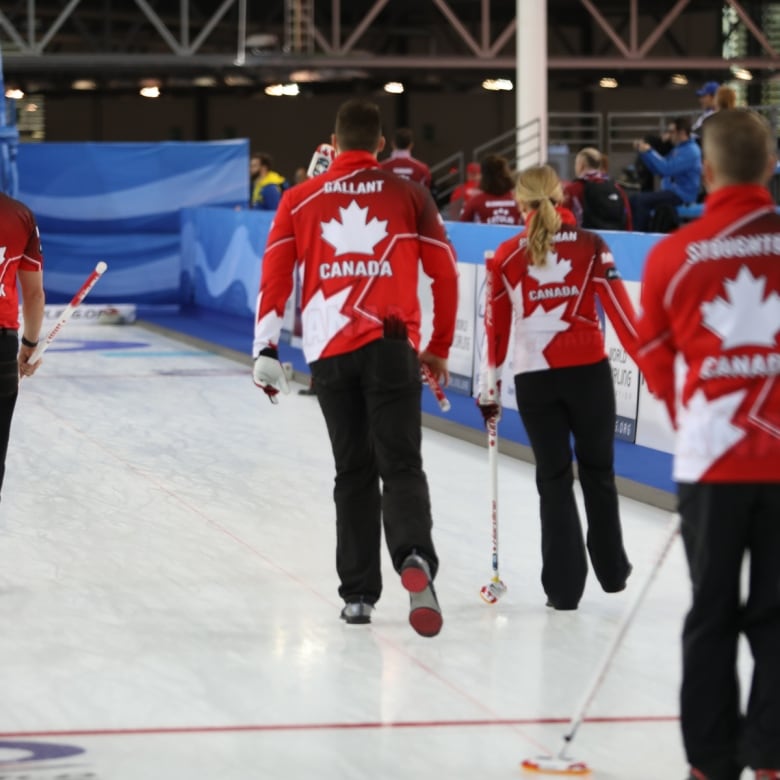 While the mixed doubles teams are duking it out on one side of the Sørmarka Arena in Stavanger, there are 43 senior teams from around the world competing on six sheets of ice on the other side.

There are 27 men’s teams and 16 women’s teams competing in this year’s senior world championships.

Anderson is the defending world champion. Her Saskatoon team won the senior title one year ago in Sweden.

The Canadian women begin their round robin matches against Russia on Saturday. Canada leads all countries in the women’s field with 12 golds over the 17-year span of the event.

Cochrane is also making his second world senior curling appearance. Two years ago he won silver after losing in the championship game. The Canadian men also start the competition against Russia on Saturday.

The Canadian senior men have an impressive history over the course of the 17-year event. It has advanced to the final in every edition since its debut in 2002. Canada has won 10 gold medals and seven silver medals.