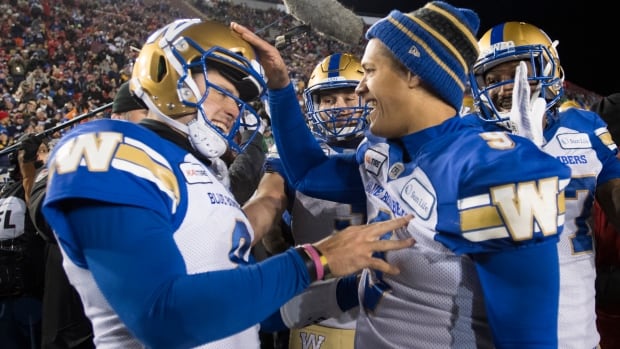 The Winnipeg Blue Bombers ended a 29-year championship drought by defeating the Hamilton Tiger-Cats 33-12 in the 107th Grey Cup from McMahon Stadium in Calgary.

Here’s a look at five big moments from the game:

Coming into this CFL title game, teams with the better turnover ratio had won 23 of the last 24 Grey Cups.

That might explain why the Bombers’ defence wasted no time trying to create some takeaways.

On Hamilton’s third offensive play from scrimmage, quarterback Dane Evans’ first pass in a Grey Cup went off the hands of Jaelon Acklin and right into the arms of Brandon Alexander for an interception.

That series of events led to the first points of the game as Andrew Harris scored on a 15-yard touchdown run on the very next play.

The tone set by Winnipeg’s defence was unquestionably the catalyst that led to their 15-point lead by halftime.

After scoring the game’s opening touchdown, Harris continued to show off his versatility on the CFL’s biggest stage.

Around the midway point of the second quarter, Harris put together his longest run of the first-half with a 21-yard carry. He then followed that up, on the very next snap, by making one of the plays of the game.

On an 18-yard pass from Chris Streveler, Harris stretched out for a diving catch in the end zone for his second touchdown of the half.

He picked up 88 yards in the first half alone, averaging 10.6 yards per carry.

Brandon Banks caught 5-of-6 targets for 67 yards in the first half, but this year’s most outstanding player was absent for much of the game’s final two quarters.

On Hamilton’s first play of the second half, Banks was injured when Bombers’ defensive back Mike Jones landed a big hit on the 31-year-old receiver. The league’s leading receiver left the game with a lower-body injury and wouldn’t return.

Banks was the CFL leader in catches (112), receiving yards (1,550) and touchdown (13). His departure from the game will have hindered any potential rally by the Ticats.

The Touchdown that wasn’t

Trailing 27-12 early in the fourth quarter, it appeared for a moment that Hamilton might be in the midst of a comeback.

On second and long, Evans heaved the ball 50 yards to wide-open Mike Jones, who had split a couple of defenders and found himself in a position to score.

But the Ticats wideout couldn’t corral the pass. He dropped the ball inside the five-yard line, preventing what could have been a game-changing play in this 107th Grey Cup.

To make matters worst, Jones was slow getting up and needed help getting off the field.

The Blue Bombers’ defence had already created four turnovers through three quarters and held one of the CFL’s most prolific offences to just 12 points.

However, that wasn’t enough for Winnipeg.

With under six minutes to go, Jefferson made sure Evans felt his presence once again. This season’s most outstanding defensive player came up with another strip-sack, before the Ticats recovered the loose ball.

However, on the very next play, Hamilton wasn’t so lucky.

On second and 26, Winnipeg’s defensive end Jackson Jeffcoat came up with a sack, strip and fumble recovery of his own.

It marking one of seven turnovers committed by the Ticats, and one of six sacks by the Bombers.