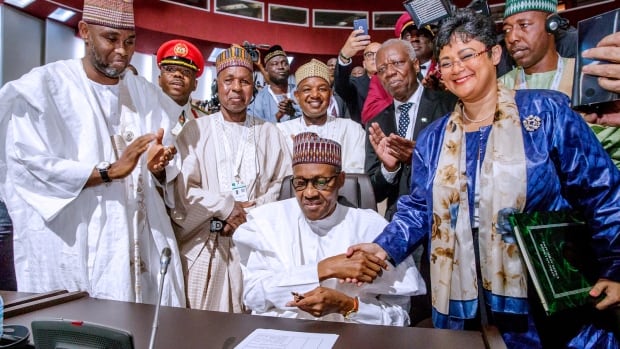 Several African heads of state gathered in Niger’s capital Sunday to launch a continent-wide free trade area that represents an estimated market of $ 3.4 trillion US.

The African Continental Free Trade Area aims to create a single unified market for the continent’s 1.3 billion people and to boost economic development.

The general agreement has been signed by 54 of Africa’s 55 countries, with only Eritrea not signing up. Eritrea did not sign because of its long-running conflict with Ethiopia, but with a new peace accord, Eritrea has asked to join trade talks.

The location of the zone’s headquarters and a timeline for the start of trading are expected to be announced at the African Union summit in Niamey, the capital of Niger.

The goal of the new free trade area is to significantly increase trade within Africa. Currently, African countries conduct only 16 per cent of their trade with each other, compared to 65 per cent among European countries, according to the African Union.

Many hurdles remain to creating an effective continent-wide trading area, including a lack of transportation infrastructure and border restrictions.

Another item to be discussed at the African Union summit is security in Niger and the surrounding Sahel region, which has seen a rise in jihadist violence.

The G5-Sahel security group, made up of Chad, Burkina Faso, Mali, Mauritania and Niger, was expected to encourage AU leaders to press the United Nations for more support fighting extremist violence.