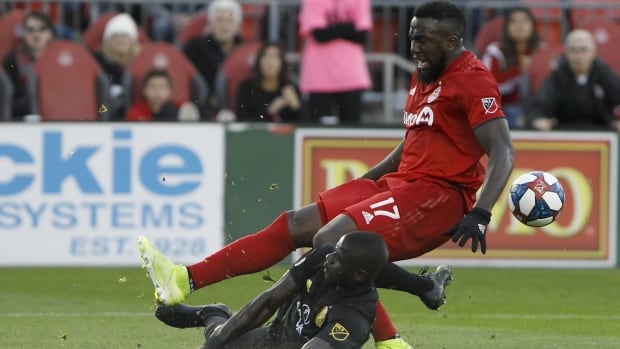 “The guys are progressing,” Toronto coach Greg Vanney said Tuesday before the team left for New York. “Omar did everything we needed him to do. Jozy came in early, got his work in. He’s going to see the doc and we’ll see where he’s at. But everything’s going to be tight.

Toronto’s Jonathan Osorio tallied twice in Toronto FC’s 5-1 victory over DC United to advance to the second round of the MLS playoffs. 1:21

“Again at this point you go with what you have and you’ve got to put out the guys who are ready to play. Hopefully on some level they’ll be ready for some portion of the game (Wednesday) but we won’t really know until we get there.”

Laurent Ciman started for Gonzalez on the weekend with Alejandro Pozuelo moving up front in the absence of Altidore. That opened up a space for French midfielder Nicolas Benezet.

Wednesday’s game has been shifted to Citi Field, home of the Mets, because of the Yankees’ playoff run.