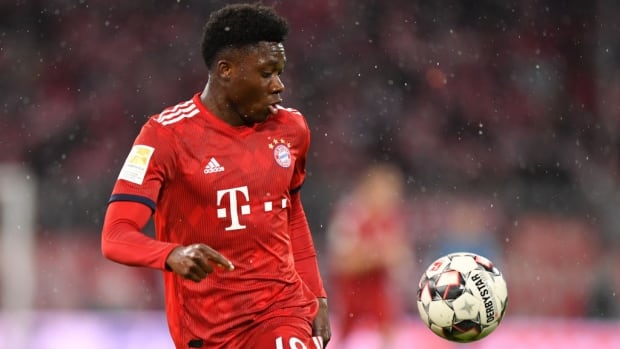 Canada will be without injured captain Scott Arfield and veteran Will Johnson and it doesn't look like teenage phenomAlphonso Davies will be available either for Sunday's game against French Guiana in CONCACAF Nations League qualifying play.

Arfield has been nursing a calf strain with Glasgow Rangers while Johnson is in the MLS concussion protocol after having to leave Orlando City's loss Saturday to Montreal.

Canada coach John Herdman says the 18-year-old Davies "felt something" while celebrating his first goal for Bayern Munich in Sunday's 6-0 rout of Mainz.

"After the game it flared up a little bit," Herdman said in an interview. "It's been enough for Bayern Munich to put [up] that level of caution and try and hold him back."

"We'll still wait on Alphonso," he added. "We're still gathering information. But at this stage he won't be released from his club until everything's clear on the [medical] steps that they have to take and we have to take … It could be a bit of a waiting game for a couple of days to get full confirmation but the prognosis wasn't good."

So is the door shut on Davies?

"Not yet but it could be pretty quickly," Herdman said.

"He's a good player so we want to make sure all the steps have been taken to make sure if he's going to be ruled out it's for the right reasons and we don't deny the people of B.C. that opportunity without us really pushing for all the details we need," he added.

The Vancouver game was slated to serve as a hero's return for Davies, especially in the wake of his weekend goal.

Davies, an attacking midfielder with nine caps for Canada, joined Bayern from the Vancouver Whitecaps in a then-MLS-record $ 22-million US transfer. The deal was consummated in July but Davies closed out the MLS season before joining Bayern in January.

Arfield came out of Rangers' March 12 loss to Aberdeen and did not feature in Saturday's tie with Kilmarnock. Rangers' next game is the March 31 Old Firm derby with Celtic.

As for the 32-year-old Johnson, the injury is especially unfortunate given the last of his 43 caps came in June 2017 and he was eager for the recall.

In the wake of the injuries, Herdman has called up Toronto FC midfielders Jay Chapman and Liam Fraser and Orlando defender Kamal Miller. It's the first senior call-up for Miller, a 21-year-old defender taken 27th overall in the 2019 SuperDraft.

Canada is ranked 79th in the world while French Guiana is unranked since it is not a member of FIFA.

At stake Sunday is a place in the top tier of the CONCACAF Nations League and a berth in the 2019 Gold Cup.

Canada stands third in the 34-team standings with a goals difference of plus-14. Curacao (plus-21) tops the table ahead of Haiti (plus-16). Cuba (plus-14, but has played two home games to Canada's one) is fourth, followed by Jamaica (plus-11) and Martinique (plus-6),

French Guiana (2-1-0) stands 12th. The four-game qualifying round sets the stage for a three-tier competition, complete with promotion and relegation, that kicks off in the fall of 2019 in the confederation covering North and Central America and the Caribbean.

The top six teams out of qualifying will join Mexico, Costa Rica, Panama, Honduras, the U.S., and Trinidad and Tobago in the top-tier CONCACAF Nations League A. Those six countries skipped qualifying by virtue of reaching the final round of CONCACAF World Cup qualifying.

Those six will also join the top 10 teams from Nations League qualifying at the 2019 CONCACAF Gold Cup, which increases to 16 teams from 12. That will motivate French Guiana, which has made the regional championship just once.

Canada defeated French Guiana 4-2 in their only previous meeting, at the 2017 Gold Cup. A 16-year-old Davies scored his first two international goals in the win.