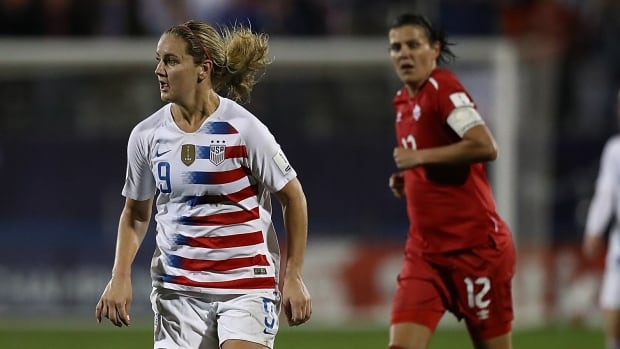 When, exactly, am I supposed to eat, sleep, shower, shave or take out the garbage?

I know the key to it all is organization. I must keep ahead of the curve and plan accordingly. Timing is everything. A strict daily regimen is required to achieve this ambitious goal – but I’m up for the challenge.

It’s all the fault of Canadian soccer.

I’m still on the Raptors bandwagon. Now they tell me the month-long FIFA Women’s World Cup is about to kick off in France and Canada is among the leading nations.

According to FIFA’s mathematicians, Team Canada is ranked fifth in the world. Not too shabby for a country that has twice returned from foreign shores with an Olympic medal in women’s soccer.

It proved in London (2012) and again in Rio (2016) it can deliver under pressure and is worthy of our support. Canada is tournament tested and ready to compete in its seventh Women’s World Cup.

So is Canada a contender or a pretender in France? That rather depends upon your expectations of this team. If you think Canada can climb the mountain and become world champion, I suspect you will be sorely disappointed.

There are simply too many obstacles in the way.

There is a reason Canada has not beaten the U.S. for nearly 20 years. I am not saying it cannot happen – upsets occur in all sports. Don’t forget the Americans, themselves, failed to medal in Rio. I am certain they haven’t.

Then there are the European powerhouses. Germany is the Olympic champion and arrives on French soil chasing a third World Cup title.

Much is expected of England. The success of the domestic women’s Super League has helped advance the cause of the women’s game. Lest we forget it was England that broke Canadian hearts in the 2015 quarter-finals in front of more than 50,000 in Vancouver.

Naturally, the host wants to be the star of its own show. France, with the benefit of home advantage, must start among the favourites, and its most successful club team, Lyon, not Paris, has been chosen the stage the final.

Canadians no strangers to host country

Kadeisha Buchanan knows all about Lyon. The formidable Canadian central defender has earned her living there for the last two years and only last month celebrated a UEFA Women’s Champions League victory.

Buchanan has been used sparingly in France but she is among the first names on Canada’s team sheet. Her physicality, agility and speed make her the backbone of the back four in front of number one goalie Stephanie Labbe.

Huitema represents the future. The 18 year old from Chilliwack, B.C., is the youngest member of the Canadian roster at the Women’s World Cup but has already demonstrated her ability to score goals as a senior international.

Every coach wants to blend youth with experience. No one has more experience than Christine Sinclair. The Canadian captain knows a nation looks to her each and every time her country takes the field. Sinclair quietly accepts the responsibility and leads by example.

At an age when many have already retired, Sinclair endures. She possesses an inexhaustible supply of motivation and is primed to rewrite soccer history in France. Three more goals will equal the all-time international scoring record held by American Abby Wambach. The fourth will put Sinclair in a class of her own.

Canada blanks Mexico 3-0 in friendly, Christine Sinclair records goal No. 181 of her career. 1:07

Sinclair will celebrate her 36th birthday two days after Canada’s opening pool game against Cameroon – a match Canada should win. It should also be too strong for New Zealand, leaving a potential group decider against the fast-improving Netherlands.

There is an argument that Canada would be better served by not winning its group. Finishing first in Group E would mean a likely Round of 16 tie against either England or 2015 runners-up Japan. If Canada was to finish 2nd in its group its next opponents might well be Sweden – well known adversaries – and perhaps a marginally easier path to the last eight.

The players, of course, will not be thinking like that. They are professional athletes for whom winning is everything. Seven straight victories wins the FIFA Women’s World Cup – yet not a single nation managed that in Canada four years ago.

The Americans won six, including the Final itself to hoist the trophy for a third time. Don’t be surprised if Team USA is, again, the last team standing on French soil.