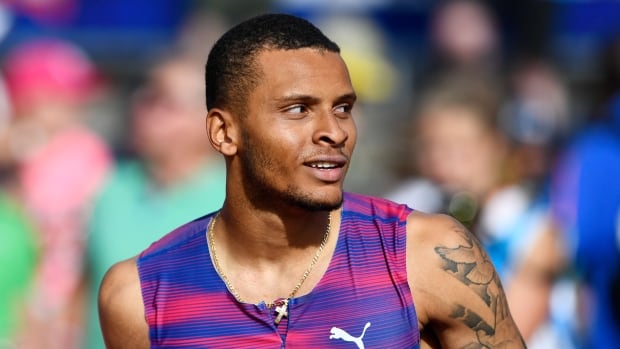 De Grasse, 24, ran a season-best time of 19.87 seconds to earn third place in the men’s 200 metres at the league finals on Friday in Brussels.

As rain began to fall in Belgium, American Noah Lyles continued making his case as the Tokyo Olympics gold medal favourite in the event with a victory at 19.74 seconds. Turkey’s Ramil Guliyev snagged second just one hundredth of a second ahead of De Grasse.

Noah Lyles added to his 100 metres win, with a victory in the men’s 200 metres Diamond League final in Brussels, while Andre De Grasse finished third with a season best time of 19.74 seconds. 5:27

De Grasse’s time is just six hundredths off of his personal best set at the 2016 Olympics in Rio de Janeiro.

Brown, meanwhile, was just 0.05 behind his personal best set earlier this season in Lausanne, Switzerland.

Both men will now turn their attention to the world track and field championships which run from Sept. 27 through Oct. 6 in Doha, Qatar. CBC Sports is the exclusive home of all live coverage from the event.

Andre De Grasse spoke after his 3rd place finish in the men’s 200m race at the IAAF Diamond League final in Brussels, Belgium. 1:27

After shattering her own 1,500 national mark last week by breaking the four-minute barrier, the 23-year-old lowered her 5,000 number by more than seven seconds to 14 minutes, 44.12 seconds.

DeBues-Stafford was one of two Canadians to run in both halves of the Diamond League finals. She’s now achieved a Canadian record in each one.

Canada’s Crystal Emmanuel also competed in both meets, but placed seventh in the women’s 100 at 11.38 seconds on Friday, well off both her personal and season bests. Great Britain’s Dina Asher-Smith won the race with a season-best 10.88.

Dina Asher-Smith runs to a season’s best 10.88 while Toronto’s Crystal Emmanuel finished 7th with a time of 11.38 at the Diamond League final in Brussels. 3:55

Pole vaulter Alysha Newman, another national record holder, sewed up third place in the event on Friday but failed to clear 4.83 metres, which would have broken the mark of 4.82 metres she set earlier this season.

The London, Ontario native clears 4.77m to hang on to the third spot in the women’s pole vault Diamond League final. 0:45

Canada’s lone winner on the day was Sage Watson, who took first place in women’s 400 hurdles at 55.58 seconds. While that wasn’t a Diamond League event, it bodes well for Watson that she was able to fend off several high-end competitors.

Sage Watson convincingly takes the women’s 400m hurdles with a time of 55.58 in Brussels. The Alberta native beat her nearest competitor by more than a second. 4:58

Watson should be considered a podium contender at worlds after this result.

Watch a replay of the Diamond League Finals on CBC’s weekly Road to the Olympic Games show on Saturday at 2 p.m. ET.