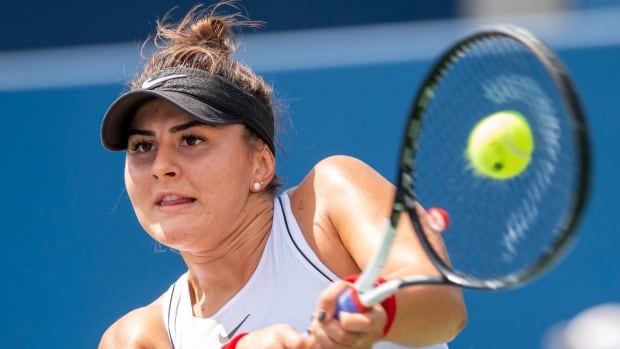 Bianca Andreescu advanced to the quarter-finals of the Rogers Cup on Thursday in Toronto, edging world No. 5 Kiki Bertens of the Netherlands 6-1, 6-7, 6-4 in a dramatic, rain-interrupted match on centre court.

The Mississauga, Ont., teen capitalized on her fourth match point when Bertens hit her second straight double fault to end the afternoon tilt, which was delayed one hour 11 minutes by rain.

Andreescu will face former world No. 1 Karolina Pliskova of the Czech Republic in the quarter-finals Friday.

She is the fifth Canadian woman to make it to the quarter-finals of the Rogers Cup since it became a hardcourt event in 1979, and the first to do it since Aleksandra Wozniak in 2012. Carling Bassett (1985), Helen Kelesi (1987) and Patricia Hy (1992) were the others.

Andreescu, who’s had all her matches stretched to three sets this tournament, was on fire early on. She earned a big break to go up 5-1 in the first set, screaming into the crowd after her winning point.

The Canadian started slowly in the second set, falling behind 0-3. But she saved four break points to tie it 3-all, then dug out of a second straight 0-40 hole to hold at 4-all. It was Bertens’s time for a comeback in the tiebreak though, rallying from a 5-2 deficit to take it 9-7.

Steady rain rolled into the area and suspended play with Andreescu up 40-15 in first game of the opening set. A light drizzle started up shortly after the court dried up, but the second delay was minimal and play resumed after a few minutes.

Andreescu had never played Bertens before Thursday. The Canadian entered the match with a 4-0 record against top-10 ranked opponents this year — including her Indian Wells final win over then-No. 8 Angelique Kerber in March for her first WTA title.

Andreescu, returning from a shoulder injury that limited her to three matches since May, had played nearly five hours of tennis over the first two days of the tournament. She needed three sets to defeat Daria Kasatkina on Wednesday night, and three against fellow Canadian Eugenie Bouchard in the first round Tuesday.

“Being off for that long and coming into the Rogers Cup and getting into the quarterfinals means so much to me,” the 19-year-old Andreescu said.

“And this time off actually helped me — I figured a lot of things out — and it’s showing on court.”

She looked to be out of the tournament on Wednesday — facing a 5-3 deficit in the third set of her late afternoon match against Kasatkina — but rallied by winning four straight games to advance to the third round.

Pliskova can reclaim the top spot on the WTA rankings with a solid run at the Premier 5 event this week.

A rising star celebrating his 19th birthday, Auger-Aliassime pushed ahead early, but was undone by 12 double faults and a series of mistakes at key times.

“For sure frustrated because it was a big occasion,” he said. “There was a lot of expectations, pressure, you name it.

“It’s tough to see it slip away, but there’s reason for that. It just means that I still have things to improve to win these type of matches and to deal better with these type of moments.”

Victorious in just six total outings prior to 2019, the world’s 21st-ranked player and last remaining Canadian in the men’s bracket has made three finals since February, but is still looking for his first title.

Khachanov, meanwhile, now turns his attention to the quarterfinals.

In front of a decidedly partisan gathering Thursday, Auger-Aliassime won a sloppy first set in gusty conditions that saw both players broken twice and commit a number of unforced errors.

Tied 7-7 in the tiebreak, Khachanov sent a shot into the net on serve and then fired another ball over the second deck and out of the venue in frustration after dropping two set points up 6-4, leading to boos.

Auger-Aliassime sealed the set on his next serve, much to the delight of the adoring crowd.

After three breaks apiece in the second set, Khachanov broke the 19-year-old Canadian for a fourth time to secure a 7-5 decision that evened the match on centre court.

Khachanov broke Auger-Aliassime again to go up 3-1 in the third set.

The hometown favourite battled back to make it 4-2 as fans chanted his name, but Khachanov held serve despite going down 0-30 in the final game to seal the match in two hours 50 minutes.

After the match, the crowd sang “Happy Birthday” to Auger-Aliassime, while a video featuring fellow pros also passing on their greetings played on the big screens.

Auger-Aliassime, who started the year ranked 108th, advanced to Thursday’s round of 16 after victories in all-Canadian matchups with Vancouver’s Vasek Pospisil and Milos Raonic of Thornhill, Ont.

Pospisil gave the teen all he could handle in the first round before Auger-Aliassime advanced following a third-set tiebreak at the $ 5.7-million US ATP Tour Masters 1000 series event.

Raonic, the top-ranked Canadian at No. 19, was then forced to retire from their second-round match with things tied at one set apiece because of a back injury on Wednesday night. Raonic, 28, also withdrew from a scheduled semifinal with Auger-Aliassime in Stuttgart in June.