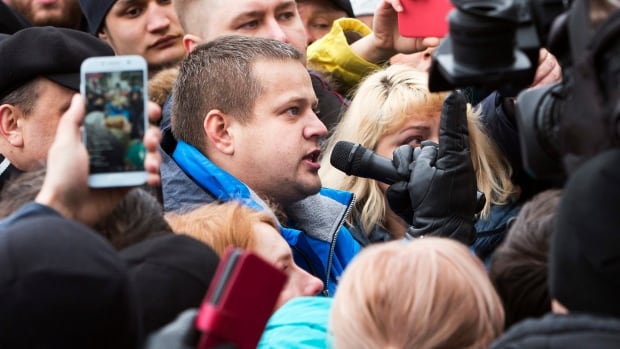 Distraught and angry, thousands of Russians took to the main square of a Siberian city Tuesday to confront local officials whom they blame for a shopping mall fire that killed at least 64 people, most of them children.

President Vladimir Putin, who also visited the city, blamed the deaths on “a criminal negligence, sloppiness,” as he laid flowers in tribute to the victims. He did not address the rally, which went on for at least six hours.

The blaze engulfed the Winter Cherry mall in Kemerovo on Sunday, the first weekend of the school recess, trapping dozens of parents and children inside. Witnesses reported that fire alarms were silent and many doors were locked. Some victims were children who died in a locked movie theatre.

Emergency Situations Minister Vladimir Puchkov said 58 bodies have been recovered and that the rescue workers are still searching for six more. Emergency officials told the Tass news agency that 41 of the victims were children.

The angry residents rallied for hours outside the regional government building in Kemerovo, with many taking the stage to accuse the authorities of hiding the real scale of the disaster.Crowds gather for the victims of a fire in a multi-story shopping center in the Siberian city of Kemerovo, about 3,000 kilometres east of Moscow, on Tuesday. Officials say that the fire escapes were blocked and a PA system was turned off during the fire that killed over 50 people. (Sergei Gavrilenko/Associated Press)

One protester, Igor Vostrikov, addressed deputy governor Sergei Tsivilyov, saying that families of the victims think the death toll is much higher than stated because the entire movie theatre burned down in the city 3,000 kilometres east of Moscow.

“We’re not calling for blood,” he said at the rally. “The children are dead, you can’t give them back. We need justice.”

When the deputy governor dismissed the protester’s call as “a PR stunt,” Vostrikov retorted that he has lost his wife, sister and three daughters, aged two, five and seven, in the fire.

“They died because they were locked in a movie theatre,” Vostrikov said in an interview on the Dozhd television station. “They were calling from there, asking for help: ‘We’re locked in, we’re suffocating.’ No one helped because when the blaze broke out, everyone ran away.”

The impromptu protest underscored the residents’ frustration with the official response to the tragedy. The local governor has still not visited the site of the fire or met with the relatives, and Putin did not address the nation or immediately declare a period of mourning.

In an apparent reaction to public pressure, the Kremlin on Tuesday afternoon issued a statement, declaring Wednesday a day of mourning.

Putin flew to Kemerovo earlier Tuesday and visited the makeshift memorial to the victims outside the shopping mall. The footage released by his press office showed the president laying flowers on a deserted plaza with his security detail guarding the perimeter.Russian President Vladimir Putin visits a shrine to the victims in Kemerovo built up since Sunday’s fire. (Alexei Druzhinin/Kremlin via Reuters)

“How could this possibly happen? What’s the reason?” Putin said at a meeting with the task force dealing with the fire.

Kemerovo Governor Aman Tuleyev, meeting with Putin, blamed “the opposition” and “local busybodies” for fomenting the protests, and claimed that families of the victims were not at the rally.

Russian state television on Tuesday showed footage from inside the charred movie theatre where the roof entirely collapsed. Investigators said emergency exits were blocked and a security guard turned off the public announcement system when he received a call about the blaze.

Alexander Bastrykin, chief of the Investigative Committee, told Putin on Tuesday that the fire alarm had not been operational for two weeks and that the security guard was detained but they still had no “reasonable” explanation for his actions.

The investigators announced later Tuesday that they are asking the court to arrest five suspects but did not say who those people were.A mall fire in the city of Kemerovo, Russia, has killed dozens of people, including many children. An investigation into the fire has been launched — witness reports say that the mall’s fire alarms did not sound and that many of the fire exits were blocked3:08

Kemerovo’s mayor asked the rally to nominate representatives to visit the morgue to check for themselves that the authorities were not hiding the truth about the deaths. A dozen protesters did so, and had a word in the lobby with Putin, who asked the protesters “not to doubt” that authorities will conduct a transparent probe.

“Those who need to answer for that, everyone will,” Putin told residents when pressed to fire Tuleyev.

Another deputy governor, Vladimir Chernov, told the rally in Kemerovo that unconfirmed reports of hundreds of deaths at the mall were untrue and said he was ready to resign if people want him to.

“Resign, resign!” the crowd chanted back.