Winnipeg skip Jennifer Jones has won everything there is to win in the sport of curling, including five Canadian championships, a world championship and Olympic gold.

If there’s a curling bonspiel with Jones in it, she’s expected to win. So when she lost the Manitoba playdowns last year to miss the Scotties, after 12 previous appearances, players and fans across Canada were shocked.

Jones, though, might be the only one who wasn’t. In fact, she says it might have been the best thing that could have happened to her team in the lead up to another Olympic curling trials, running Dec. 2-10 in Ottawa. The men’s and women’s winners will represent Canada in Pyeongchang, South Korea, in February.

“I don’t know if it reignited anything because I believe we always have that fierce competitive fire,” Jones said. “It just allowed us an opportunity to have time during the season which we never have.”

Instead of panicking, Jones and her team of Kaitlyn Lawes, Jill Officer and Dawn McEwen packed their bags and headed to the Caribbean for a team holiday. At a time of year they’d normally be on the ice, they were soaking up the sun on the beach.

“It was the first time we’ve ever done that,” Jones said. “We really regrouped and started our prep for this year as soon as provincials were over. In a way, we felt we really got a head start on this upcoming year and believe that we’re in a good spot.”

They were relaxing, but they were also going over what they needed to do to get back to the top of their game, a process that started quite a while ago.

“I think we’ve been kind of mapping it out for the last four years, to what you want that to look like and how you want to be able to try to perform to your best that week.”

And so far, it’s gone according to plan.

Jones’s team has won the last two Grand Slam events heading into this weekend’s Roar of the Rings.

She’ll have some serious competition there, including three-time Canadian champion and current world champion Rachel Homan. But at this point in her career, nothing really seems to faze Jones. 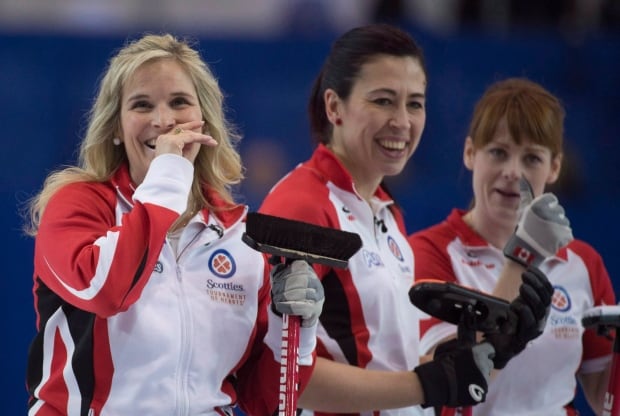 Jones, along with teammates Jill Officer, centre, Dawn McEwen, right and Kaitlyn Lawes (not pictured) took a sunny regroup together earlier this year after missing the Scotties. (Jonathan Hayward/Canadian Press)

“I think every team there believes they have that winning formula right now and we hope that we do as well,” she said. “We’ve done it before so hopefully that is one of the small little advantages that we can take into this Olympic trials.”

There was a time when Jones was consumed by curling, but now she’s the mother two young daughters, five-year-old Isabella and one-year-old Skyla. It’s providing her a different perspective not only on the game, but on life as well.

“All I want them to know is that they can achieve anything and they can dream anything and it’s the path along the way that really makes life worth living,” she said.

Late last year, Jones, with husband Brent Laing and the girls, moved to Horseshoe Valley near Barrie, Ont. Laing is no stranger to elite curling. He’s won three Canadian and world titles over the years. It’s a curling household.

And should Jones and her team fail to qualify getting to the Olympics, Jones has a second opportunity by virtue of playing mixed doubles with Laing. The two could potentially compete at the Games together .

“I don’t find it challenging to play with my husband because we have always have talked curling. We’ve practised together all the time too,” Jones said. “I love mixed doubles. It’s such a fast moving, aggressive style of game. And then I had the opportunity to play with the love of my life.”

Jones wants her love of curling and excellence in the sport to prove to her daughters they can be anything they want in to be in life. She’s constantly reminding of them of this message. And so when her birthday rolled around this summer, she received a surprise she could have never imagined. 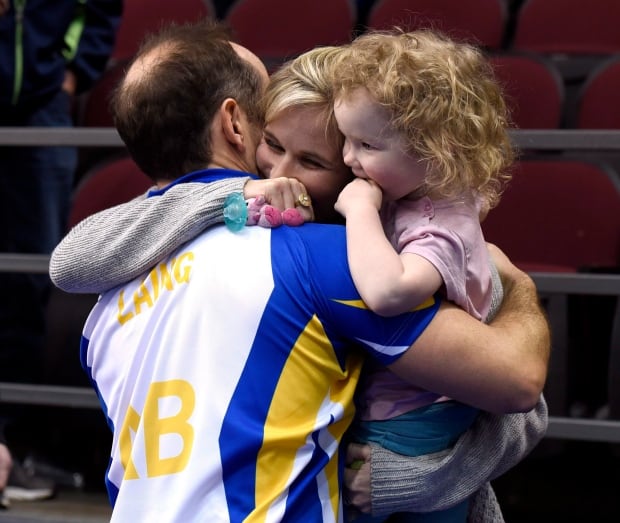 Jones shares a hug with husband Brent Laing, and daughter Isabella. Laing is also a curler and the pair compete in mixed doubles. (Justin Tang/Canadian Press)

And that’s what’s driving Jones to get back to the Olympics now. She hopes to also be a role model for many more women in sport.

“Hopefully I can inspire some young people to try and chase their dreams whatever it may be.”

Should Jones win the trials in Ottawa to earn the right to represent Canada in February, she’ll become the first skip in this country’s curling history to lead a women’s team back to the Olympics. In 2014, Jones went undefeated to capture gold for Canada in Sochi.

“It’s really hard to put into words what it’s like to win an Olympic gold medal and the pride that you feel,” she said.

When Jones reflects back on her career, she gets lost for words when trying to describe how this all came to be. She says she was a shy, young girl from Winnipeg who wanted to be the best at everything she did. She fell in love with curling and has carved out a career playing the sport.

“I had dreams and goals but to have it actually come to fruition and to do it with my amazing teammates who are just the greatest people is remarkable,” she said. “If you can stand on top of an Olympic podium at any moment in time it is a life-changing moment.”

And she wants to do it again, for her teammates, for her husband, for her daughters.