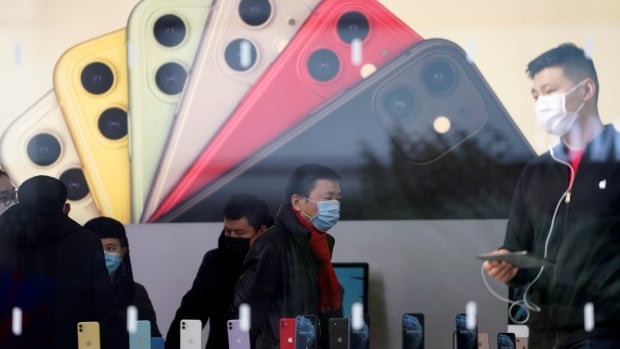 Apple Inc. said on Monday it will not meet its revenue guidance for the March quarter due to the coronavirus outbreak affecting production and demand in China.

The Cupertino, Calif.-based company said that although its productions facilities in China have reopened, they are ramping up slower than expected.

The company had forecast $ 63 billion to $ 67 billion US in revenue for the quarter ending in March, ahead of estimates of $ 62.4 billion.

The company said it would provide more information during its next earnings call in April.

Apple also said store restrictions due to coronavirus precautions had affected its sales in China, with most retail stores either closed or operating at reduced hours.

“We are gradually reopening our retail stores and will continue to do so as steadily and safely as we can,” the company said.

The disruptions follow a strong December quarter for iPhone sales, which were up for the first time in a year.

Analysts have estimated that the virus may slash demand for smartphones by half in the first quarter in China, the world’s biggest market for smartphones.

“While we have discussed a negative iPhone impact from the coronavirus over the past few weeks, the magnitude of this impact to miss its revenue guidance midway through February is clearly worse than feared,” Wedbush analyst Daniel Ives wrote in a note.

WATCH | What we know about the coronavirus:

Information about the coronavirus outbreak is spreading fast, but what do we actually know about the illness? CBC News medical contributor and family physician Dr. Peter Lin breaks down the facts about what it is, where it came from, how it spreads and what you can do to protect yourself. 5:10

Apple’s stock is expected to face a knee-jerk reaction on Tuesday, when Wall Street reopens after the Presidents Day holiday, Ives said.

Wedbush said it remained optimistic that Apple would be able to recover from the coronavirus setback.

Remaining bullish for the longer term

“While trying to gauge the impact of the iPhone miss and potential bounce-back in the June quarter will be front and centre for the Street, we remain bullish on Apple for the longer term,” Ives said.

The outbreak is expected to intensify pressure on China’s economy, with multiple companies struggling to restart production after an extended Chinese New Year holiday.

Fiat Chrysler, Hyundai Motor Co. and General Motors Co. have said their auto production lines were, or could be, hit by Chinese factories that are slow to restart because of the virus.