The artist who left an Ottawa woman with vision loss in one eye after a tattoo injection went wrong is defending his actions, saying he didn’t make any mistakes during the procedure.

Eric Brown tattooed the white of Catt Gallinger’s right eye purple in an Arnprior, Ont., studio after-hours on the night of Sept. 5. Gallinger told CBC News that she didn’t sign a waiver, but trusted Brown, who she was dating at the time.

“He had a portfolio and said he had done it before,” she said.

The tattoo, called scleral pigmentation, is made by lancing a small needle into the top layer of the eye and injecting diluted ink.

Within hours of the procedure, Gallinger said she was in pain as the ink leaked from her eye. The next morning, it was swollen shut. 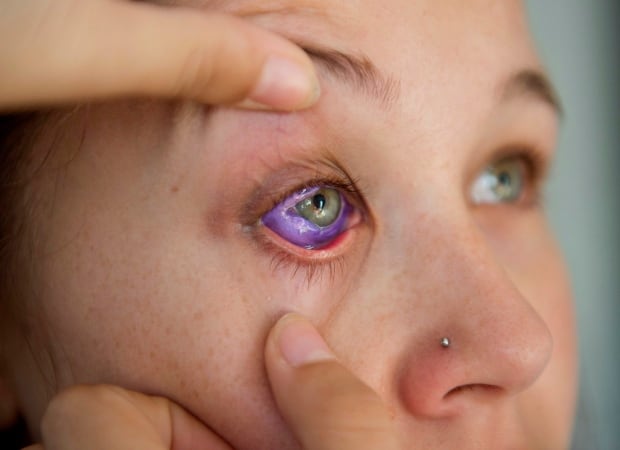 Gallinger, who had an ink injection in her eyeball, shows the amount of swelling in her eye, at home in Ottawa on Friday, Sept. 29. Medical professionals and body artists say the practice of tattooing the eyeball is on the rise despite its many risks. (Justin Tang/Canadian Press)

She went to the emergency room, but left after the doctor told her he didn’t know what was wrong, she said.

After two more consultations with other doctors, Gallinger received antibiotics to reduce the swelling. However, when she was finally able to open her eye, she said she couldn’t see properly.

Over the last few weeks her vision has improved to blurry sight and she’s now waiting for surgery — the globs of hardening ink still mottling her eye.

“I’m playing a waiting game,” she said. “If the ink dries in my eye it can create a lot more severe damage.”

Doctors have scheduled a consultation for next week. If scans determine the ink has solidified on her retina, Gallinger said doctors told her they’ll have to remove the eye.

‘It wasn’t my fault’

After researching the injection procedure over the past few weeks, Gallinger said she believes Brown had done it incorrectly.

The needle was too large, he didn’t dilute the ink, and he hadn’t waited an appropriate amount of time before the second portion of the injection, she said.

But Brown is defending his craft, saying she didn’t take the proper steps to care for her eye after the tattoo. 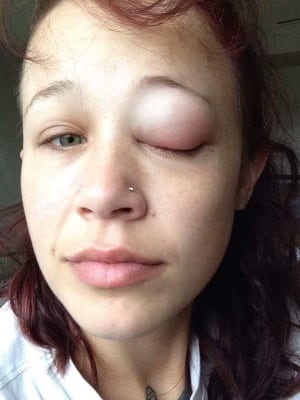 This mirrored image shows Gallinger’s right eye had swollen shut. She said when the swelling went down, her vision was blurred. (Catt Gallinger/Supplied)

“I wholeheartedly believe it wasn’t my fault,” Brown said in an email to CBC Friday. “I told her she needed to get more eye drops that day … She was fine, but neglected to get eye drops.”

When he got his own scleral tattoo, Brown said he had a similar reaction, but eye drops helped it go away within a few weeks. Of the over 20 eye tattoos he’s done, Brown said this is the second to go wrong.

The first botched tattoo failed because cat dander became lodged in the man’s eye, Brown said. He maintains the failed injections were the fault of the clients.

“My procedure was clean, only two mere injections, with an ink that has been tested, that we know is safe to use in eyes,” he said. “I told [Gallinger] the risks or what kind of swelling she could expect and she went through with it anyway.”

Doctors say the treatment is highly experimental, but Setareh Ziai, an Ottawa ophthalmologist, said an increasing number of people are doing it.

The trend has only been around for a decade, she said, and no research has been done on the long-term effects of the injection.

Ziai cautions that Gallinger’s symptoms are an extreme example of the risks of scleral pigmentation.

‘I will never recommend anyone to ever do this. It’s not worth the risk’– Catt Gallinger

Gallinger is echoing that warning.

“I will never recommend anyone to ever do this. It’s not worth the risk,” she said. “I wish I had done a lot more research … It was someone I thought I could trust. That was my mistake.”

Scleral tattoos are not legal in Canadian tattoo shops, but Gallinger said she’s never heard of anyone being prosecuted for doing the procedure.