At least eight people were killed when a magnitude 6.1 earthquake struck the Philippines’ main island of Luzon Monday and officials feared dozens could be trapped in the rubble of a collapsed commercial building.

The quake hit 60 kilometres northwest of the capital, Manila, disrupting air, rail and road transport and causing some damage to buildings and infrastructure.

The province of Pampanga was worst hit. Eight people were killed and about 20 injured, provincial governor Lilia Pineda said by telephone, citing information from disaster officials.

Rescuers were using heavy duty equipment and search dogs to try to reach people trapped after a four-storey building went down, crushing the ground-floor supermarket, she said. 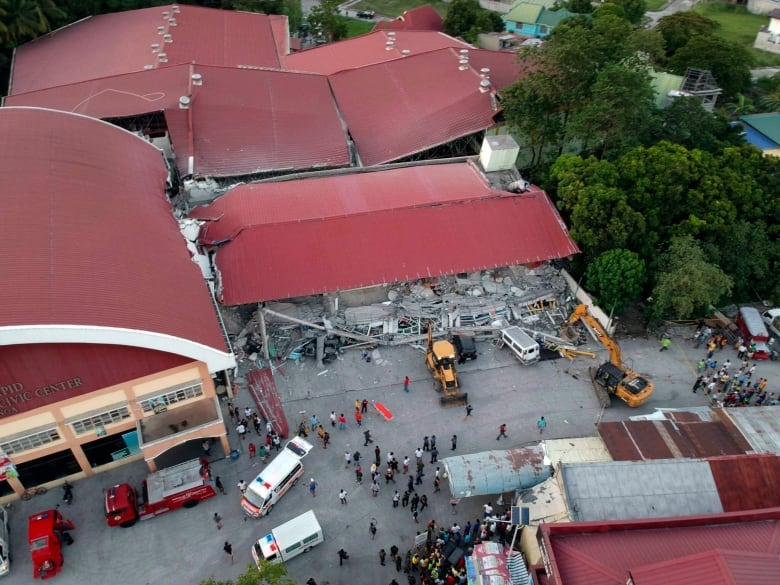 “They can be heard crying in pain,” she said of those trapped. “It won’t be easy to rescue them.”

The quake was initially reported as being of 6.3 magnitude and later revised down to 6.1 magnitude, the U.S. Geological Survey and Philippines seismology authorities said.

The Philippines is prone to natural disasters, located on the seismically active Pacific “Ring of Fire,” a horse-shoe shaped band of volcanoes and fault lines that circles the edges of the Pacific Ocean. It is also hit by an average 20 typhoons a year, bringing heavy rains that trigger deadly landslides. 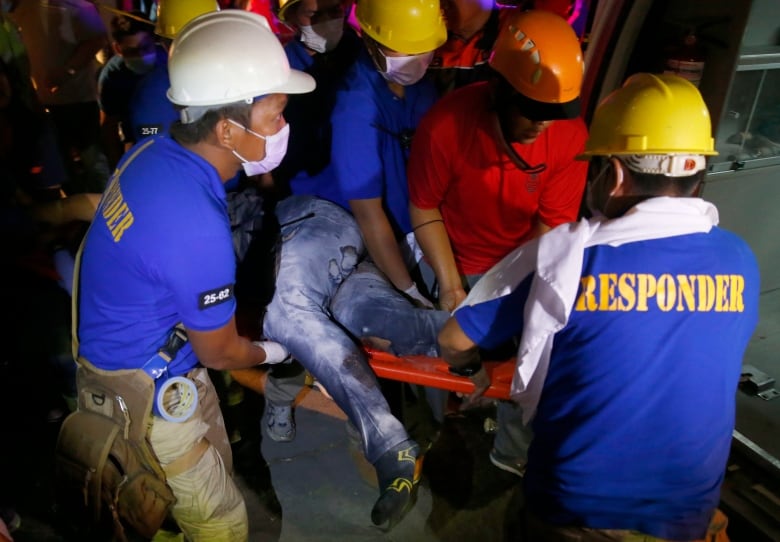 Rescuers carry a victim pulled from a collapsed building to a waiting ambulance. (Bullit Marquez/Associated Press)

Mayor Condralito Dela Cruz of Porac town, Pampanga, said rescuers pulled two survivors from the collapsed building, where other trapped people could be heard screaming for help as rescuers struggled to save them.

An Associated Press photographer saw a third survivor and the body of a woman being extricated by rescuers from the rubble late Monday. The rescue work picked up pace after four cranes arrived at the scene, where Red Cross volunteers, police and soldiers helped out.

A child was one of two dead people pulled out from the rubble earlier in the day. The leg of one of the two survivors had to be amputated to extricate him, Porac Councillor Maynard Lapid said, adding that at least eight trapped people could be heard pleading for help at one point.

“One of the trapped was seen waving for help from behind a glass window but we cannot see him now,” Lapid told The Associated Press by telephone. 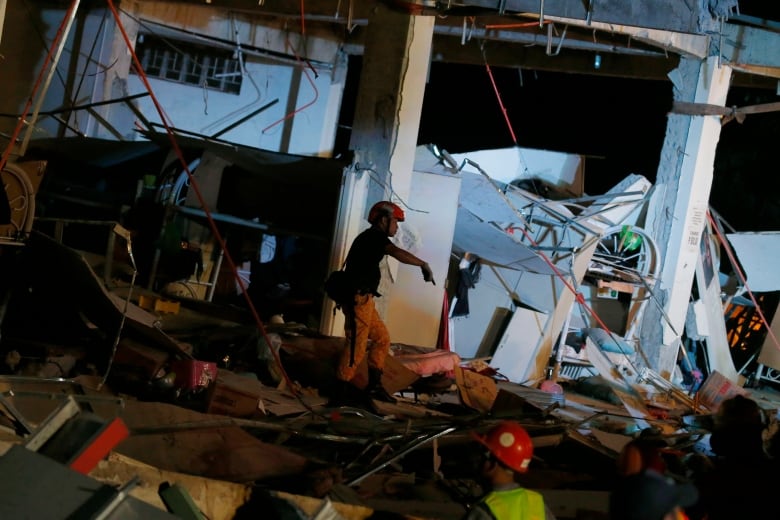 A rescuer searches for survivors in the rubble of a commercial building. (Bullit Marquez/Associated Press)

At least 31 people remained unaccounted for at the collapsed Chuzon supermarket, based on a rough accounting of its employees, although some could have been elsewhere when the earthquake struck, Lapid said.

Pampanga’s international airport at Clark, a former U.S. military base, was closed and scores of flights were cancelled after damage to parts of the facility including check-in areas.

Rescue teams in Manila were preparing to reinforce efforts to reach people trapped in Pampanga. The government urged people to be calm as rumours of greater death and destruction gained traction online.

“We urge them to refrain from spreading disinformation in social media that may cause undue alarm, panic and stress,” said presidential spokesperson Salvador Panelo. 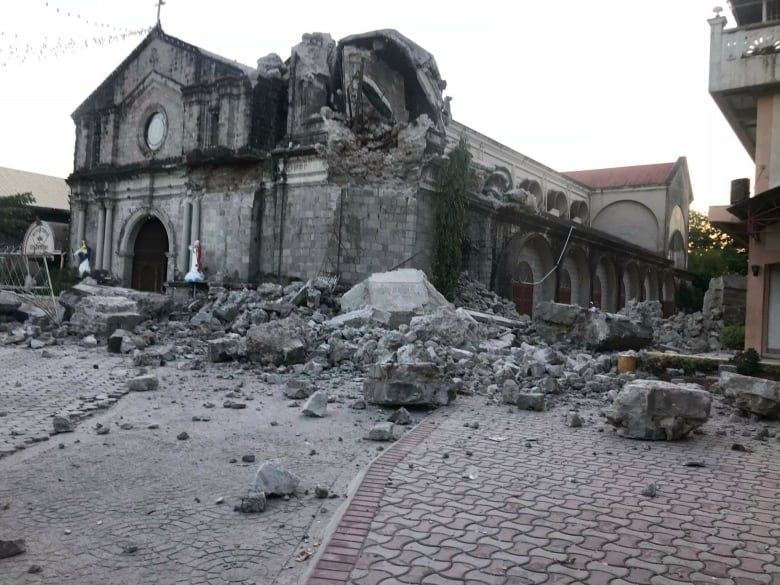 The St. Catherine church in Porac town was damaged in the quake. (Vhic Y Naluz/Associated Press)

In Manila, the quake, which happened shortly after 5 p.m. local time, caused tall buildings to sway for several minutes in the main business districts.

“We got nervous, we got dizzy. I ran downstairs with three kids,” said Arlene Puno, a domestic helper in a high-rise apartment in the Makati financial centre.

Elevated rail services were halted and workers were evacuated from offices and condominiums, sending a flood of people onto sidewalks and into bus queues and adding more chaos to roads that are among the world’s most congested.

Mark Genesis Samodio, 23, a maintenance worker at a Makati condominium in the capital, said the quake’s impact was unusual, even for a city that has grown used to them.

“I was sitting down, then it shook so strong I thought I was being rocked in a cradle,” he said.