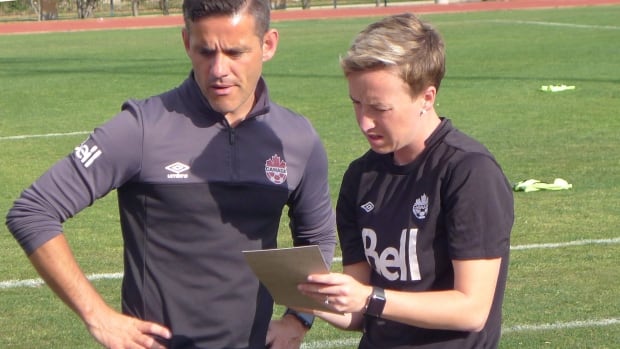 Bev Priestman, who spent five years developing Canada’s next generation of soccer stars, is returning to take charge of the senior women’s program as it chases a third consecutive Olympic medal next summer in Tokyo.

Priestman succeeds Kenneth Heiner-Møller, who announced in July he was stepping down to rejoin the Danish Football Association as head of coach education.

With Priestman’s hire, Canada Soccer opted for a coach with strong ties to the national program. The women’s team is ranked No. 8 in the world.

“I’m extremely privileged, excited and honoured to lead a team who have a rich history in the women’s game. It definitely feels like I’m coming home,” Priestman said on virtual call with reporters on Wednesday.

The 34-year-old native of Consett, England, spent five years serving as director of Canada’s EXCEL developmental program as well as head coach of the women’s under-17 and under-20 teams. She also served as an assistant with John Herdman at the 2015 FIFA Women’s World Cup and the 2016 Rio Olympics, where the team won its second straight Olympic bronze medal.

Since leaving Canada in August 2018, Priestman has been the head coach of England’s under-18 and under-17 national teams. She was an assistant on Phil Neville’s coaching staff at the 2019 FIFA Women’s World Cup, where the Lionesses finished fourth.

She was thought to be in line to succeed Lionesses’ head coach Phil Neville in 2021, but England recently gave that job to Netherlands boss Sarina Wiegman.

Priestman, who won the job after a global search and a thorough three-round interview process, officially takes the Canadian reins Nov. 1. And though she only has nine months to prepare for the postponed Tokyo Olympics, she said the objective for the team is clear.

“We definitely need to change the colour of the medal. Two bronze is unbelievable, it’s a fantastic achievement and credit to John, the staff and the players that achieved that,” she said. “I think to keep moving forward, to get the group of players out of bed every day, is to aim higher than that.”

‘I understand the landscape’

Over the next four years, Priestman will lead the club through two Olympics and the FIFA World Cup in 2023 in Australia and New Zealand. Her familiarity with Canadian system and its players both current and in the pipeline will prove valuable, as well as her relationship with the team’s staff.

As for who her assistants might be, she said she has a great relationship with the current staff and hopes to add to it in order to get the best out of herself and the team.

Priestman has a UEFA A Diploma and she’s currently working toward a UEFA Pro License, the highest coaching certification in European football. She may be relatively young for a head coach of top 10 football nation – younger than captain Christine Sinclair, as Canadian Press journalist Neil Davidson astutely pointed out – but Priestman’s resume reads as a pathway of how to get to a No. 1 job.

A bachelor’s degree in science and football from Liverpool John Moores University, an apprenticeship at Everton, four and half years working in development with New Zealand Football, the move to Canada and finally to football-mad England.

The Canadian team hasn’t been together since March 2019 because of the COVID-19 pandemic, but most of the players are staying sharp by playing in professional environments whether it be in the recent National Women’s Soccer League’s Fall Series, the FA Women’s Super League, France’s Division 1 Feminine or with NCAA schools.

Priestman said with the reality of the pandemic, they don’t know when the team can get together again, but you have to find ways to adapt.

“It’s always difficult, you don’t get a connection over a computer,” she said. “There’s definitely going to be strategies around that remote connection, around seeing their games in their domestic environments and giving feedback. That’s going to be crucial.”