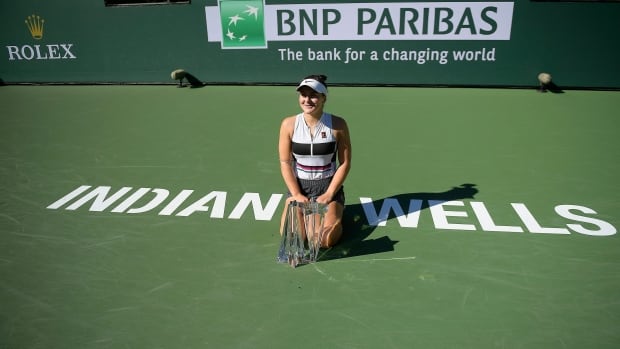 Years from now, it may be a footnote in the long, successful tennis career of Bianca Andreescu.

But for now it is part of the origin story of Canada's newest, emerging superstar.

Playing in her first career final against the established Angelique Kerber, Andreescu called for her coach during a break in the gruelling and decisive third set.

"My feet are burning. I can barely move out there," she told her coach, Sylvain Bruneau.

Bruneau reminded Andreescu of her mental and physical toughness, imploring her to push through.

"I want this so bad," she told her coach.

Andreescu's 3rd set conversation with coach Sylvain Bruneau was the turning point in her match as she went on to break the next game and eventually win her 1st career WTA title. 1:07

She then returned the court and surged toward her historic victory, besting Kerber in the final of the prestigious BNP Paribas Open 6-4, 3-6, 6-4 at Indian Wells, Calif.

Afterwards, she said the third-set meeting with her coach gave her chills.

"That moment was everything to me. At that point I was like mind over matter, that's what helped me win."

"That was a memorable line I will never forget," Downey said. "It's an example that will be repeated by coaches around the world when they're trying to instill fight in their players. This young kid has fight."

Her mental toughness combined with her skill has Downey and others in the tennis world predicting big things.

"She's got game. She's got what we call a multi-core game," Downey says. "You know she can do lobs. She can hit the ball hard. She's got a great serve.

Martina Navratilova, one of the greatest female players of all time, told BT Sport: "Every time we thought this is it, she doesn't have the game or she doesn't have the belief, the legs, she just kept proving us wrong. It was a coming-of-age tournament. This one is here to stay. I'm looking forward to seeing her develop into an even better tennis player."

Andreescu's win marks the the first time a wild card (a player who doesn't qualify but is invited by sponsors or tournament organizers) has won this tournament.

"I was actually really dizzy in the locker room because there were so many thoughts and emotions going through my body," she said. "It has been a crazy ride, truly a Cinderella story."

Wild cards don't win tournaments. They are just happy to be invited.

"Hopefully this moment can be a great inspiration for many young athletes because, like I always say, if you believe in yourself anything is possible," Andreescu said.

What's most refreshing about this 18-year-old from Mississauga, Ont., is she can't seem to comprehend her quick rise in the tennis world.

The 18-year-old from Mississauga stunned the tennis world as she upset world No. 8 Angelique Kerber 6-4, 3-6, 6-4, to win the BNP Paribas Open, becoming the youngest player to win the tournament since Serena Williams in 1999. 2:19

Her emotions after her victory and during a lengthy post-match news conference appeared genuine and devoid of familiar clichés. Andreescu is bringing Canadians along in real time as she plunges head first into stardom.

"I've watched all of these players play on television so many times," she said, shaking her head. "It's surreal to be able to play them in front of huge crowds at such a prestigious tournament."

She couldn't seem to believe where she had been and where she was now.

"A year ago during this period I had been struggling a lot with my body and my tennis, so it's crazy what a year can do. I was playing $ 25,000 challenger matches in Japan and now I am the effing (can I say that?) champion of Indian Wells. It's crazy. Crazy. That's the word of the tournament for me."

Stage set for a long career?

Other Canadian women have reached the upper echelons on the court. Staying there is another story.

In the 1980s, Carling Bassett-Seguso was the world No. 8 but never won a Grand Slam title. In the late 1980s, Helen Kelesi peaked at 13th. More recently, Eugenie Bouchard reached No. 5 in 2014, the highest ever for a Canadian player. But Bouchard has struggled in recent years and currently sits 80th in the world.

Downey believes Andreescu is different. He believes the on-court courage she displayed over the weekend will be a chapter in a long, successful career.

"There is a very good chance we're going to see a Top-10 player walk on centre court at the Rogers Cup [in August]," Downey said.