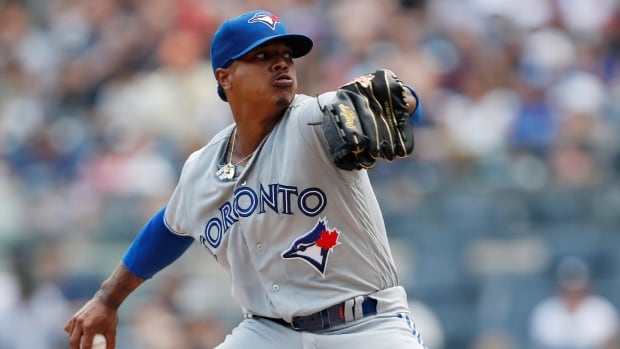 News of the deal surfaced shortly after the Blue Jays were defeated by the Tampa Bay Rays 10-9 at Rogers Centre on Sunday.

The Mets are reportedly sending pitching prospects to Toronto.

The Blue Jays would not confirm the trade, but did say Stroman wouldn’t be accompanying the team on its charter flight to Kansas City.

Stroman left the Blue Jays clubhouse post-game with a unknown companion in a hurry, headed for the underground parking garage. He didn’t speak to media and declined comment.

Stroman, 28, has spent his entire career with the Blue Jays and was named to the American League all-star team this season.

Source: The Blue Jays will be receiving pitching prospects from the Mets in the Marcus Stroman deal.

On <a href=”https://twitter.com/hashtag/BlueJays?src=hash&amp;ref_src=twsrc%5Etfw”>#BlueJays</a>’ return for Stroman: Triple A RHP Anthony Kay was <a href=”https://twitter.com/hashtag/Mets?src=hash&amp;ref_src=twsrc%5Etfw”>#Mets</a>’ first-round pick out of UConn in 2016. Class A RHP Simeon Woods Richardson was their second rounder out of Kempner (Tx.) H.S. in ‘18.

Trade speculation has been swirling all season and when the Blue Jays made a visit to Yankee Stadium in June, Stroman spoke of being “built for the bright lights” of New York.”

In a corresponding move, the Blue Jays have reportedly called up Bo Bichette from triple-A Buffalo.