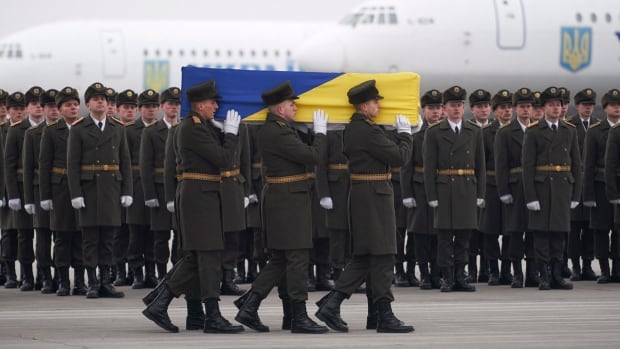 The bodies of the 11 Ukrainians who died when Iranian missiles shot down a passenger plane have arrived in Ukraine for a farewell ceremony.

They were among the 176 people killed in the Jan. 8 catastrophe, when a Ukrainian Airlines plane heading to Kyiv was brought down shortly after takeoff from Tehran. Iran acknowledged three days later that the plane was mistakenly hit by an anti-aircraft missile.

On Sunday, the bodies were brought to Kyiv’s Boryspil Airport aboard a Ukrainian air force plane. An honour guard solemnly carried the coffins into the airport terminal, where a farewell observance is to last until the evening.

The victims also included 57 Canadian citizens, 17 people from Sweden, four Afghans and four British citizens. Most of those killed were Iranians.

The five nations with citizens who were on board the plane have demanded Iran accept full responsibility and pay compensation to the victims’ families.

Canadian Foreign Affairs Minister François-Philippe Champagne met with his Iranian counterpart on Friday in Oman to discuss the investigation.

“It was a necessary step, to stand up for the families, to get accountability, to make sure that we will progress our discussion with respect to identification of the remains, repatriation of bodies, making sure that we start discussions on compensation for the families and making sure that there will be a transparent and open investigation, a full investigation of what happened,” Champagne told reporters Sunday in Winnipeg, where he is attending a cabinet retreat.

Champagne said he told Foreign Minister Mohammad Javad Zarif that the International Co-ordination and Response Group for the victims of Flight PS752 wants the plane’s black boxes to be “sent quickly, either to Ukraine or to France.”

Two investigators with the Transportation Safety Board of Canada (TSB) spent six days in Tehran and left Iran early Sunday.

Black boxes could still be in Iran

During their time in Tehran, they visited the crash site and examined the wreckage, which is secured in a separate location.

“It is our understanding that the flight data recorder and the cockpit voice recorder — often referred to as ‘black boxes’ — are still in Iran,” the TSB said in a statement issued on Sunday.

This week, the TSB investigators will travel to Ukraine to meet with the National Bureau of Air Accidents Investigation of Ukraine (NBAAI).

“There are still no firm plans as to when and where the aircraft recorders will be downloaded and analyzed,” the TSB said.

“The TSB will deploy a second team of investigators who specialize in aircraft recorder download and analysis once it is clear when and where that work will be done,” the TSB statement said.