A charter plane carrying 143 people and travelling from Cuba to north Florida ended up in a river at the end of a runway Friday night, though no critical injuries or deaths were reported, officials said.

The Jacksonville Sheriff’s Office posted on Twitter that a marine unit responded to assist. The plane was in shallow water and not submerged. Everyone on the plane was alive and accounted for, the agency posted, with 21 adults transported to local hospitals in good condition.

A photo posted by deputies shows a Miami Air International logo on the plane. The company didn’t immediately respond to messages from The Associated Press.

Capt. Michael Connor, the commanding officer of NAS Jacksonville, said during a news conference that passengers were a mix of civilian and military personnel. Some were staying in the area, while others were set to fly on to other parts of the country. 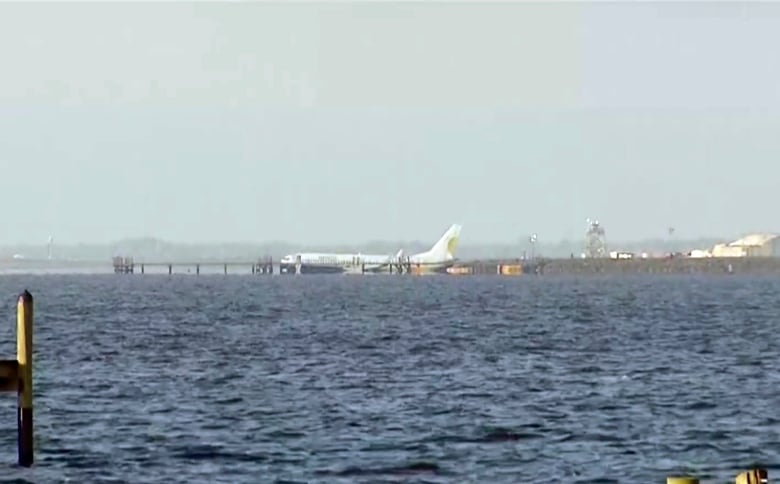 No one died or was critically injured among the 136 passengers and seven aircrew on the plane. (APTN/Associated Press)

While the crash certainly wasn’t ideal, Connor acknowledged that it could have been much worse.

“I think it is a miracle,” Connor said. “We could be talking about a different story this evening.”

A passenger who was on the flight described to CNN what happened after the plane had a “really hard landing.”

“We couldn’t tell where we were, whether it was a river or an ocean,” Cheryl Bormann told CNN. “There was rain coming down. There was lightning and thunder. And we stood on that wing for a significant period of time. The rescue folks came. Eventually someone inflated a life raft that had been on the plane and we began climbing into it. Everybody was helping everybody.”

It wasn’t known how long it would take to remove the plane from the river, but Connor said the landing gear appeared to be resting on the river bed, making it unlikely for the aircraft to float away. He said crews began working to contain any jet fuel leaks almost immediately after securing the passengers’ safety.

Liz Torres told the Florida Times-Union that she heard what sounded like a gunshot Friday night from her home in Orange Park, about eight kilometres south of NAS Jacksonville. She then drove down to a Target parking lot where police and firefighters were staging to find out more. 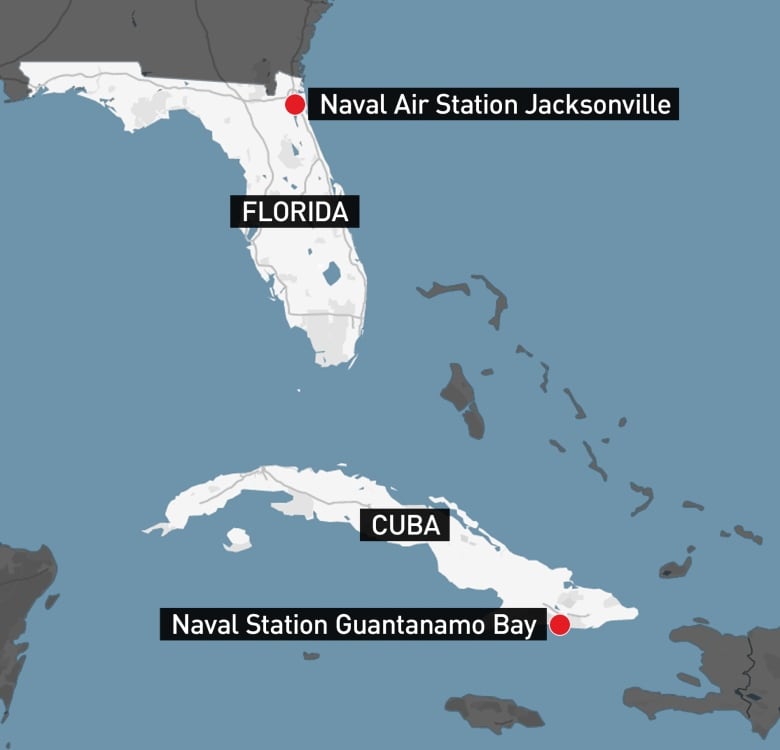 A Boeing 737 plane arriving from Guantanamo Bay in Cuba went off the Naval Air Station Jacksonville runway in Florida and into the St. Johns River on Friday night. (CBC)

The Jacksonville Fire and Rescue Department posted on Twitter that approximately 90 personnel responded to the scene, adding that the department’s special operations team had trained with marine units for a similar incident earlier Friday.

Navy security and emergency response personnel were on the scene and monitoring the situation, the Navy release said. Family members who were expecting the arrival of passengers were instructed to stand by.

Officials did not immediately say what caused the plane to leave the runway. Boeing said in a tweet Friday night that it was investigating: “We are aware of an incident in Jacksonville, Fla., and are gathering information.”

Connor said National Transportation Safety Board investigators were already on their way.