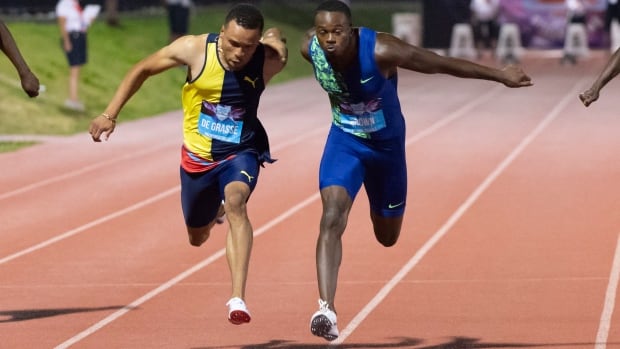 And in a thrilling 100-metre final, that took officials peering at a photo finish a full five minutes to decide, he did.

Brown captured his second consecutive 100 title at the Canadian track and field championships on Friday, running 10.021 seconds to edge De Grasse by three-hundredths of a second.

“I knew from last year when I won, when [De Grasse] came back to form, I knew if I didn’t win this year that [win] would get nullified. So to speak within the media because they would say ‘Oh he was hurt. Your win last year was only because he was hurt,”‘ Brown said.

Brown was quicker out of the blocks, but De Grasse, a triple Olympic medallist, closed hard over the final 20 metres, bringing a Claude Robillard Stadium crowd — it included Montreal Canadiens forward Max Domi and retired MMA fighter Georges St-Pierre — to its feet.

Then the wait was on to determine the winner. The runners didn’t take their eyes off the scoreboard until Brown’s name flashed at the top. The 27-year-old from Toronto erupted in screams, running down the track pumping his fists.

“Never [waited that long],” Brown laughed. “Oh my god. That was crazy. I guess that just comes with it, a heavy dose of drama at the end of a 100 metres.”

The 27-year-old continued her reign at the national track and field championships, taking home her 12th 100m title with a time of 11.17 seconds. 0:29

The close finish was the punctuation mark on a thrilling night of racing. Both sprinters dipped under the 10-second barrier in the 100 semifinals, setting up the sizzling final.

De Grasse, wearing custom-made white Pumas with blue Sonic the Hedgehog on the toes, cruised to a time of 9.98 to win a heat that was plagued by three false starts.

Brown, with a Nike swoosh shaved in his hair, then did him one better, tying his personal best of 9.96 two heats later.

They couldn’t replicate the fast times two hours later. Temperatures had dropped, and the wind — both sprinters benefited from tailwind in the semis — had died.

Brown and De Grasse are friends off the track. But they’ve built a fierce rivalry on it. And Friday’s race perhaps provided a preview of Canada’s 1-2 punch at the world championships in October in Doha.

“I want to prove I’m a contender on the world stage, I know he is, he’s already proved it with his medals. I know I’m capable of it, so that’s my next aim,” Brown said.

De Grasse, a 24-year-old from Markham, Ont., was hoping to regain his Canadian title after two hamstring injuries shelved the better part of the past two seasons. De Grasse owned the Canadian 100 title between 2015 and ’17.

De Grasse ‘just happy to be back’

“I’m not at all, I’m just happy to be back,” said De Grasse, whose time in the semis was his fastest since Rio. “Fighting injuries for the past two years, I’m just happy to be back here on the track, getting back to where I was running before, getting close to my personal best, I feel like I’m in good shape, I feel like I’m ready for the rest of the season.”

De Grasse had never waited so long for a result either.

Brown will look to repeat as the Canadian 200 champion, while De Grasse is only racing the 100 in Montreal.