Calgary is about to become a curling mecca.

Weeks after CBC Sports first reported the Alberta city had been selected to host a number of important bonspiels, Curling Canada made it official on Tuesday that the Scotties, the Brier, the men’s world championship and mixed doubles national championship will all be hosted at Canada Olympic Park.

There is no timeline at this point for when the events will take place.

There are also two Grand Slam of Curling events being planned for the Calgary curling bubble as well.

Curling Canada officials said they continue to have dialogue with all levels of government and health officials to come up with the safest protocol, using many of the lessons learned from the NHL and NBA bubbles.

Six-time Scotties winner Colleen Jones says with COVID-19 cases in Calgary rising, there are still concerns about how the event will happen.

“For a lot of people this is great news,” Jones said. “The other side of the coin, though, is with COVID cases rising across the country there’s a lot of trepidation about how the provincial championships will go.

“Provincial associations are all meeting right now as we speak. There’s surveys going out asking curlers how this should look.”

In an email to CBC Sports, the Department of Canadian Heritage said it has received a request from Curling Canada to hold an international event in Canada — that would be the men’s world curling championship.

“An authorization will only be granted if plans offer robust protocols to mitigate the risk of importation and spread of COVID-19 in Canada,” the email said.

“An authorization would be conditional on ongoing support from provincial and local public health authorities and the provincial government, as well as a risk mitigation measures plan, developed and implemented by Curling Canada and assessed by the Public Health Agency of Canada.”

The curling extravaganza will most likely begin with the crown jewel of women’s curling, the Scotties. All of the events will be played without fans at The Markin MacPhail Centre at WinSport’s Canada Olympic Park.

While there are still many details to work through regarding player and coach safety, Alberta’s Minister of Culture, Multiculturalism and Status of Women, Leela Sharon Aheer, said it’s a positive thing for the province.

“This series of championship curling events is a fantastic opportunity for Alberta to once again show the world that our ability to host major hub city sporting events is second to none,” she said.

“We look forward to delivering an exciting and memorable curling experience for all players, participants and fans.”

The Scotties was originally going to be held in Thunder Bay, Ont., but the pandemic quashed those plans. Pre-event tickets had been sold out. However, Thunder Bay has been awarded the 2022 Scotties.

The Brier was going to be played in Kelowna but is now also set to take place in the Calgary bubble. It marks the first time the Scotties and the Brier are being played in the same city in the same season.

Defending Brier champion Brad Gushue is thrilled Curling Canada found a way to safely get curlers back to the pebbled ice.

“Every player I’ve talked to has wanted this to happen and [is] excited it’s going to happen,” Gushue said. “I’ve heard some players are a little hesitant but they are few and far between.

“I trust Curling Canada enough to do this in a safe manner. Our team is on board.”

Gushue says his team has had a number of conversations about what life in the Calgary bubble might look like, including potentially being away from family for nearly two months.

“That’s a hard one to swallow. To be honest though, it’s something we’ve discussed at length with our families,” Gushue said.

“There might be some teams that don’t do it. It’s hard not to do when you love the sport and you want to compete.”

Gushue is hoping to defend his Brier title and earn a spot back to the men’s world championship, having not been able to wear the maple leaf at last year’s championship in Scotland because of the pandemic. 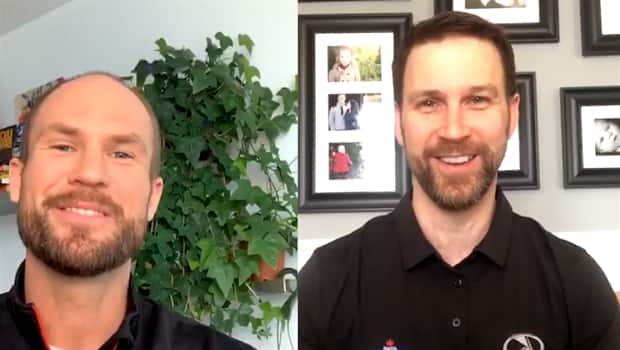 In an Instagram Live with our curling aficionado Devin Heroux, Brier 2020 champion Brad Gushue said he was ‘disappointed but not surprised’ about the cancellation of the curling world championships. 1:34

“Missing a world championship is not the end of the world but when you’re a competitive curler it tears at you a little bit,” he said.

“It weighed on me. There were moments throughout the summer when people would bring up the worlds and I thought this just sucks that I’m not going to get there.”

Gushue is also planning on playing in the mixed doubles national championship and two Grand Slam events that will also be housed in the Calgary bubble.

Preparing for lack of fans

The grind of six to seven consecutive weeks of curling is something Gushue is already preparing for, including not having any fans inside the arena to motivate him.

“I feed off the crowd,” he said. “To not have them around is going to be a challenge for me. I’m working with our sports psychologist on how to handle that. I don’t know how it’s going to affect me.”

Gushue says his Newfoundland and Labrador team have only played in two competitions this season — by far the least amount of time they’ve been on the ice during a season in their careers.

And they haven’t even been a complete team.

Geoff Walker is in Alberta with his wife, Laura, and their newborn baby. Walker opted to stay in the province as he didn’t want to leave and quarantine for two weeks before being able to play with Team Gushue.

“I still haven’t seen Geoff in person since the night we won the Brier,” Gushue said. “How do we get together to practise and play?”

That’s a common question many of the top curling teams in the country are asking these days as most of the foursomes have at least one player living out of the province — restrictions in each jurisdiction of the country differ, making it increasingly challenging for curlers to get together on the ice.

That brings up the issue of provincial playdowns.

With many provinces imposing strict rules around gatherings, curling associations are trying to formulate plans that would allow them to safely and fairly select provincial and territorial representatives to attend both national championships.

The announcement of this Calgary curling bubble comes a year out from the Roar of the Rings Olympic qualifiers scheduled for Saskatoon next November into December.

This is a crucial quadrennial for Canadian curling after both the men’s and women’s teams failed to reach the podium for the first time at the 2018 Olympics.