Calgary’s new Canadian Premier League team not only shares an equestrian facility with four-legged athletes. For four weeks of the show-jumping season, the professional soccer team will surrender its pitch to the horses.

Cavalry’s home opener Saturday is against York 9 FC at ATCO Field, otherwise known as the Meadows on the Green jumping ring. It has been converted to a 6,000-capacity soccer stadium.

“We’re ready. Chomping at the bit to use a term that’s familiar around here,” quipped Cavalry coach Tommy Wheeldon Jr.

“I think it will be one of the most unique places to play professional football.”

The world’s best horses and riders have been coming to Spruce Meadows since it opened in 1975. More than $ 6 million in show-jumping prize money is on offer in 2019.

Founded by Ron and Margaret Southern and operated by the family, roughly 160 hectares of indoor and outdoor riding terrain, stables and convention space are located in southwest Calgary near the foothills of the Rocky Mountains.

The soccer pitch is next to the International Ring, where Brazil’s Rodrigo Pessoa, Germany’s Ludger Beerbaum, American Beezie Madden and Canada’s Ian Millar and Eric Lamaze have ridden to Grand Prix victories over the years.

Spruce Meadows, whose president and CEO is Linda Southern-Heathcott, owns the soccer team.

A solution to host both sports

To accommodate Cavalry FC, equestrian elements were either removed or relocated behind the players’ benches, a new drainage system was installed and the field levelled.

Of the seven CPL teams, Calgary is one of three with a natural grass pitch as opposed to artificial turf (York 9 FC and HFX Wanderers FC will also play on grass).

“We think we’ve got an eloquent solution to host both sports in a very unique way,” said Spruce Meadows senior vice-president Ian Allison. “We were so fortunate that we had established drainage and turf. We’ve done some modifications for sure.”

So Cavalry FC’s 28-game schedule is road heavy during that span, with a home match squeezed in June 22 during a break between tournaments.

The team will train on other fields at Spruce Meadows when the pitch is otherwise occupied.

Test runs last summer made both Allison and Wheeldon Jr. confident the grass can recover from pounding hooves for crosses and corner kicks.

“It gets a lot of fertilizer,” Allison joked.

“We’re used to pretty significant divot repair after we move a thousand horses through here in the summer,” he continued. “Our grounds crew with the seed, sand mix and the tamping will level things out.

“Last year we tested it to see after jumping how quickly it would be suitable for playing soccer. We still had the water jump out here. Within 10 days, it was prefect.” 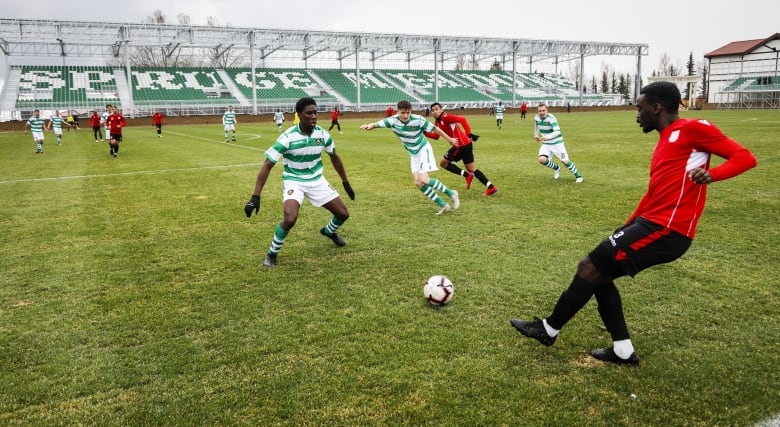 A comparable venue elsewhere in the world is the multi-purpose RDS Arena near Dublin.

The stadium’s main tenant is Leinster Rugby, but it also hosts the annual Dublin Horse Show as well as soccer, wrestling and concerts.

Spruce Meadows joins the legion of sport and entertainment companies acquiring properties to pull more people to its facilities more days of the year — wanting to be more than a one-trick pony.

Wheeldon says he made the equestrian-venue aspect of Spruce Meadows part of his sales pitch to players, who are about to find out if they like horses or if they’re allergic to horse hair.

“I don’t know much about them, but they’re nice?” said 23-year-old defender Nathan Mavila from London, England.

“Horses, whew. OK. I’m OK with that. I never watch it, but I like horses, yeah, yeah,” said French-born, Congolese forward Dominique Malonga.

Defender Joel Waterman of Aldergrove, B.C, was aware of the horse-soccer combo at Spruce Meadows.

“I kind of had an idea, but I didn’t know it was going to look this amazing and be this unique,” Waterman said. “I’d rather grass over turf any day of the week. It’ll be good.”