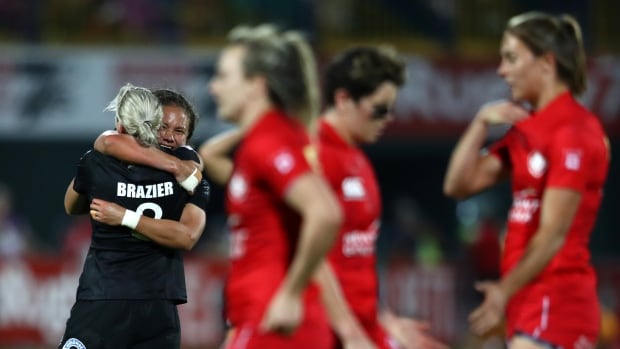 Team Canada has options. It can do one of two things.

It can beat itself up while reflecting on what might have been in Dubai. Or it can lift its collective head, and face front with confidence at what lies down the road.

Technically, of course, it will do both. Between now and next week’s World Sevens Series stop in South Africa, coaches and players alike will scrutinize the performances that led to a runners-up finish in Dubai.

The video sessions should be a source of great encouragement. The Canadians came, saw and almost conquered. It is a never a disgrace to lose to New Zealand in a gold medal game regardless of the circumstances.

Watch Canada duke it out with New Zealand in the Cup Final of the HSBC World Women’s Rugby Sevens Series from Dubai. 27:52

You can argue about a controversial call that gifted possession of the ball to New Zealand in the final minute of the match. You can debate it changed the course of the outcome at a pivotal moment. Fact is, the referee made her decision based on the best information available in real time. If she wasn’t going to change her mind then, there’s zero chance she will now.

What does matter is that Canada gave New Zealand all it could handle. Following a mediocre start to the season at the USA Sevens, the Canadians proved to their rivals, and more importantly to themselves, they are a legitimate contender.

You simply cannot buy the sort of confidence that will bring Team Canada. There is always room for improvement on every team but, going forward, the Canadians have started to build a solid platform early in a defining season.

Elite athletes, regardless of their sport, tend to share one strong mental trait. They all have short memories. Harnessing the discipline allows them to learn and move on, rather than dwell on podium changing errors.

Yes, the Canadians blew a halftime lead. Yes, they allowed the Black Ferns too much time and space to successfully defend their Dubai title in the closing seconds. But equally, yes, Canada can point to its body of work and find plenty of positives.

Ghislaine Landry and Bianca Farella came as advertised. Farella sprang right out of the box with a pair of tries against the Russians, while captain Landry also bagged a brace to lead her country to a semi final victory over Olympic champions Australia.

Charity Williams and Karen Paquin also caught the eye. Williams’ experience is catching up to her raw speed that yielded 4 more tries, while Paquin’s double in the quarter final was the key difference against the unpredictable French.

Ultimately, Canada came up one score short. But it has set a high bar quickly in a new campaign. It has sent a strong message to its rivals who are dreaming of displacing Canada from the Olympic podium in 8 months time.

Make no mistake – the Canadians will need to be at their very best by the time Tokyo rolls around. New Zealand, Australia and the USA all equally believe they should be collecting medals. Canada’s pre-Christmas message needed to be loud and clear.

Dubai, however, was just one tournament in an expanded world series. The Canadians must now show they can maintain that level of intensity heading to Cape Town, South Africa next weekend. They will travel brimming with self belief, but the target on their back just got a little larger.

In the men’s competition, Canada’s 10th place finish was entirely to be expected. A tough opening loss, after twice leading Samoa, set the tone. On a weekend when the Canadians had to face both New Zealand and Fiji the odds were never in their favour.

The gold medal game may have been a glimpse of the future. South Africa deserved its victory over New Zealand in an error-strewn finale. It’s just possible they will dance again for an Olympic gold medal in Japan next summer.