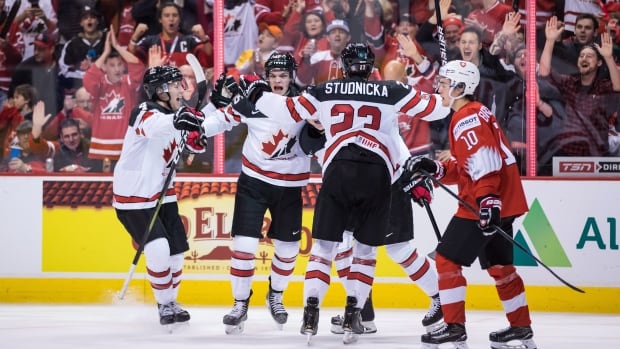 Noah Dobson scored the game-winner as Canada beat Switzerland 3-2 at the world junior hockey championship on Thursday in Vancouver.

Philipp Kurashev registered a pair of power-play goals for the Swiss.

Canada has two wins in round-robin play, while the Swiss have yet to tally a victory at the tournament.

The Swiss gave it everything they had late in the 3rd period, but the Canadians hung on for a 3-2 win in Vancouver, to sit atop in Group A at the 2019 IIHF World Junior Championship. 1:50

The Canadians opened the scoring just 36 seconds into Thursday's game on Glass' marker.

The play started with Maxime Comtois stealing the puck from Swiss defenceman Simon le Coultre along the boards and dishing it to Nick Suzuki.

The Montreal Canadiens prospect made a crisp pass to Glass who slammed it in past Schmid.

But after a hot start, Team Canada cooled down and struggled to get deep into Switzerland’s end.

"They're a good team, but we got into penalty trouble, especially at the end," Glass said. "We had some trouble with them pre-tournament. They played a good game. They play together, and they're fast. But in the end, we came out with the win, so that's all that matters."

With less than a minute to go in the first frame, Canadian centre Jaret Anderson-Dolan was called for roughing.

The Swiss couldn't convert with the man advantage before the end of the period, but carried the momentum into the second and tied the game up 45 seconds in.

Chicago Blackhawks prospect Kurashev collected the puck high in the slot and ripped it past Scott.

The goal marked the first time Canada had been scored on in this year's tournament.

Scott kept his team in the match up as the Swiss tried to claw out another point.

His most spectacular save of the night came almost five minutes into the second when Switzerland’s Yannick Bruschweiler fired a laser at the Canadian net, but Scott snatched the puck out of the air with his glove.

Canada went up again nearly two minutes later, following a give and go.

Shane Bowers was down at the Swiss goal line when he got a back-handed pass out to Entwistle, and the right-winger put a quick shot past Schmid.

His goal on Thursday seemed to revitalize the Canadians, who responded with more speed and a harder forecheck.

Dobson added some insurance for Team Canada 12:08 into the second frame.

The defenceman held off Switzerland’s Janis Moser as he streaked down the wing before firing a shot past Schmid to make it 3-1 Canada.

Dobson's goal comes after the 12th-overall pick at last year's draft was held off the scoresheet Wednesday.

There for the taking

Kurashev brought his squad back within one with just over two minutes to go in the matchup after Canada's Nick Suzuki was called for tripping.

Switzerland got an extra attacker by pulling their goalie and Canada lost some defensive power when Markus Phillips broke his stick seconds into the power play.

The result was a flurry of action in front of the Canadian net and Kurashev poking the puck in past Scott.

Late penalties threatened Canada's lead in the game's dying minutes, but Scott and his teammates held on for the win.

"We could have won that game, but it was a fun game to play in front of 17,000 people," said Swiss forward Matthew Verboon, a dual Swiss-Canadian citizen. "We proved that we can play with anyone."

Team Canada will be back in action Saturday, battling the Czech Republic in Vancouver.