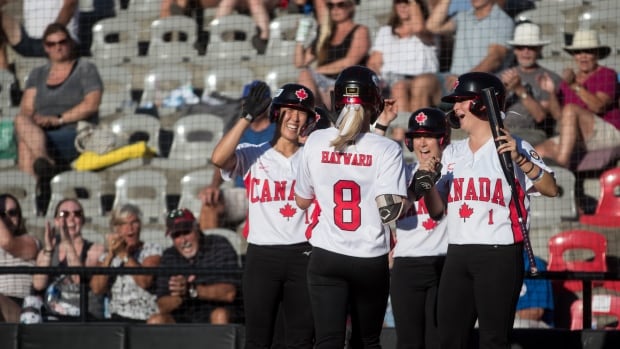 The Canadian women are treating the Super Round at the Softball Americas Olympic Qualifier the same way they did round robin — with lopsided victories.

Jennifer Gilbert and Kaleigh Rafter both went deep as the Canadian women’s softball team beat Venezuela 11-0 on Friday in the first game of the Super Round.

Danielle Lawrie pitched four shutout innings for the Canadians, allowing just one hit with four strikeouts in another game that ended early with the mercy rule.

Canada has yet to give up a run through four preliminary-round games and one Super Round contest, outscoring its opponents 68-0 in the process.

Canada will play Mexico on Saturday in another Super Round matchup.

Canada opened the tournament on home soil Sunday by routing Cuba 17-0 in a game that lasted just three innings, then was handed the victory against Argentina on Monday after the South Americans forfeited the contest, before hammering Guatemala 19-0 in a four-inning game on Tuesday.

Canada’s women’s softball team breezed past Venezuela 11-0 in the super round at the Americas Olympics qualifier, moving one win away from a berth at the 2020 Tokyo Olympics. 1:23

They faced their toughest test on Wednesday against Puerto Rico, but came away with a 3-0 victory that guaranteed it first place in Group A, then pummelled Bermuda 18-0 in a four-inning contest to wrap up the preliminary round.

At No. 3 in the world, Canada is the top-ranked team at the regional Olympic qualifier.

The top two teams at the tournament will qualify for the Tokyo Olympic Games in 2020.

Argentina and the British Virgin Islands were expected to make it a 12-team event, but withdrew from the competition citing unexpected circumstances in their own countries, according to the tournament website.

Softball is being included in the Olympic program for the first time since 2008, when Canada finished fourth in Beijing. The sport has already been nixed from the 2024 Olympics in Paris.