When a Montreal medical team pulled off the country’s first face transplant last spring, it was a historic moment for Canadian medicine, but the patient’s recovery remained far from certain.

Maurice Desjardins’s life since then has been full of setbacks, but he has so far avoided the worst-case scenario — his body’s rejection of the graft.

As Radio-Canada’s current affairs program Découverte reported last year, Desjardins was disfigured in a 2011 hunting accident. He was left with half of a face, as well as chronic pain and severe damage to the nerves, muscles and bones in his face.

Everything changed last spring, when surgeon Dr. Daniel Borsuk and his team performed the high-risk procedure at Montreal’s Maisonneuve-Rosemont Hospital. They successfully grafted a donor’s jaw, teeth, nose and cartilage onto Desjardins’s face — all in one piece. 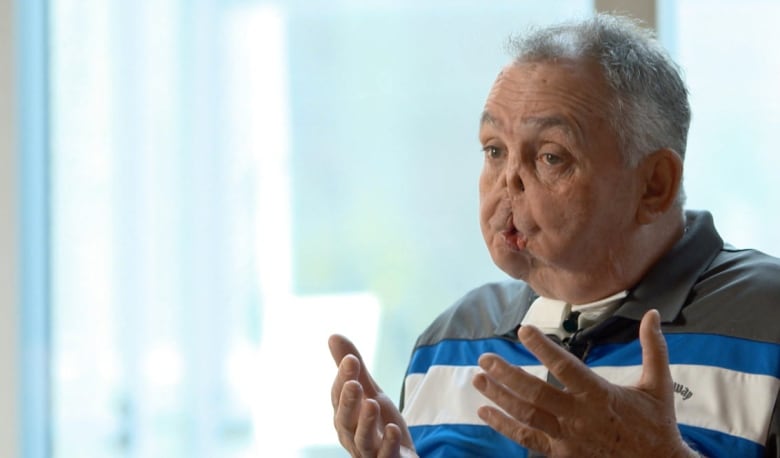 Desjardins, pictured here before his surgery in 2018, was severely injured in a 2011 hunting accident. (Jérôme Voyer-Poirier/Radio-Canada)

“I was in control during the graft, but afterwards, during the recovery time, I was no longer in control of anything,” Borsuk told Découverte recently. He said it’s been a stressful and challenging year for Desjardins.

Eating is one of many tasks that remain difficult for Desjardins, who still relies on a feeding tube. Anything he can eat has to be ground up first. Since the operation, he’s lost 65 pounds.

Much of his care rests on the shoulders of his wife, Gaétane, who helps administer the 15 or so daily medications, and drives Desjardins back and forth between their home in Notre-Dame-de-la-Sallette and checkups two hours away in Montreal.

When I see Maurice, I am relaxed. It’s when I’m not with him, that’s when I’m stressed.– Dr. Daniel Borsuk

“I’m always afraid of making a mistake. There are so many different types of medication. I have to pay close attention to what I’m doing,” she told Découverte. “It’s really a 24/7 job.”

It all became too much for Gaétane to juggle, so she gave up her job to take care of her husband full-time. That was a financial blow to the couple.

Borsuk said he didn’t realize there was a lack of financial support for transplant patients.

“I think that we have a great public [health care] system and I think it works really well, but the problem with some of these transplant patients is most of them don’t live near a transplant centre,” he said. 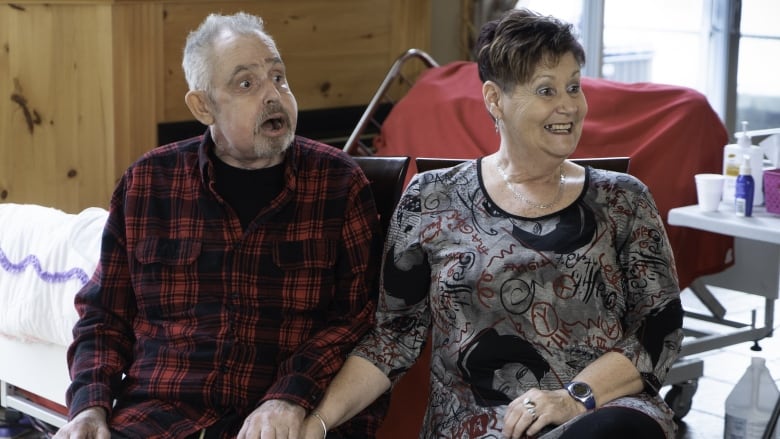 Desjardins and his wife say they’re grateful to the family of the donor for their sacrifice. (Charles Dagenais/Radio-Canada)

“They have to leave their homes, get in their car, pay for parking, pay for gas, pay for medication, which aren’t always covered. And so it ends up being a quite expensive year for these patients.”

During their shared journey, Dr. Borsuk and his patient have grown close.

“There have been a lot of ups and downs. A lot of waves,” Desjardins said in a recent interview with Découverte.

Borsuk said that every success and obstacle is felt by both of them. During checkups, it’s normal for them to clasp hands or even hug.

“I am close to my patients, but with him, it’s another level,” said Borsuk. “Maybe it’s a bit too close? But that’s on me.”

The surgeon admitted that it can be difficult to manage relationships with patients like Desjardins, whose day-to-day well-being is often on his mind. 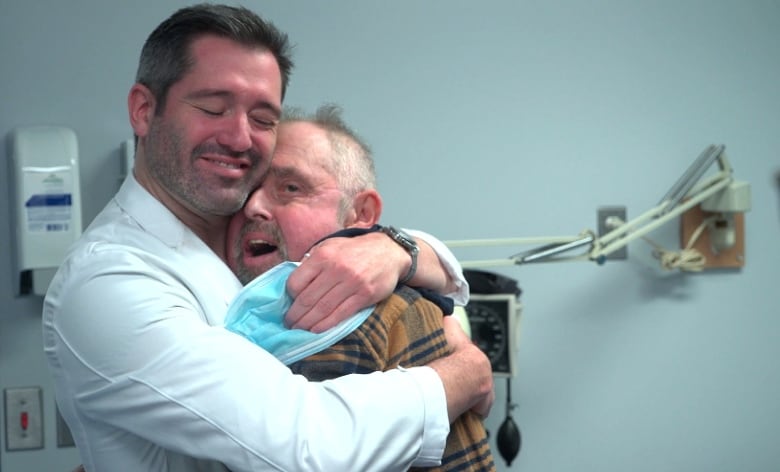 Dr. Daniel Borsuk and Desjardins share a hug. After a year of ups and downs since the surgery, the two men have grown close. (Charles Dagenais/Radio-Canada)

“When I see Maurice, I am relaxed,” Borsuk said. “It’s when I’m not with him, that’s when I’m stressed.”

The price of his new face is that Desjardins must take powerful immunosuppressants for the rest of his life. The medication is a double-edged sword: while it helps prevent his body from rejecting the transplant, it also leaves him vulnerable to even the slightest infections.

“He caught everything that he could catch,” Gaétane said. Three major infections sent Desjardins to hospital repeatedly over the course of his recovery. He spent a total of three months in hospital.

It all came to a head in March, when he fell ill with an infection of the digestive system known as diverticulitis. A pocket of his intestine became infected, and then ruptured.

He caught everything that he could catch.– Gaétane Desjardins

He underwent a surgery so that doctors could attach a temporary colostomy bag, an external pouch that will collect his body’s waste while his intestine heals.

The hospitalizations, plus the incessant checkups, have taken a toll on Desjardins and his wife. For a few months, he lost his morale and stopped bothering with his exercises, which are essential for him to regain complete control of his face and his jaw.

“You know, I can’t blame him,” Dr. Borsuk said. “It’s hard to focus on doing your exercises when you have things that are physically hurting you.”

April 2019 was the first time in a year that Desjardins had gone two weeks without an infection.

But the break from his exercises means Desjardins can no longer close his mouth as fully as he could before, and his speech is limited. It’s difficult for him to express himself.

When Desjardins speaks, Gaétane will often “translate” for the benefit of other people, because his speech can be difficult to understand. 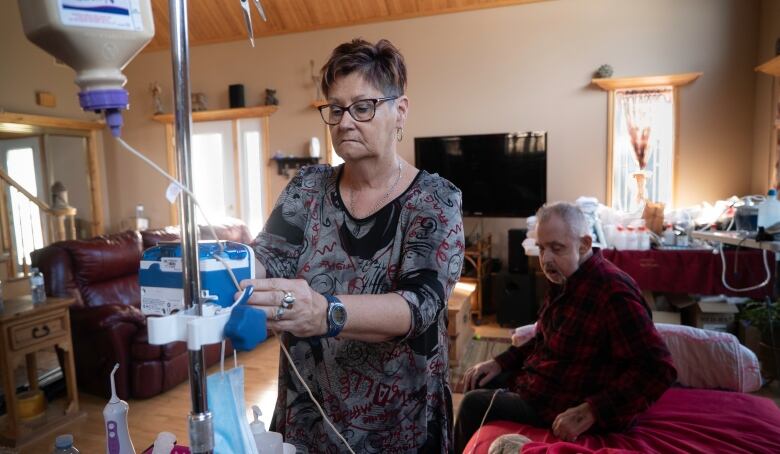 Gaétane Desjardins said she had to give up her job, because taking care of her husband is too demanding. (Charles Dagenais/Radio-Canada)

Borsuk said he’s confident that his patient will work hard to regain control of his jaw.

“I know he’ll get it back,” he said. “It’s like when you have a cast on your wrist: If you don’t move your wrist for a month, it’s going to be stiff.”

Dr. Suzon Collette, who is responsible for monitoring Desjardins’s recovery, said what he’s gone through in this past year is typical for a transplant patient.

“There are good times, months where everything is going well, and then there are steps back, defeats, unexpected things,” she said.

Despite the obstacles, Collette said at the end of the day, the patients find a way to make it through.

One thing Desjardins has not struggled with is accepting his new physical identity. The medical team had been afraid that he might be upset or disturbed when he saw the reflection of a stranger in the mirror.

Now he finds himself handsome, and it’s true. He is.– Gaétane Desjardins

But Desjardins said that wasn’t difficult for him. More than anything, he’s just thankful.

“It’s going very well. I am so grateful to the donor’s family,” he said.

Gaétane said she likes the way her husband looks. She said that before the accident, he never thought much about his face.

“Now, he finds himself handsome, and it’s true. He is,” she said.

Despite all the post-surgery pain and difficulty, Desjardins said he has no regrets about the procedure.

“It was worth it,” he said recently, while sitting on his couch at home, holding hands with his wife.

Gaétane agreed, smiling at her husband.