Canada’s multi-billion dollar arms sale to Saudi Arabia includes a substantial number of “heavy assault” armoured vehicles and a maintenance deal that would see the Ontario-based manufacturer embed teams at multiple locations throughout the kingdom.

CBC News has obtained documents that — for the first time — lay out the major elements of the original agreement signed in early 2014 and approved by the previous Conservative government.

The $ 15 billion agreement was given the further blessing of Prime Minister Justin Trudeau’s Liberal government in the spring of 2016 when it began issuing permits for the export of the combat vehicles.

Much of the heated public debate about the arms sale has taken place in a vacuum because specific details of General Dynamics Land Systems Canada’s (GDLS) contract were sealed under a confidentiality agreement demanded by the Saudi government.

Both the Liberals and Conservatives have used the absence of details to downplay the destructive firepower of the vehicles being sold.

Former prime minister Stephen Harper once described them as “trucks.” Before the last election, Trudeau called them “jeeps.”

CBC News has obtained internal records that show the deal struck in February 2014 involved 928 of the most modern light armoured vehicles, known as the LAV 6.

The order also includes 119 LAV 6 vehicles of the “heavy assault” type, with powerful 105 millimetre canons affixed to their turrets.

Another 119 are configured as “anti-tank” vehicles and a further 119 are designated as “direct fire” support, with a two-man turret and 30 millimetre chain gun.

There has been talk in the defence industry that some details of the order have been modified over the last four years, and that it’s possible fewer vehicles may be sold.

The company was asked to comment on the documents and the current status of the deal.

Delivery of the first vehicles was slated to begin in early 2017, according to internal Global Affairs Canada emails obtained by CBC News under access to information legislation.

‘These are combat-ready vehicles … certainly not the jeeps that the government once told us that they were.’– Cesar Jaramillo, Project Ploughshares

The government agency that brokered the deal — the Canadian Commercial Corporation — also refused to discuss the documents.

“All details of the contract remain commercially confidential,” said an unsigned email from the agency.

“Further, the documents you mention below are not internal to CCC nor the Government of Canada, therefore, we decline to comment.”

Internal government emails, obtained in 2015 by The Globe and Mail, show the Saudis stipulated that releasing the details of the deal would amount to “breaking the terms of the contract.”

Stephen Harper personally reassured the late Saudi King Abdullah, in writing, that Ottawa would hold up its end of the bargain, the newspaper reported.

Defence experts and human rights advocates, particularly those who have fought the deal, said the documents represent the first clear snapshot the Canadian public has seen of what the government is allowing to be exported.

“These documents raise very important questions and I think our understanding of what was announced in 2014 has to change, needs to change,” said Cesar Jaramillo, the executive director of Project Ploughshares.

“This shows us that these are combat-ready vehicles and certainly not the jeeps that the government once told us that they were.” 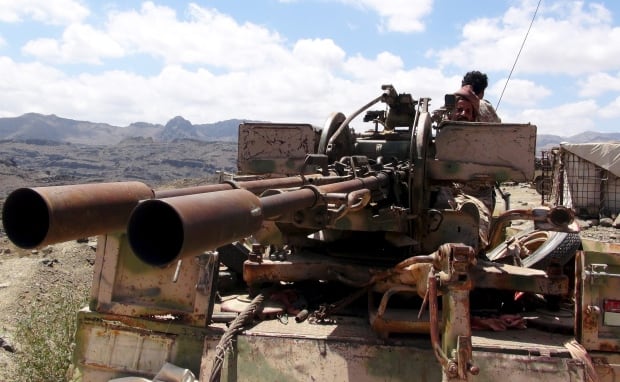 A Southern People’s Resistance militant loyal to Yemen’s President Abd-Rabbu Mansour Hadi mans an anti-aircraft machine gun the militia seized from the army in al-Habilin, in Yemen’s southern province of Lahej, March 22, 2015. There are concerns among human rights groups that the Saudis could use Canadian-made armoured vehicles against Houthi fighters in Yemen. (Nabeel Quaiti/Reuters)

The records obtained by CBC News show the contract between London, Ont.-based GDLS and the Saudis goes much deeper than just than just selling the vehicles.

It also involves a 14-year support program that covers ammunition, crew “training in Canada/Europe” and “embedded” maintenance, with a fleet management team in 13 workshops.

The reference to Europe has to do with training Saudi crews on the gun system, slated to take place in France.

The service agreement in Saudi Arabia would be delivered through a subsidiary of the Canadian manufacturer located in Riyadh, said the documents obtained by CBC News.

The support deal is significant on a couple of different levels, said Dave Perry, an expert in defence procurement at the Canadian Institute of Global Affairs.

For starters, it partly explains the enormous price tag. Most of the value in defence deals today is not in the hardware, but in the long-term maintenance and support services being provided, said Perry.

It could give Canada “a fairly significant amount of leverage” going forward, he added, pointing out that the support deal could be used to apply diplomatic pressure in the event Canada has new concerns about Saudi Arabia’s human rights record.

“If we are simply selling them a piece of equipment and walking away, you don’t really have much recourse afterwards to do anything, if they do something that you don’t want,” he said.

Last summer, images surfaced online that showed Canadian-made armoured vehicles, manufactured by another company, being used by the Saudi state in its long-running conflict against the Shiite population in Qatif, a restive portion of eastern Saudi Arabia.

One of the video clips also showed a light armoured vehicle, apparently manufactured by GDLS, operating in the region of Awamiyah.

The Liberal government launched an investigation, which ended with “no conclusive evidence that Canadian made vehicles were used in human rights violations.”

Foreign Affairs Minister Chrystia Freeland told a House of Commons committee a few weeks ago that she was satisfied.

At the same time, the Liberal government introduced amendments to Bill C-47, which allows Canada to join the global arms trade treaty. The changes would, when passed, give the federal cabinet broader powers to deny export permits if there is the “substantial risk” of human rights violations.

Freeland has shown no appetite to revisit the Saudi deal.

“Let’s be clear, from this day forward, I want us to hold ourselves to a higher standard on the export of controlled goods from Canada,” Freeland said. “On a matter of principle, Canada will honour, to the greatest extent possible, pre-existing contracts. We can all understand and appreciate the fundamental importance of being able to trust Canada.”

Officials in Freeland’s office would not answer questions directly related to the leaked documents on Monday. Instead, a spokesman pointed to the ongoing debate over over Bill C-47.

“We are committed to a new and higher standard for arms exports,” Adam Austin said in an email.

Jaramillo said it would be in the public’s interest for the Liberals to release a copy of their recent investigation and to explain how they came to the conclusion that no abuse took place in eastern Saudi Arabia involving Canadian vehicles.

Releasing that investigation report, he said, shouldn’t have any effect on the current sale.