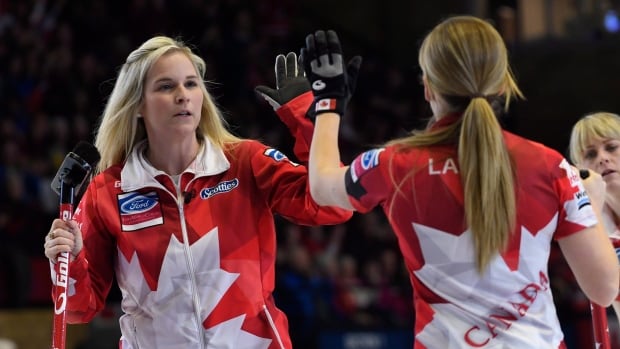 It’s as close as you can get to a curling pick ’em.

Two teams in their prime playing for gold in front of a rocking crowd at the North Bay Memorial Gardens. The Sunday afternoon matchup should be a doozy.

Playing the United States for the second straight day, Jennifer Jones needed some clutch shots to lift her rink through the women’s world championship semi-final.1:48

“I think it’s going to be a matter of who is the most prepared to deal with what comes at them because there’s going to be a lot of great shots on both sides,” said Canadian coach Elaine Dagg-Jackson.

“I think it’s going to be a hard-fought battle.”

Jones pulls it out late

Hasselborg advanced with a 7-6 victory over Russia’s Victoria Moiseeva in the early semifinal. Jones held on for a 9-7 victory over American Jamie Sinclair in the evening.

Jones jumped out to a 3-0 lead but the Americans chipped away and tied the game with a single in the ninth end. The Winnipeg skip came through with a hit for a deuce in the 10th for her 13th straight victory.

“It’s always hard to get an early lead because you have to really defend it for a long time,” Jones said. “We know that it’s really tough to do that, but I liked how we played.”

She’ll need to be better against the confident Hasselborg, who thrives under pressure and isn’t intimidated by a road crowd. Sweden beat South Korea’s EunJung Kim to win Olympic gold last month in Pyeongchang.

However, one major difference between Canada and South Korea is experience. Jones, who won world gold in 2008, is playing in her sixth career world championship.

“It’s going to be tough to beat them and we know that,” said Swedish coach Maria Prytz. “But it’s not impossible.”

Canada scored three in the opening end of the semifinal to stir up the boisterous sellout crowd of 3,797.

Sinclair was forced to a single in the second end and missed an in-off in the third. Jones had a chance for three but settled for a deuce as her final throw was heavy.

The Canadians kept the pressure on in the early going. Sinclair was forced to another single in the fourth end, making a tough draw against three.

The American skip made a great double takeout in the fifth to lie two but Jones hit for a single. Sinclair picked up a pair in the sixth and a draw for two in the eighth end made it a one-point game.

“It wasn’t the start that we had hoped for,” Sinclair said. “But it was a heck of a game and a heck of a battle. I’m super proud of the girls for hanging in there and never giving up.”

Jones, who won Olympic gold in Sochi four years ago, was heavy with a tapback attempt in the ninth. Tied with hammer coming home, Canada used nice tick shots to prevent the Americans from setting up a steal.

“I wish I could have a couple of those draws back,” Jones said of her overall performance. “I threw what I wanted to throw and we guessed wrong so we’ll just have to guess a little bit better tomorrow.”

Jones earned the top seed in the six-team playoff by posting a 12-0 round-robin record.

Sinclair, the No. 6 seed at 6-6, reached the semifinal by topping South Korea 10-3 in a qualification game. The Americans scored a whopping seven points in the ninth end.

Sinclair, a dual citizen who grew up in Manotick, Ont., has been based in the United States for the last quadrennial. Moiseeva beat Anna Kubeskova of the Czech Republic 7-3 in the other qualification game.

In the early semifinal, Hasselborg opened with a deuce and was in control of the game despite the close scoreline.

The Swedish skip stole a pair in the sixth end and nailed a hit and roll for two points in the eighth. She sealed the victory with a takeout in the 10th end.

“We took it to [them] and I think we just kept on going for that lead and we controlled the scoreboard,” Hasselborg said. “I’m very happy with the team’s performance.”

The Canadian rink will have choice of hammer or stones in the final. Russia will play the United States for bronze on Sunday morning.

Jones defeated Hasselborg 8-4 in round-robin play. Sweden entered the playoffs with a 10-2 record.

Three of the four members of the Sweden team were named tournament all-stars by the World Curling Federation.

Hasselborg, third Sara McManus and lead Sofia Mabergs were honoured along with Russian second Galina Arsenkina. The all-star selections were based on shooting percentage through the round-robin stage.

Canada has won a leading 16 gold medals since the inaugural world women’s championship in 1979. Sweden is next with eight titles.