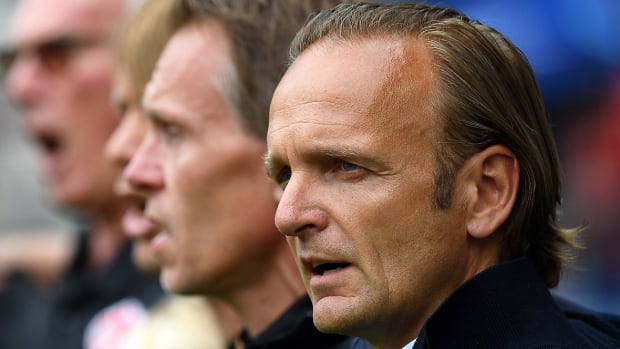 He’s run through a gamut of emotions since the 1-0 round-of-16 loss to Sweden on June 24 that sent the Canadians home from France earlier than expected.

“Sadness, disappointment, disbelief and then fury,” said the Dane. “I was just furious about not [still] being at that tournament.”

Then his coaching instincts took over.

“Reflection and learning and then from there the planning,” he continued. “The great thing about this is you don’t have to wait two years for the next pinnacle event. The next pinnacle event is right around the corner. And we definitely took some learnings with us on where we need to improve.”

‘Everything looked great until their goal’

“Everything looked great until their goal. We got a transition wrong, we missed a penalty and then you’re out of the World Cup,” he said.

Heiner-Moller says his team’s play in the final third of the field was the issue.

Janine Beckie was robbed of a goal when Swedish keeper Hedvig Lindahl made an incredible save, leading her country to a 1-0 win. 1:23

“It’s not that we didn’t know that those were the key factors that we had to put attention into, which was the final third. I thought we did, but obviously we didn’t put enough attention into that. Or it didn’t transfer into the matches. So that’s what we’re looking at. That’s the main learning from that tournament.”

“The difference between winning and losing isn’t big, but the consequences are,” he added.

Heiner-Moller is awaiting details of the CONCACAF Olympic qualifying tournament, expected to take place in late January. He says his team will take advantage of two of three FIFA international windows before that but nothing is confirmed yet.

He plans to hold a camp in September, the first for the team since the World Cup. He says he expects all of his players from the World Cup roster to be in contention.

The Canadian women, who dropped to seventh from fifth in the world rankings after the World Cup, opened the tournament in France with wins over Cameroon (1-0) and New Zealand (2-0) before finishing group play with a 2-1 loss to the Netherlands.