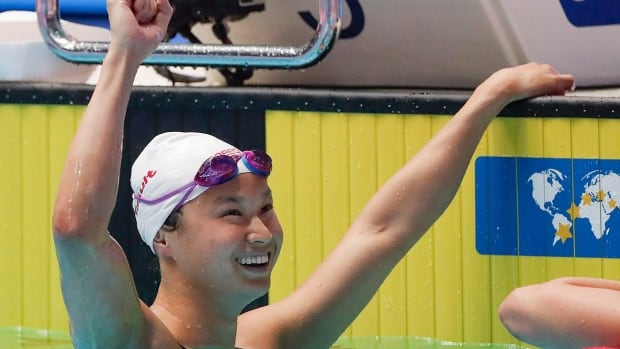 Sjostrom was nearly one second ahead of MacNeil early on but the Canadian took charge and caught the reigning Olympic champion, handing the Swede her first loss in the event since 2013 and capturing Canada’s first gold medal at these worlds.

The 19-year-old MacNeil, making her worlds debut on the senior national team, turned in the eighth-fastest performance of all-time and is the second-fastest woman in history. She is also just the second female Canadian swimmer to ever win a world title, joining Kylie Masse, who won the 100 backstroke two years ago at worlds.

Sjostrom, who is tops in the world across the 50, 100 and 200 freestyle, crossed the line in 56.22. She has slipped a little in butterfly of late and that allowed MacNeil to take her throne.

Emma McKeon of Australia, who finished second to Sjostrom in the100 butterfly in the 2017 world final, was third on Monday in 56.61.

MacNeil, who recently completed her freshman year at the University of Michigan, was part of the Canadian women’s 4×100 freestyle relay team that won a bronze medal on Sunday at Nambu University Municipal Aquatics Center.

Kayla Sanchez, Maggie MacNeil, Penny Oleksiak and Taylor Ruck posted a time of three minutes 31.78 seconds to lead Canada’s 4×100 relay team its first medal at the event since 1978. 6:18
She qualified second for Monday’s 100 butterfly final in a personal-best time of 56.52, only 6-100ths of a second off Penny Oleksiak’s Canadian mark from her silver-medal winning performance at the 2016 Olympics in Rio. Sjostrom qualified first in 56.29.

Canada’s Syndey Pickrem challenged for the lead over the last 50 metres of the women’s 200 individual medley final on Monday but came up short, placing third in two minutes 8.70 seconds.

Katinka Hosszu, the unbeatable Hungarian, prevailed in a 2019 world-leading time of 2:07.53 for her fourth consecutive gold medal in the 200 IM at worlds. The 2016 Olympic gold medallist is also the three-time defending world champion in the 400 IM. Ye Shiwen of China rounded out the podium on Monday in 2:08.60.

Japan’s Yui Ohashi, who was considered a medal contender on Monday, was disqualified from the race.

The 22-year-old Pickrem, a dual Canadian/American citizen, shone at the recent FINA Champions Swim Series in Indianapolis, finishing second in the 200 medley. Her 2:08.61 put her just behind Hosszu (2:08.50) and ahead of Melanie Margalis (2:10.41) of the United States.

Kylie Masse, the reigning world champion in the 100 backstroke, qualified first for Tuesday’s final in 58.50 seconds. The native of LaSalle, Ont., won world gold in 2017 with a then-world record time of 58.10, breaking a mark that had stood for eight years.

But Masse’s time had a much shorter shelf life as American Kathleen Baker swam 58-flat at the U.S. swimming championships last July.

Taylor Ruck, Masse’s teammate, was third in qualifying Monday in 58.83 while Baker was fourth in 59.03.

The British swimmer claimed the title in 57.14 seconds, a night after he became the first man to break 57 seconds in the semifinals. Peaty was under his own world-record pace at the turn before coming home a full body-length in front and 1.32 seconds ahead of teammate James Wilby.

Horton given warning for podium protest

China’s Sun Yang was back in the pool for the 200 freestyle semifinals a night after winning the 400 free. He qualified second-fastest behind Clyde Lewis of Australia. The final is Tuesday night.

Earlier Monday, FINA’s executive board met in Gwangju to discuss Mack Horton’s podium protest against Sun and decided to send a warning letter to Swimming Australia and to Horton.

Australian Mack Horton refused to stand next to Chinese swimmer Sun Yang on the men’s 400-metre freestyle podium. Sun is currently facing allegations of doping rule violations that could result in a ban from the Tokyo 2020 Olympic Games. 0:59

“While FINA respects the principle of freedom of speech, it has to be conducted in the right context,” the board said in a statement.

Horton refused to take his spot on the medals stand or shake Sun’s hand after finishing second to the Chinese star in the 400 free. The Aussie swimmer is angry that Sun, who served a three-month doping suspension in 2014, is being allowed to compete in Gwangju before he faces a Court of Arbitration for Sport hearing in September that could potentially end his career.