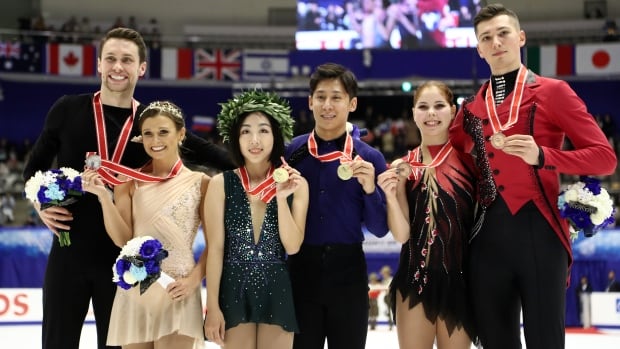 Kirsten Moore-Towers and Michael Marinaro captured their second silver medal of the Grand Prix figure skating season, taking a second-place finish on Saturday at the NHK Trophy in Japan.

The pairs skaters, who captured silver at Skate Canada International last month, booked a spot at next month’s Grand Prix Final with the podium finish in Sapporo.

Olympic silver medallists Wenjing Sui and Cong Han of China won the pairs event with a total of 226.96 points and their second victory of the Grand Prix circuit this season.

The Canadian champions had 208.49 points while Russians Anastasia Mishina and Aleksandr Galliamov took bronze with 203.35.

Canadians Kirsten Moore-Towers and Michael Marinaro won their second silver medal of the Grand Prix figure skating season, finishing in second place in the pairs competition at the NHK Trophy in Sapporo, Japan. 7:30

Hanyu had a solid 18-point lead after the short program and didn’t falter in the free skate. His only mistake was underrotating a triple toeloop as part of a combination jump.

Kevin Aymoz of France was second with 250.02 points followed by Canada’s Roman Sadovsky, who picked up a bronze medal with 247.50.

Teenager Alena Kostornaia won the women’s free skate to claim her second title of the season and complete a sweep of the International Skating Union’s Grand Prix series by Russian women.

Kostornaia opened with a triple axel-double toeloop combination but stumbled on the landing of her next jump, another triple axel. The 16-year-old skater added six more triple jumps to finish with 154.96 points for a total of 240.00.

Zagitova opened with a triple lutz-triple loop combination and scored high points for a triple flip and another triple lutz later in her routine.

Adding to her win in France, Kostornaia also qualified for the Grand Prix Final. Russian women have now won all six of the ISU’s GP series titles.

Gabriella Papadakis and Guillaume Cizeron of France won the ice dance title with 226.61 points. Alexandra Stepanova and Ivan Bukin earned silver with 208.81, and Charlene Guignard and Marco Fabbri of Italy took the bronze medal with a total of 198.06 points.

The Grand Prix Final is from Dec. 5-8 in Turin, Italy.

The two analyze each event with a fun, tongue-and-cheek approach that will make you LOL. New episodes are posted each Grand Prix Sunday on the CBC Sports YouTube channel. If you haven’t already, watch the latest episode on the Grand Prix of Russia: