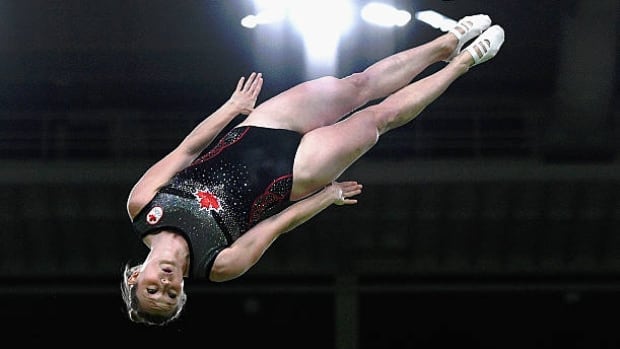 Canada’s Rosie MacLennan captured a bronze medal in women’s individual trampoline on Sunday at the trampoline world championships in Tokyo.

Canada leaves the competition with three bronze medals, an Olympic qualification spot in women’s trampoline, and four quota spots for the 2021 World Games in tumbling and double mini-trampoline.

MacLennan, of King City, Ont., entered the individual trampoline competition as the defending world champion and was able to put down a solid routine to score 54.820.

Vancouver’s Samantha Smith finished seventh with a score of 53.450.

“I decided to go with a slightly easier routine today, and to just keep it high and clean, and I think it paid off, I was able to feel a little more stable on the trampoline and I was really happy with it,” MacLennan said. “I came into this competition trying to focus on one day at a time, and to put out the best routines I could, and I was able to do that, and to be able to come out with a medal is really unbelievable.

I’m really excited to get back home and get back training and keep pushing for the World Cups next year.”

“The women’s trampoline team really shone at these world championships,” Cockburn said. “A bronze medal in women’s individual, women’s synchro, and the team event shows the talent and depth we have in Canada.

“These podium performances and earning the Olympic quota for Tokyo 2020 sets the tone as we lead into an Olympic year.”