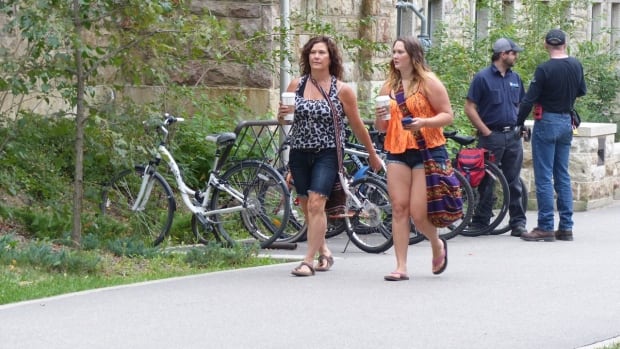 It’s not just kids who get too much screen time and too little physical activity — adults are falling short, too.

That’s according to the first-ever report card for adults from Participaction, a non-profit group that promotes healthy living and typically ranks children’s fitness levels.

The new report gives Canadians over the age of 18 a D for overall physical activity, finding most spend far too much time sitting and not enough time getting heart-pumping exercise.

Adults get an F when it comes to moderate-to-vigorous activity, with the report finding just 16 per cent of adults get the recommended 150 minutes each week.

Participaction scientist Leigh Vanderloo acknowledges many Canadians are busy with work and family obligations, but she urges people to find pockets of time throughout the week.

She says that could include standing more at the office or parking the car further from your destination and walking the rest of the way. The key is to make physical activity a key part of everyday routines.

“Physical activity has really been socially engineered out of our day-to-day lives, from even as simple as the majority of the work we do no longer requires physical labour,” says Vanderloo.

“Can you do two 10- or 15-minute brisk walks? If you do, make sure that you have deodorant or face wipes or dry shampoo at your desk at all times so that that doesn’t become a barrier.”

Adults who put in more than 7,500 steps per day likely meet the guidelines, but only 52 per cent of adults do this, says the report, released Tuesday. About 29 per cent get between 5,000 and 7,499 steps per day.

Those with fewer steps are considered sedentary, and represent about 18 per cent of adults.

Vanderloo says Canadians generally spend too much time in a seated or reclined position. The study cites Statistics Canada data that found about 86 per cent of adults are sedentary for more than eight hours per day, excluding sleep time.

‘We’re more sedentary than before’

On an average day, adults say they spend 3.6 hours in a seated or reclined position in front of a screen.

“We’re more sedentary than before. Getting people to move more is always a focus but now we need to also reduce sedentary and sitting behaviour which is also detrimental,” says Vanderloo, suggesting office workers take more frequent “standing breaks” or “walking meetings.”

Those aged 18 to 64 should also incorporate weight and bone strengthening activities at least twice a week, while older adults should work on improving balance to prevent slips and falls, says the report.

Vanderloo says activity levels generally decrease with age. Last year’s report card for kids found 62 per cent of three- to four-year-olds meet physical activity guidelines while only 35 per cent of five-to-17-year-olds did the same.

Staying active can be even more difficult as an adult because there are fewer organized sports activities and increased fear of injuries, says Vanderloo.

The report gave government a B- for promoting physical activity, but calls on all levels of government to ensure facilities and programs cater to adults as well as kids.