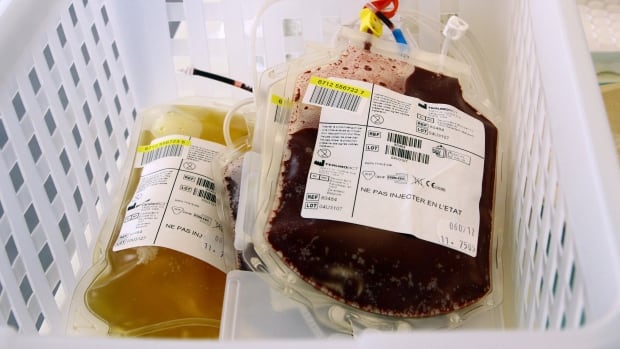 Plasma is a clear component of blood processed to manufacture therapies such as immune globulin (or immunoglobulin, IG), which  has doubled internationally in the past decade, the non-profit organization said.

Currently, about 14 per cent of the immune globulin that’s vital to Canadians with inherited immune disorders is supplied domestically. The rest comes from the global market.

“This is ultimately all about making sure we have enough plasma under our control in Canada to ensure secure supply of immunoglobulin for Canadian patients who need it.”

It’s estimated 10,000 Canadians receive IG and other plasma treatments every year. About 2,500 have a genetic life-threatening illness where IG is the only option.

The organization’s three dedicated collection sites will be in Sudbury, Ont., Lethbridge, Alta., and Kelowna, B.C.

The collection centres represent a first for standalone, source plasma collection of this size and scale.

Sher said Sudbury, Lethbridge and Kelowna were chosen because they scored highly on criteria such as the size of the volunteer donor base as well as other demographic factors.

Sudbury is scheduled to open first with collections underway by spring 2020, followed by Lethbridge in the fall and Kelowna in spring 2021. If the concept succeeds, more centres could open.

“They are clearly pushing forward with their plan because they know they have to collect more plasma domestically in order to provide for Canadian patients. Because they are moving forward with those three collection sites, that means that the provincial health ministers have approved the plan and they have released funds in order for CBS to go ahead,” Lanteigne said.

In 2012, CBS announced the closure of a plasma collection site in Thunder Bay, Ont., citing a decline in hospital demand.

In July, the private company Canadian Plasma Resources, which pays people for plasma, was given permission by Health Canada to double the frequency of its collections.

Canadian Plasma Resources can now collect from a person twice per week, up from once every six days. The company runs clinics in Moncton, N.B., and Saskatoon.

Lanteigne objects to doubling the rate of paid collections.

“For some bizarre reason the federal government is working to undermine our public health-care system’s success solely so a private company can make a profit. It’s unconscionable and Health Canada needs to reverse that decision.”

Health Canada has said the increased frequency “will not compromise the safety of Canada’s blood system.”