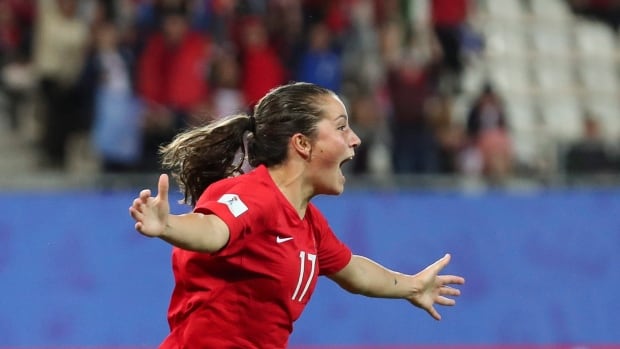 UCLA coach Amanda Cromwell will be sad to see the 21-year-old midfielder from London, Ont., go.

‘Epitome of a box-to-box midfielder’

“Jessie’s one of the best midfielders to ever play college soccer in America,” Cromwell said in an interview. “She’s someone that can dictate the tempo of a game. She can score goals. Her work rate is phenomenal defensively. She can block a shot at one end and then go score at the other end in a few moments.

“She’s just the epitome of a box-to-box midfielder that has great vision, great feeling for the game and makes everyone around her better.”

Fleming has 25 career goals and 22 assists with the Bruins, starting 71 of her 74 games. And, on Thursday, she was named one of three finalists for the MAC Hermann Trophy, which goes to the top NCAA soccer player. She was also a finalist in 2017.

“I’m getting inquiries from pro coaches about her — or have been for the last year,” said Cromwell. “Everyone knew she was staying in college and wanted to get her engineering degree. I respect her so much for that.”

“She’s just one of those kids you just want to clone,” she added. “You want a player like that every year. But the level she is and quality of student and person, the whole package — you maybe get one of those kids once every 10 years.”

Fleming was 15 when she made her senior debut for Canada in December 2013, the second-youngest to ever play for Canada at the time. Her cap count currently stands at 70, including 58 starts.

She scored and was named player of the match in Canada’s 2-0 win over New Zealand at this summer’s Women’s World Cup in France.

Fleming wasted little time making her mark at UCLA, scoring twice in her debut against the University of Florida just nine days after helping Canada win bronze at the 2016 Rio Olympics.

The five-foot four midfielder also turned heads with some magic footwork in that 4-3 loss to Florida. Confronted by a would-be tackler near the sideline, Fleming backheeled the ball with her right foot to her left. Still going at top speed, she tapped the ball around one side of the defender and went around the other, collecting the ball behind the flailing Gator.

Fleming had shown more of the same in the Olympic bronze medal match in Sao Paulo. With Canada leading 1-0, Fleming stole the ball from a Brazilian early in the second half and danced her way around several defenders on the right flank. She found Deanne Rose in the penalty box who, in turn, fed Christine Sinclair for what proved to be the winning goal.

Fleming routinely shows her technical wizardry in practice, pivoting on a dime or pulling down a high ball with her boot as if attached by Velcro.

Fleming recorded team-highs of 11 goals and 27 points in 2016 en route to being named the Top Drawer Soccer Freshman of the Year and a third-team All-American (only the fourth UCLA freshman to earn NSCAA All-America honours).

In 2017, she earned first-team All-America honours.

Although she missed half of the 2018 season while on national team duty, Fleming had five goals and five assists in just 11 games and was a first-team All-Pac-12 selection.

This year, Fleming is a finalist for the Senior CLASS Award, honouring student-athletes who excel on and off the field (she is majoring in materials engineering and minoring in environmental science). She also became only the third player in UCLA history to earn first-team all-conference honours all four years.

Fleming’s time at UCLA has coincided with some white-knuckle trips to the NCAA tournament.

In 2016, the Bruins lost to West Virginia in the third round after Fleming’s 89th-minute goal tied the game at 1-1 and forced a penalty shootout. The Mountaineers won the shootout 4-2 with all four successful spot kicks coming from Canadians (Carla Portillo, Ashley Lawrence, Amandine Pierre-Louis and Kadeisha Buchanan). Fleming missed her penalty.

Fleming scored on a second-half penalty in a losing cause in the 2017 championship game. The Canadian is one of eight current Bruins who played in that final.

Last year, UCLA lost a quarter-final penalty shootout at North Carolina after rallying from a 2-0 deficit. Fleming missed her penalty in the 4-2 shootout loss.

The Bruins have been dominant so far at this year’s tournament, however.

There are two other Canadians on the UCLA roster. Kennedy Faulknor is a junior forward from Markham, Ont., while Shana Flynn is a redshirt freshman defender from Brampton, Ont.

The 20-year-old Faulknor, a defender converted to a forward at UCLA, has won four senior caps for Canada. She was 16 years when she made her debut for Canada in December 2015, becoming the youngest centre back to ever play for Canada.

Faulknor played in 13 games this season (including seven starts) with two goals and two assists. A hamstring injury sidelined her recently but Cromwell says she should be good to go Friday.

Flynn, 19, is a Canadian youth international who missed the 2018 season due to a knee injury and has seen limited playing time off the bench with the Bruins this season (125 minutes in eight games).

Washington State has two Canadians on its roster but neither will feature at the College Cup. Ebony Clarke, a midfielder from Richmond, B.C., is recovering from a torn anterior cruciate ligament while goalkeeper Aly Hay is a redshirt freshman from Vancouver.

Fleming should exceed 6,000 minutes played as a Bruin at the College Cup. She enters the final four with 5,918 minutes under her belt.