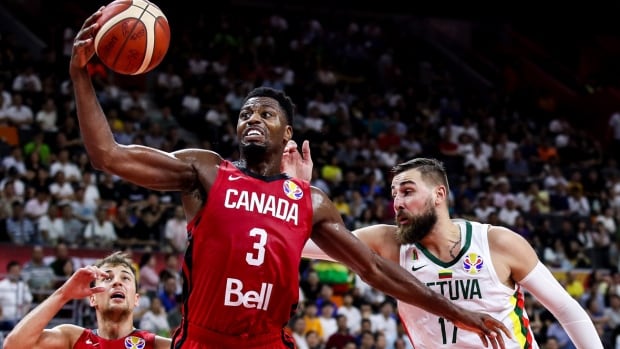 Canada’s hopes of advancing at the FIBA World Cup died with a 92-69 loss to Lithuania on Tuesday in Dongguan, China.

Kyle Wiltjer had 24 points, while Cory Joseph had 15, but the seventh-ranked Lithuanians — who’d routed Senegal by 54 points two nights earlier — were too much for the undermanned Canadians, who are missing all but two of their NBA players in Joseph and Khem Birch.

The game was a must-win for the Canadians, after they lost their opening Group H game 108-92 to Australia on Sunday.

While Tuesday’s loss prevented Canada from advancing, and killed what was already a slim hope of clinching one of the seven Olympic berths up for grabs at the World Cup, the work isn’t done. On the line are 16 berths for one of the four second-chance Olympic qualifying tournaments next June. The winner of each of the four six-team qualifiers gets a ticket to the Tokyo Games.

Mammoth task to qualify for Olympics

Canada caps the preliminary round against Senegal, who are also 0-2, on Thursday before travelling to Shanghai for two classification games that could clinch them a spot in a second-chance qualifier.

Canada’s World Cup story could have been far different. This summer promised to be a coming-out party for the country’s national program, the year that finally saw a team stocked with NBA players. Canada Basketball listed 17 NBA players on its camp invitation list, but ended up with just Birch and Joseph. Kelly Olynyk was injured in exhibition action.

Everyone else? They passed on national team duty, leaving a team comprised of mostly European-based players — including five Canadian university products — the mammoth task of trying to qualify for Tokyo.

Australia also advanced from Group H after an 81-68 victory over Senegal in Tuesday’s early game.

The Canadians are making their first World Cup appearance since the 2010 tournament in Turkey, where they went 0-5 and finished 22nd out of 24 teams. Canada’s last World Cup win came 17 years ago when they beat Venezuela to finish 13th in Indianapolis.

Lithuania has just two NBAers in Valanciunas and Domantas Sabonis, but the players’ level of commitment to their national program is unmatched. Valanciunas, who called basketball Lithuania’s “second religion,” is playing his 13th straight summer with the national team.

The overmatched Canadians certainly couldn’t be faulted for their effort Tuesday at Dongguan Basketball Center. They were scrappy on the defensive end, but had trouble generating offence. They never led and trailed 24-14 to end the first quarter.

The Lithuanians compiled a 16-point lead early in the second, but Canada fought back to cut the deficit to nine points. Lithuania took a 46-36 lead into the halftime break.

Lithuania went ahead by 15 midway through the third, but Canada clawed back and a beautiful pass from Kevin Pangos to Brady Heslip for a three-pointer cut the difference to nine points. All momentum fizzled at that point though, and the Canadians trailed by 16 to start the fourth.

In a repeat performance of Sunday’s opener, Canada ran into foul trouble early. Coach Nick Nurse was a picture of frustration, shaking his head in disbelief as Pangos headed to the bench after picking up his second foul four minutes into the game. Birch followed him a couple of minutes later with a pair of fouls. Melvin Ejim sat out most of the third quarter after picking up four fouls.