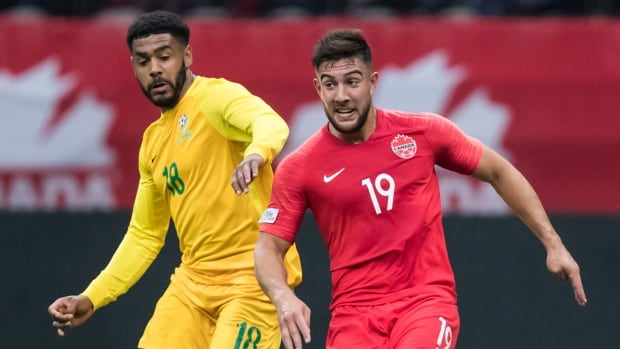 The victory in the fourth and final CONCACAF National League qualifying match means Canada will be represented at both the Gold Cup this summer and in Nations League action next fall.

Jonathan David and Junior Hoilett also scored for Canada (4-0-0) while captain Atiba Hutchinson had an assist.

WATCH | Cavallini scores a brace as Canada qualifies for the Gold Cup:

Lucas Cavallini scored a pair of goals in Canada's 4-1 win over French Guiana. With the win, Canada qualify for both the Gold Cup this summer and Nations League action next fall. 1:04

Canada got on the board in the 12th minute after Hoilett popped a shot from the top of the box into the bottom left corner of French Guiana's net.

The 28-year-old native of Brampton, Ont., now has five goals and seven assists in 22 appearances for the national team.

A bad pass from Canada's Sam Piette led to an even score midway through the first half.

The Montreal Impact midfielder was looking to get the ball back to Borjan, but didn't see Rimane moving in.

The French Guiana captain forced the ball through Borjan's feet and punched it into the wide-open net.

The goal was the first Canada has conceded since John Herdman took over as the squad’s head coach in January 2018.

The Canadians took back the lead in the 39th minute thanks to a beautiful passing sequence where Jonathan Osorio sailed the ball to David, who sent it to the feet of a diving Cavallini. The 26-year-old forward slid the ball into the net.

David added another tally just two minutes later. He first headed the ball forward, then fired it in past Petit-Homme.

The 19-year-old Ottawa-raised striker now has four goals in four appearances for the Canadian national team.

Cavallini struck again in the 50th minute, heading in a cross from Mark-Anthony Kaye. Petit-Homme got a hand on the ball but couldn't stop it from rolling into the net, making the score 4-1 Canada.

The Toronto native now has six goals and an assist in 12 appearances with the national team.

Davies cheers along with crowd

Canada was without teen soccer star Alphonso Davies on Sunday.

The game was expected to be a homecoming for the 18-year-old former Vancouver Whitecaps midfielder, but Davies injured his knee in Bayern Munich's 6-0 rout of Mainz earlier this month, the same game where he scored his first Bundesliga goal.

While he wasn't in the game, Davies was cheering from the crowd of 17,124.

He signed autographs and took photos with fans before kickoff and was given an award for being named the 2018 Canadian player of the year in a pre-match ceremony.