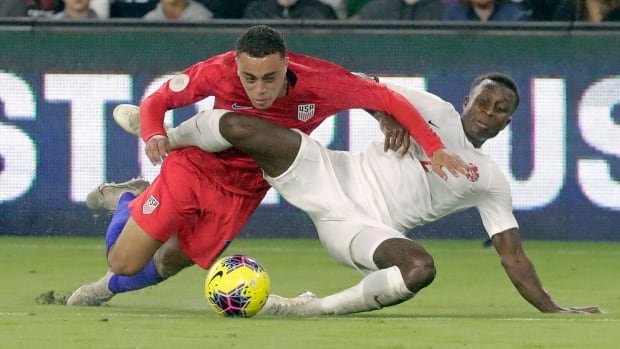 Then the match started and the United States surged early, while Canada unraveled and fell 4-1 in a Group A CONCACAF Nations League rematch on Friday in Orlando, Fla.

The loss for the Red and White comes exactly one month after their historic win over the Americans that was supposed to catapult the program forward.

One massive step forward last month, two steps back Friday night. Canada has not defeated the Americans on their home soil in a competitive match since 1957.

“As a coach you come into these matches and make decisions,” said Canada’s John Herdman. “We anticipated that U.S. press and we knew we needed to be more direct.”

After what was described by many south of the border as an embarrassing defeat in Toronto in October, the American side didn’t disappoint. Just two minutes into the match, in front of a small but boisterous home crowd, the U.S. opened the scoring early and never looked back.

Not too long after that, in the 23rd minute, after some sloppy play by Canada the Americans struck again.

The nightmarish night continued for the Canadians. In the 34th minute an uncontested header by Aaron Long made it 3-0.

Tempers flared late in the first half as the Canadians tried to mount any sort of momentum on the dew-covered field because of the humity in Orlando.

In the second half, Canada tried to mount a miracle comeback, scoring in the 72nd minute as Steven Vitória headed the ball into the net off a corner. But that was as close as they would get. The Americans added a late goal for good measure to make the final 4-1.

“We’ve got to learn that if you make mistakes at this level you’re going to get punished,” said Herdman. “We’ll go back to the drawing board and have to think it through.”

Prior to the match, American coach Gregg Berhalter penned a letter to the American supporters following their defeat in Canada, saying that the team wouldn’t forget the night they lost in Toronto and that it would “serve as fuel for the fire” and that they would “seek some measure of redemption.”

The Americans charged at the Canadians early and when they did, Canada didn’t have a response.

Coming into the match Canada was in the driver’s seat in Group A having won its first three games but now everything is up in the air and up for grabs.

A win, even a draw for Canada on Friday night against the Americans, would have guaranteed them a Nations League final four spot and would have also earned them valuable points in the FIFA world rankings — important steps in Canada’s pursuit of getting to Qatar 2022. But now the journey has gotten a little more challenging.

Canada is currently in the top-six among CONCACAF teams but Friday’s loss makes things too close for comfort as El Salvador, Curacao and Panama are close-by. A top-six spot is where Canada needs to be by the time next June rolls around to ensure a spot in the Hexagonal (the Hex) for World Cup qualifying. The Hex is the most direct path for World Cup qualifying in the CONCACAF region.

Should the Canadians not qualify for the Hex they would then have to compete in a secondary qualifying event with the winner of that then facing the fourth-place finisher from the Hex in a two-game series. It gets a little more complicated. The winner of that would then have to play a two-game, home-and-home playoff against a nation outside of the Concacaf to decide a World Cup berth — a scenario Canada wants to avoid.

Herdman, who fired up his squad last month by talking about playing with “blood, guts and thunder”, had also been stressing playing consistent soccer. He knows his squad needs to string together a number of solid performances to be taken as seriously as he’d like.

While fans were celebrating October’s win over the U.S., Herdman was quick to temper the enthusiasm and expectations.

“It comes down to will. That’s what will be working on and building consistency,” he said in the lead-up to the game.

His frustration was evident during the first half of Friday’s game as he paced along the sidelines, yelling at his players to continue to be aggressive despite unravelling early in the match — clearly this performance lacked the consistency Herdman so badly wants to see from his team.

For all the momentum and good will that was earned in that first victory over the United States in 34 years, Friday night’s loss is yet another setback for a side and program trying to make strides in the soccer world.

“We came in here to get a result. We just weren’t clinical and they were,” said Herdman.