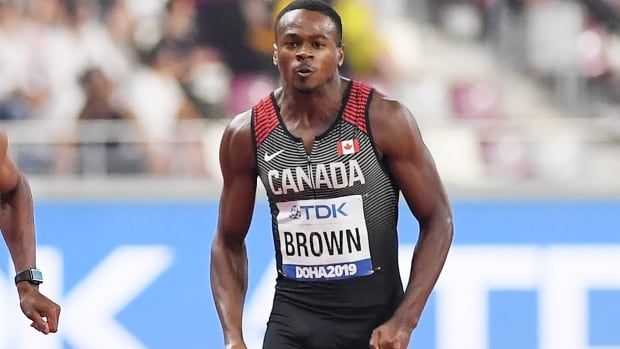 All three Canadian men in the 200 metres at the track and field world championships are through to the semifinals.

Reigning Canadian champion Aaron Brown and Andre De Grasse, who earned a bronze medal in Saturday’s 100, won their heats while Brendon Rodney was third. The top three in each of the seven heats and next three fastest qualified for Monday’s semifinals at 1:50 p.m. ET in Doha, Qatar.

“I worked a little harder than I wanted to,” the Toronto native, who finished eighth in the 100, told Scott Russell of CBC Sports. “I ran [Saturday] night twice and it took a lot out of my body so I was trying to run as relaxed as possible, but I definitely wanted to win the heat.

“It’s a grind. Everyone who’s doubling [up in events] knows how it is. It’s definitely a marathon … but I’m up for the challenge.”

De Grasse returned to the track at Khalifa International Stadium after clocking 9.90 in the 100, a personal best that beat the Markham, Ont., sprinter’s 9.91 from the final at the 2016 Olympics in Rio.

“Coach [Rana Reider] told me to blast out of that first 50, 60 [metres], come off the turn and see where you’re at and if you’re in good position, shut it down and get ready for [Monday] because we barely got any rest last night [after a late 100 final].”

“I’m happy with that time and ready for [the semifinals],” said Rodney, who noted he’s in shape to repeat his 19.96 PB at the Rio Olympic trials in 2016. “I just have to get in the lane and execute. Anything can happen from there.”

WATCH | Brendon Rodney qualifies 3rd in his heat for semifinals:

Coleman a late scratch for 200m

Meanwhile, a day after winning gold in the 100, Christian Coleman’s name was removed from the start list for the 200 heats on Sunday.

“Just feeling a little sore,” Coleman said, while adding he would be available for the 4×100 relays, which begin Friday.

With Coleman out of the mix, the path gets clearer for Lyles, who has the world’s leading time this year at 19.50 seconds. De Grasse is expected to be in the mix, as will Divine Oduduru of Nigeria, the NCAA champion at both 100 and 200.

Coleman won the 100 in a runaway, clocking a 9.76 PB and beating Justin Gatlin to the line by .13 seconds, the largest margin of victory at worlds or the Olympics since 2011.

The 25-year-old McBride faded in the final metres of the men’s 800 semifinals on Sunday and crossed the line in one minute 46.21 seconds. Kenya’s Emmanuel Korir ran 1:45.19 to secure the eighth and final spot for Tuesday’s final at 3:10 p.m. ET.

WATCH | McBride: ‘I just didn’t have as much as the other guys’:

Canada’s Brandon McBride reflects on not advancing to the 800m final. 1:09

“I found myself out of position the entire race,” said McBride. “I was running on the outside of Lane 1 … and you can’t do that against the best guys in the world.”

At 2017 worlds in London, McBride led midway through the final, faded and finished eighth in 1:47.09.

In Saturday’s heats, the Canadian-record holder shook off a potential disaster while jockeying for position with Ryan Sanchez of Puerto Rico and Peter Bol of Australia before winning his heat in 1:45.96.

Take your losses just like you take your wins, with grace.

The Windsor, Ont., native arrived in Doha fresh off a 1:43.51 PB and third-place finish at the Diamond League Final in Zurich. McBride won his third Canadian title in four years on July 27 and a month later topped the Diamond League field at the Meeting de Paris.

Crystal Emmanuel bows out in 100 semifinals

Crystal Emmanuel’s attention is squarely on the women’s 200 metres, her signature race, after failing to qualify for Sunday’s 100 final.

The Toronto runner stopped the clocked in 11.29 seconds, only 1-100th of a second faster than she was Saturday when the 27-year-old Emmanuel squeezed her way into the semis.

“I’m proud of myself and gave it my all,” she told Scott Russell of CBC Sports.

She has run the 200 five times in 2019 with a season best of 22.87 seconds at the recent Diamond League Final in Zurich, where she placed seventh.

Shelly-Ann Fraser-Pryce of Jamaica has won her fourth world championship gold medal in the 100.

After revealing a new rainbow-dyed hairstyle, she clocked 10.71 in front of a sparse crowd in the Qatari capital.

Dina Asher-Smith of Britain took silver at 10.83 ahead of Marie-Josee Ta Lou of the Ivory Coast at 10.90.

Defending champion Tori Bowie of the United States withdrew before the semifinals. No reason was given, but injuries have hampered her form over the last year.

When Nigerian sprinter Divine Oduduru finally did fall asleep in the wee hours of Sunday morning in Doha, he still had no idea whether he’d be running at the world championships or kicked out of the meet.

Because of a mix-up by their nation’s track federation, Oduduru and teammate Blessing Okagbare were each disqualified after they didn’t show up for the 100-metre races that they never intended to run. Only after an appeal and a long wait did they find out they were back in.

“It’s tough, but for you to be a great athlete, you have to have a great attitude,” Oduduru said.

The problems stemmed from a rule that states that if athletes don’t show up for races, they’re disqualified from the rest of the meet.

Oduduru and Okagbare had told their federation they weren’t running in the 100, but the federation put their names on the entry form anyway. They had to appeal the decision, and not until 2 p.m. Sunday — about five hours before race time — did Oduduru actually know he was in.

CBC Sports has exclusive live coverage of the 2019 World Track & Field Championships from Sept. 27-Oct. 6. Visit the stream and broadcast schedule, You can also add the complete event schedule to your calendar.