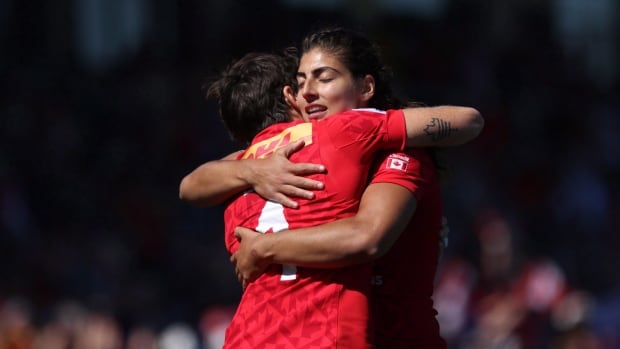 The Canadian women’s rugby sevens squad stormed to a 43-0 win over Brazil but lost 34-10 to the U.S. on Friday to end pool play with a 2-1 record at the World Rugby Sevens Series in Dubai.

Canada finishes second in Pool A and will move on to face France, the top team in Pool C, on Saturday in the Cup quarter-finals.

In their game against the Americans, Canada found themselves in a 17-0 hole at halftime before Bianca Farella managed to reply for her team. However the rout was on as Kirstie Kirshe scored her second of the match and Cheta Emba added two more tries of her own.

Kaili Lukan had Canada’s only other try against the U.S.

It was a much different story in Canada’s first match on Friday. Four different Canadians scored first-half tries to race out to a 24-0 lead against the outmatched Brazilians.

Brittany Benn, in her first tournament back from injury and sporting a bandage over her nose, got the scoring started with a long run up the sideline.

Charity Williams then added her second try in Dubai, before Kaili Lukan added the team’s third try to go up 15-0 less than three minutes into the match. Sara Kaljuvee also ran in for a score.

Farella, who notched a double in the team’s opening 24-19 win over Russia, matched the feat against Brazil after sitting during the first half.

On the men’s side, the Canadian men took a 31-7 loss to New Zealand on Friday, and wrapped up pool play with a 31-14 win over Wales for a third-place finish in Pool C.