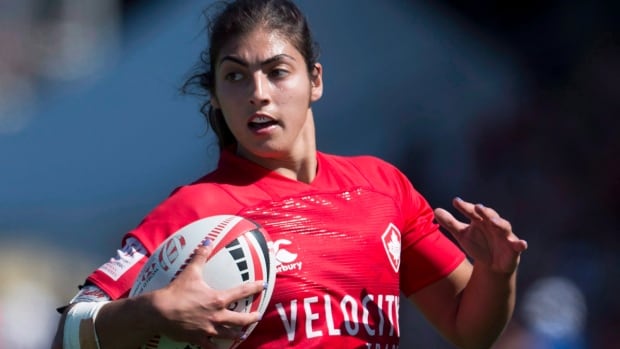 It was a mixed result for Canada’s teams at the HSBC World Sevens Series in Dubai on Thursday.

The Canadian women’s rugby sevens team got off to a roaring start, but needed to hold on in the second half for a 24-19 win over Russia, while the men’s team fell 19-12 to Samoa..

A pair of tries from Bianca Farella and one from captain Ghislaine Landry paced the Canadian women to a 19-0 lead at halftime.

Russian captain Alena Mikhaltsova broke the Canadians’ monopoly on possession in the second half, getting her team on the board and cutting the Canadian lead to 12 points.

Elena Zorokova scored another to trim the Canadian lead to seven before Charity Williams put the finishing touches on an offload-heavy control play to stretch the lead back to 12.

Zorokova added another and a conversion but time expired on the Russian comeback attempt.

On the men’s side, tries from Nathan Hirayama and Josiah Morra helped the Canadians to a 12-12 tie at the half.

Starting the seconfd half, Canada looked to have an advantage after Samoa’s Joe Perez earned a yellow card with a high tackle. However, the Canadians couldn’t capitalize on the man advantage and Samoa’s Elisapeta Alofipo scored a 13th minute try which stood as the winner.