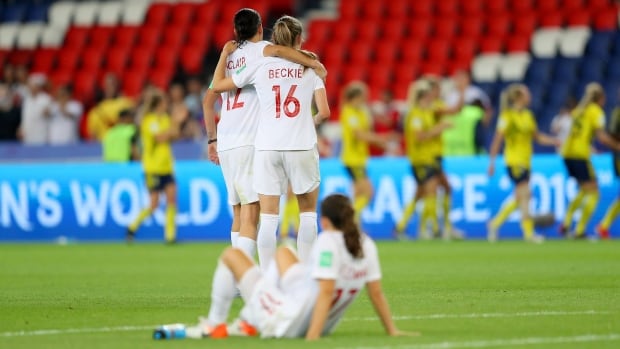 Canada has dropped two places to No. 7 in the FIFA world rankings after exiting in the round of 16 at the recent Women’s World Cup.

The world champion Americans remained No. 1 in the rankings released Friday, increasing their lead over Germany to a record 121 points. The Netherlands jumped five spots to a career-best No. 3 after making it all the way to the World Cup final, defeating Canada in group play en route.

France was unchanged at No. 4. England, which finished fourth at the tournament, fell two places to No. 5.

The Canadians had hoped to go deep into the 24-country tournament. But Kenneth Heiner-Moller’s team lost 1-0 in the first knockout round to Sweden, which rose three places to vault past Canada into No. 6 in the rankings. It’s Sweden’s first visit to the top six in more than two years.

Australia dropped two spots to No. 8 while North Korea rose two rungs to No. 9. Brazil was unchanged at No. 10. Japan fell out of the top 10, dropping four places to No. 11.

Sinclair believes that while the last two World Cups haven’t gone as planned, Canada still finds a way to the podium in Olympics. 1:41

The Canadian women also fell down the rankings after the 2015 World Cup on home soil, where they lost to England in the quarterfinals. The Canadians entered that tournament in eighth spot and fell to No. 11 in the post-competition rankings.

In releasing the post-2015 tournament rankings, FIFA pointed to Canada managing just two wins against lesser-ranked opposition (China and Switzerland) in five games at the event. It was deja vu all over again this time with Canada only beating Cameroon (which rose five places to No. 41) and New Zealand (which fell four spots to No. 23) in its four-game appearance in France.

Canada fared better after winning bronze at the 2016 Rio Olympics, climbing six spots to No. 4. It marked the first time that Canada had cracked the top five, surpassing its previous high of seventh.

The Canadian women dropped a spot in September 2017 — after the UEFA Women’s Championship moved England up two places to No. 3 while bumping France to No. 4 and Canada to No. 5.

Canada returned to No. 4 in March 2018, at the expense of Australia. But it slipped to No. 5 in the next edition of the rankings.

Further down the latest rankings table, the Philippines (No. 67, up 7) and India (No. 57th, up 6) are the biggest climbers thanks to their Olympic qualifying play.

With qualifying games for the 2020 Olympics also played in the past month, there are a record 158 national teams ranked. That leaves 53 FIFA member federations without an active team in the rankings.