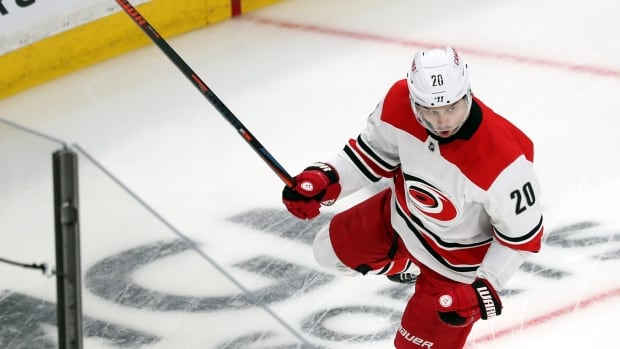 Now all Montreal Canadiens general manager Marc Bergevin can do is wait.

Bergevin and the Canadiens made one of the most aggressive moves of the NHL’s free agency period on Monday by tendering an offer sheet to restricted free agent forward Sebastian Aho of the Carolina Hurricanes.

The 21-year-old Aho has accepted the proposed five-year contract with an average annual value of US$ 8.454 million. If Carolina does not match it, the Canadiens must send a first-, second- and third-round pick to the Hurricanes.

Carolina has seven days to make a decision. In the meantime, Bergevin cannot pursue other high-priced free agents — like much-needed defenceman Jake Gardiner — with his cap space now in limbo.

“You take a risk when you do that, guys are getting signed,” said Bergevin on Monday afternoon. “When you have that cap space tied up, you can’t go out and spend it, because then you get the player and you’re in a bad position. That’s the risk you take. That’s the business we’re in.

“We felt, even if it doesn’t happen, we still have a very good hockey team.”

The offer sheet for Aho forces Carolina — who rarely spend up to the NHL’s salary cap — into a tough position. Reports say the Canadiens purposely frontloaded the deal to pay Aho more than US$ 21 million in the first 12 months in signing bonuses alone. Aho’s actual salary would reportedly be $ 700-750,000 per season.

According to capfriendly.com, Carolina had over $ 22 million in cap space left and were actually below the NHL’s $ 60.2-million salary floor.

Offer sheets are rare in the NHL because they’re expensive, rarely successful, and also force the hand of opposing general managers. The last offer sheet tendered was in 2013 when the Calgary Flames gave one to Ryan O’Reilly. That deal was matched by the Colorado Avalanche.

Bergevin refused to admit there’s an unspoken law between general managers to avoid tendering offer sheets to restricted free agents, especially when structured in a way to take advantage of a cash-strapped team.

“When you make an offer like this, you can put a team in a vulnerable position,” said Bergevin. “If there’s an unwritten rule, nobody told me about it. We all have a competitive edge, and this is part of the collective bargaining agreement. It’s within the rules. I’m in charge of the Montreal Canadiens and not the other teams.”

A visibly vexed Don Waddell, the Carolina Hurricanes general manager, said he would take his time before making his decision.

“There’s no reason to do it immediately,” said Waddell at a press conference. “Probably helps the other team if I did it immediately because then they can go out and sign more players and that might help them right now.

In a tongue-and-cheek tweet sent out by the Carolina social media team, the ‘Canes polled their followers to see if they should match the offer sheet for Aho. The only two options were “Yes” and “Oui” (French for “Yes”).

Will we match the offer sheet for Sebastian Aho?

“He has the potential to be a No. 1 centre on this team,” said Bergevin. “Look at what he did in Carolina in the regular season and the playoffs. He’s really young and fits well with our young team here.

“With him in the lineup, he would make our team better.”

Bergevin made a pair of cap-clearing moves on Sunday in preparation for the Aho offer sheet.

The Canadiens sent Andrew Shaw and his $ 3.9 million annual cap hit to the Chicago Blackhawks before trading away Nicolas Deslauriers to the Anaheim Ducks. Montreal did not retain any salary in either deal.

Earlier on Monday, the Canadiens signed Keith Kinkaid to a one-year, $ 1.75-million contract in the opening minutes of NHL free agency.

The Canadiens needed a solid backup goalie to take some of the pressure off Carey Price, who played 66 games last season. Antti Niemi, who signed with Finnish club Jokerit of the KHL last month, managed only eight wins as Price’s backup last year.

“I’m really excited to work with him (Price) and bounce ideas off each other,” said Kinkaid on a conference call from his home in Hoboken, N.J. “I can gain a lot of skills from him and see how he goes about his day on and off the ice.”

Kinkaid has played 151 career NHL games since making his debut in 2012, all with the New Jersey Devils. He has a career 2.90 goals-against average and a .906 save percentage.

The Canadians also signed forward Riley Barber to a one-year, two-way contract. Barber has spent the past two seasons with AHL Hershey.