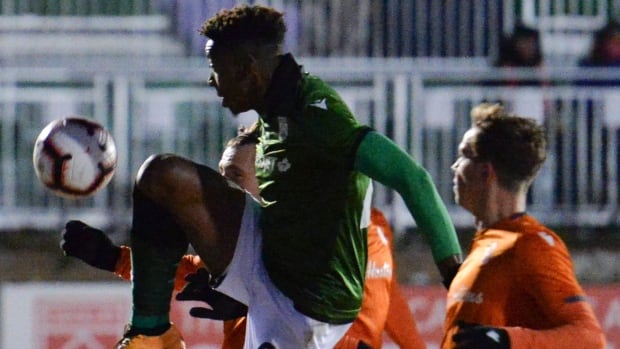 Both Cavalry FC and Forge FC braved sub-zero temperatures in Calgary on Wednesday as the top two clubs in the CPL squared off at an icy ATCO Field. The two sides will meet three more times in the next few weeks (including the two-legged CPL Finals), but it was ultimately hosts Cavalry who emerged with a 2-1 victory on the day.

The first half saw no goals, but the field seemed tilted toward Forge’s net as Cavalry attacked with over 60 per cent possession. With the wind at their backs, the Cavs had plenty of time in their opponents’ half, although they weren’t able to get on the board. Dominique Malonga did put one into the net for Cavalry in the 30th minute, but his effort was flagged after a controversial offside call.

It was Malonga again, however, who ultimately gave Cavalry a lead. Midway through the second half, he fought his way into the box as Jordan Brown tried his luck from well outside, and Malonga was there to put away the rebound for his 10th goal of the year.

After falling behind, Forge started to carve out some more possession as they pressed further up the pitch in search of a goal. The visitors equalized in the 78th minute, as Anthony Novak powered into the box all alone and lifted it over Cavs keeper Marco Carducci’s left arm.

The hero of the night, though, was destined to be Malonga. In the 84th minute, he did what he does best and pushed his way through a crowd in the box, finding Nathan Mavila’s low cross and re-directing it goalward with his right foot. Third in the Golden Boot race at the start of the night, he pulled nearer to Forge’s Tristan Borges, who tops the leaderboard with 12 goals, and he drew level with second-place Terran Campbell of Pacific FC.

Adding to the bad news for Forge, centre-back Bertrand Owundi collected a yellow card in this one, which means he’ll miss the first leg of Finals 2019 due to card accumulation.

The HFX Wanderers FC and Pacific FC shared spoils after drawing 1-1 in a wild match that featured plenty of late thrills for the Halifax crowd to enjoy.

Pacific defender Lukas MacNaughton got things going in the 13th minute, scoring off a corner to give his team a narrow lead.

But, MacNaughton would quickly undo his good work, bringing Kodai Iida down in the box, in the 26th minute, to concede a penalty, which Luis Alberto Perea slotted into the top left corner for his third of the year.

The second half marked the return of Pacific’s Marcel De Jong. After a seven-month layoff with an Achilles injury, De Jong finally made his club debut in the 66th minute.

However he quickly made his presence felt, whipping a perfect cross to Terran Campbell from the left, which forced HFX keeper Christian Oxner to challenge well out of the box, drawing a yellow card.

De Jong would continue to cause problems for HFX, who themselves had a few good looks at goal as the minutes ticked on. Scott Firth had a shot on goal in the 86th for HFX, before De Jong found fellow substitute Issey Nakajima-Farran for another sight target three minutes later. Tomas Skublak, coming off the bench for HFX, had two late chances, too, but neither found the back of the net.