Don Sweeney’s last assist in the playoffs arrived in his final season with the Boston Bruins back in 2003 on a goal from Martin Lapointe in their only win in a first-round series against the New Jersey Devils, who went on to win the Stanley Cup that spring.

Sixteen years later, give Sweeney another helper for his beloved Bruins. At least, it certainly felt that way for the 52-year-old Boston general manager after his club’s second-round series opening 3-2 win in overtime against the Columbus Blue Jackets at TD Garden on Thursday evening.

Charlie Coyle and Marcus Johansson, two players Sweeney acquired two months ago, combined for the tying goal with four minutes and 35 seconds remaining in the third period and again early for the game-winner in the extra period.

On both occasions, Johansson set up his third-line teammate Coyle for the Bruins important victory, two days after they dispatched the Toronto Maple Leafs in Game 7 for the second year in a row.

Sometimes the depth moves made before the trade deadline make all the difference several weeks later in the playoffs.

Charlie Coyle scored his fourth and fifth goals of the playoffs to push Boston past the Blue Jackets in Game 1 of their second-round series. 1:48

Sweeney, of St. Stephen, N.B., acquired centre Coyle on Feb. 20 from the Minnesota Wild and paid a hefty price in young forward Ryan Donato and a fifth-round draft pick. It was a difficult move for Sweeney because Donato’s father, Ted, was his teammate at Harvard University and later for seven-plus seasons with the Bruins.

The 27-year-old Coyle, who won a QMJHL championship in 2011-12 with the Saint John Sea Dogs, now has five goals in eight post-season games for the Bruins. He was raised in the Boston area and adored the Bruins growing up.

“How do you like playing at home?” Another Boston-area native Chris Wagner asked his linemate after the OT winner.

Wagner just happened to be another depth move made by Sweeney last summer when he was signed as an unrestricted free agent.

It wasn’t all rosy for Coyle and the Bruins against the Blue Jackets on Thursday. After they snatched a 1-0 lead in the opening period on a shorthanded goal from fourth-line centre Noel Acciari, the Bruins had ample opportunities to increase their lead.

Instead, Boston allowed Columbus back in the game. Brandon Dubinsky and Pierre-Luc Dubois scored 13 seconds apart in the third period to pull ahead by a goal. It was Coyle’s giveaway that led to Dubinsky’s game-tying goal. 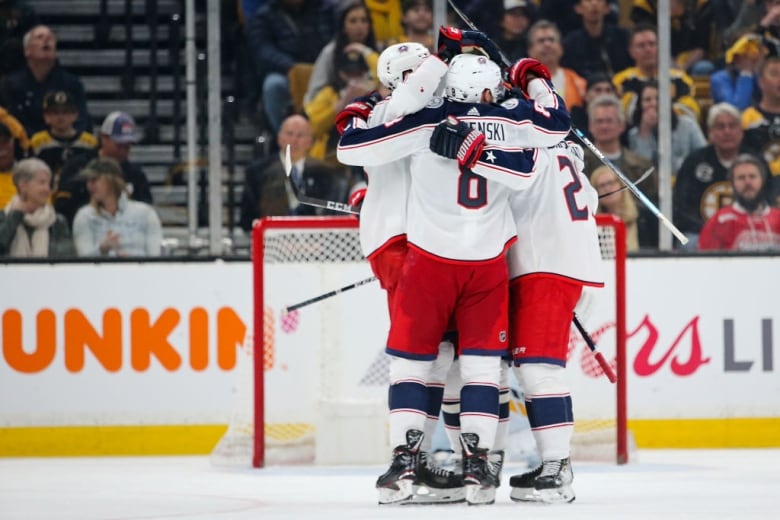 But Coyle swiftly redeemed himself in a game that once it stretched into overtime had to favour the fresh Blue Jackets.

Columbus shocked the hockey world nine days ago with a historic sweep over the Presidents’ Trophy-winning Tampa Bay Lightning. The Blue Jackets accomplished the massive upset with strong goaltending, a relentless forecheck and an effective power play.

But as they celebrated the franchise’s first playoff series victory, they realized their momentum was leaving them.

Having eight days between games isn’t easy because of the rust factor. Blue Jackets head coach John Tortorella gave his team four days off from being at the rink, put his players through three practices and a scrimmage.

The Blue Jackets weren’t sharp in the first period. They were soundly outplayed by Boston. But as the game went on Tortorella’s side pushed its way back into the game.

But then they were beaten by Coyle…with an assist from Sweeney.