Seeing children suffering with cancer when he was being treated himself broke Terry Fox’s heart and inspired his Marathon of Hope.

Now, those efforts have fuelled a unique initiative to give kids and young adults across the country a chance to live when there are few, if any, treatment options left.

Eight-year-old Marlow Ploughman of Shannonville, Ont., has relapsed four times and is on a new drug thanks to genetic testing involving a project that brings together collaborators from over 30 pediatric cancer research and funding organizations.

The girl was diagnosed at age 2½ with late-stage rhabdomyosarcoma, or cancer of the soft tissue, such as muscle, after a vine-like tumour was found in her calf, said her mother, Tanya Boehm.

After three rounds of radiation, chemotherapy protocols and at least four clinical trials, there were no therapies left to try as the cancer spread to the girl’s neck and lungs.

A program called Terry Fox PROFYLE, short for Precision Oncology for Young People, seemed to be the only hope for Marlow, Boehm said.

PROFYLE provides precision treatment by sequencing tumour samples on a molecular level and analyzing the vast amount of information at any of three labs in Vancouver, Toronto and Montreal for patients up to age 29, regardless of where in Canada they live.

Until now, such testing was not always available for young cancer patients in rural or remote areas, let alone the collaboration of scientists and researchers from across the country to guide treatment.

“It presents options and time,” Boehm said. “We were told with Marlow when the cancer came back the first time that she was going to die. … I think it’s fantastic that finally, families like ours have hope.”

Marlow’s oncologist and project leader, Dr. David Malkin of the Hospital for Sick Children in Toronto, said the focus of the five-year project is the approximately 20 per cent of pediatric cancer patients whose disease is considered hard to treat. 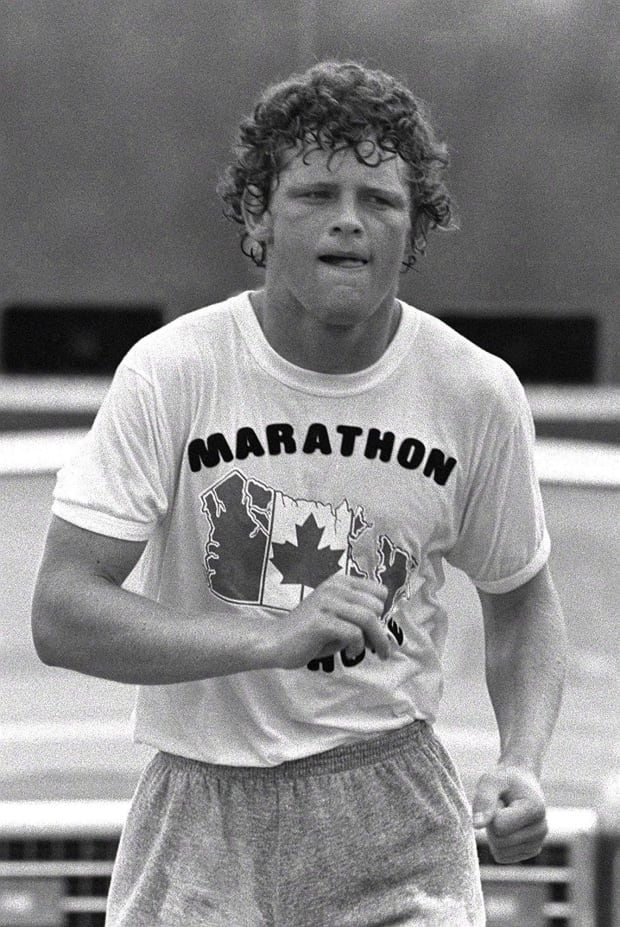 Terry Fox, shown in August 1980 during his Marathon of Hope, was 18 when he was diagnosed with osteogenic sarcoma (bone cancer), and his right leg was amputated just above the knee in 1977. The scientific director of the Terry Fox Research Institute says Fox would have been a candidate for DNA sequencing treatment if it had been an option back then. (Canadian Press)

“Every pediatric centre across the country is part of PROFYLE and several of the adult centres will also be able to enrol their patients into the study. Even in the pilot phase, we have had patients from all provinces now enrolled,” Malkin said.

About 40 people are participating in the study and about half of them have had their tumours sequenced because of the partnership that has so far provided $ 16.4 million, including $ 5 million from the Terry Fox Research Institute.

“One of the reasons that PROFYLE is so important is that the cancers that occur in young people are inherently different than they are in adults,” said Malkin.

“We need to be collecting much, much more information on the sequences of childhood and young adult tumours and personalize it and make it more precise so we can work with industry and pharma and develop ways that we can get these drugs for kids.”

About 1,900 youth under age 18 are diagnosed with cancer every year in Canada, and about a third of them would be eligible for PROFYLE, he said, adding that only two other programs in the world come close to what PROFYLE offers.

“What is unique about PROFYLE is that it’s truly national.”

Terry Fox would have qualified

Patrick Sullivan, whose three-year-old son Finn died of rhabdomyosarcoma in 2008, has raised over $ 2 million for the BC Cancer Foundation and is on the executive committee of PROFYLE, for which he has committed another $ 250,000.

He said Finn, who was “introverted with a heavy streak of silly,” would have qualified for PROFYLE, but the cost of molecular sequencing and analysis was far too high in 2008.

“It not only offers hope for families, which would have been enough for me, it offers a way to integrate this type of approach for kids, adolescents and young adults and for all Canadians,” he said.

Dr. Victor Ling, scientific director of the Terry Fox Research Institute in Vancouver, said Fox, who was diagnosed at age 18 and died four years later, would have qualified for PROFYLE.

“We did not know how to do DNA sequencing in those days, we did not have the drugs that we have now.”

Darryl Fox, Terry’s brother and a senior adviser at the Terry Fox Research Institute, said Terry was passionate about meeting young cancer patients, especially during the Marathon of Hope.

“We’re bringing not only children’s hospitals and fundraisers together, but in 1980 he united a country. He brought Canadians together for a common cause and we continue to do that and this program is an example of that.”