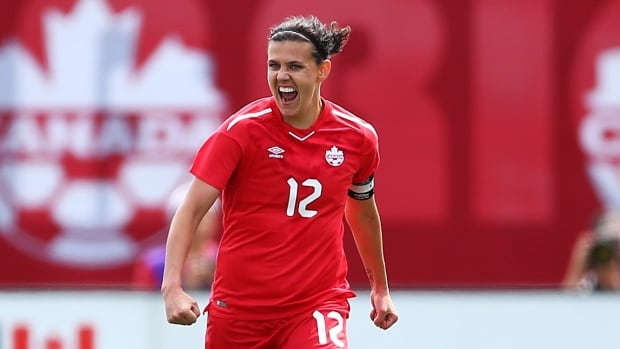 Captain Christine Sinclair, chasing history, scored the 178th goal of her international career Tuesday to give the Canadian women's soccer team a 1-0 win over Norway in its first full international of 2019 in Murica, Spain.

Substitute Jenna Hellstrom, in her second appearance for the senior side, floated a cross in the 66th minute that an unmarked Sinclair headed down into the goal from close range.

The 35-year-old from Burnaby, B.C., winning her 275th cap, is now just six goals away from tying retired American forward Abby Wambach's international record of 184 goals. For Hellstrom, a 23-year-old from Sudbury, Ont., it was her first assist for Canada.

"It's been a great camp for us just starting the season, and to get the win against quality opposition that's heading to the FIFA Women's World Cup as well is a huge bonus so we're heading home happy," said Sinclair. "We pride ourselves on our subs making an impact, and Hellstrom is a perfect example of that coming in and within a couple of minutes put in a perfect cross. We have a very deep team and you saw that today."

Sinclair came off in the 83rd minute, giving way to Janine Beckie after handing the captain's armband to Kadeisha Buchanan.

The latest goal comes almost 18 years after a 16-year-old Sinclair opened her account for Canada in a 2-1 win over Norway at the Algarve Cup, in her second national team appearance in March 2000. She had made her debut two days earlier.

Fifth-ranked Canada played Switzerland to a scoreless draw in a closed-door training match last week. The Norwegians, currently ranked 13th, were coming off an impressive 3-1 win over No. 20 Scotland last Thursday.

"It feels great to get the win and I believe there was something in our game that looked very promising. For this team to get where we are in such a short period of time is important," said Canada head coach Kenneth Heiner-Moller. "There are definitely some areas that we need to review from today, but the win against a quality side like Norway is a great start to the year as we push forward to France 2019."

Canada came into Tuesday's game with a 1-8-3 career record against Norway but had the upper hand in recent matches. The Canadians won 3-2 when they last met in November 2017 in a friendly in Spain. The two previous meetings — in 2013 and 2010 — finished 0-0 and 1-1, respectively.

Both teams are preparing for this summer's World Cup in France. Canada has been drawn in a group with the seventh-ranked Netherlands, No. 19 New Zealand and No. 46 Cameroon while Norway is in a pool with No. 3 France, No. 14 South Korea and No. 39 Nigeria.

The Canadian women are 9-4-0 under Heiner-Moller, a Dane who had served as Herdman's assistant. Three of those losses came to the top three teams in the world: the top-ranked U.S., No. 2 Germany and No. 3 France.

The other defeat was at the hands of No. 9 Sweden in Heiner-Moller's first game in charge, last February at the Algarve Cup.

Canada's next action will be at the 2019 edition of the Portuguese tournament, with games against No. 22 Iceland on Feb. 27 and No. 20 Scotland on March 1 before a final ranking match March 6.