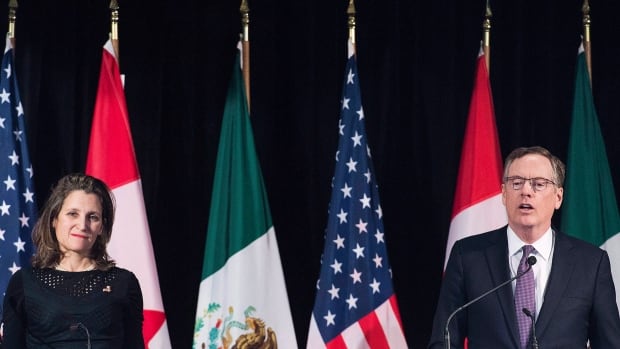 Foreign Affairs Minister Chrystia Freeland will be in Washington D.C. Wednesday to sit down with her American counterpart and hold a series of bilateral meetings with members of Congress.

Freeland and U.S. Trade Representative Bob Lighthizer will have plenty to talk about, starting with China’s ongoing trade actions against both countries. Freeland also is expected to press the U.S. on tariffs, arguing Canada would have a hard time ratifying a revamped NAFTA deal while U.S. steel tariffs remain in place.

On June 1 of last year, the United States Department of Commerce imposed tariffs of 25 per cent on Canadian steel and 10 per cent on aluminum, citing national security interests.

Canada responded with its own tariffs of 25 per cent on steel and 10 per cent on aluminum, but also slapped a 10 per cent tariff on a long list of consumer items meant to target U.S. politicians in states where those products are made.

That product list included Kentucky bourbon, lawn mowers, ketchup, maple syrup, appliances, boats, and many other items. The federal government said it was targeting goods that Canadians could otherwise buy from domestic suppliers.

Since then, the Liberal government has rolled back some of the retaliatory tariffs, including ones imposed on recreational boats, while others remain in place.

Freeland’s trip to Washington D.C. comes after Prime Minister Justin Trudeau had two telephone conversations with U.S. President Donald Trump within the past week, and another with U.S. Vice President Mike Pence today.

During the calls with Trump, Trudeau asked for an end to U.S. steel tariffs and additional diplomatic assistance in Canada’s ongoing dispute with China.

In December, Canada detained Huawei Technologies chief financial officer Meng Wanzhou at the Vancouver International Airport on an extradition request from the United States. She was later granted bail and is now awaiting court proceedings.

According to a source with direct knowledge of one of the calls with Trump last week, Trudeau reminded Trump of the blowback Canada has faced from China since Meng’s arrest, placing a special emphasis on the conditions of Kovrig and Spavor’s imprisonment.

The pair have had limited access to consular officials and are not allowed to see family or loved ones. They have been confined to single rooms without the ability to turn the lights off in their cells at night.

One month after Kovrig and Spavor were arrested, China sentenced Canadian Robert Lloyd Schellenberg to death in a sudden retrial in January. Schellenberg already had been sentenced to a 15-year jail term for drug smuggling.

Last month, a Chinese court sentenced another Canadian, Fan Wei, to death for participating in a global methamphetamine operation.

Since Meng’s arrest, China also has placed a number of trade hurdles in front of Canadian exporters — banning imports from two canola producers, tying up shipments of pork over paperwork issues and putting unusual obstacles in the way of Canadian soybean and pea exporters.

The Trump administration has signalled its concern over the plight of Kovrig and Spavor and has publicly voiced support for the campaign to free the men — but has shown itself far less willing to agree with Canada when it comes to tariffs on steel and aluminum.